Victor Garcia: 'We haven't given up' 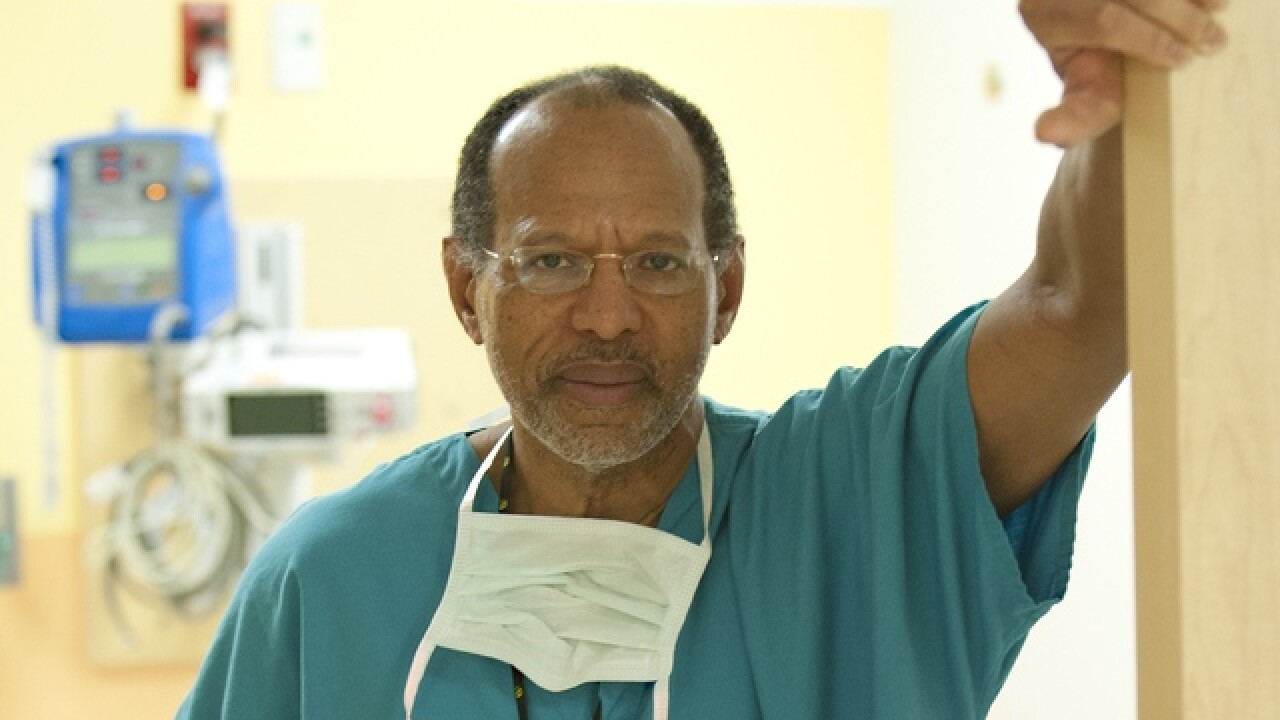 CINCINNATI — Long before the Child Poverty Collaborative ever existed, there was Victor Garcia, a pediatric surgeon at Cincinnati Children's Hospital Medical Center who was tired of treating so many kids with gunshot wounds on his operating table.

Garcia started a group called CoreChange to try to do something about the circumstances that led up to all those kids getting shot. The goal was to save Cincinnati's inner city by turning at-risk youth into assets and transforming its most blighted neighborhoods into opportunities, all while working to heal the persistent problems of poverty, violence and disease.

RELATED: Child poverty is getting even worse here

CoreChange held a massive community summit in February 2012 that drew more than 700 people from all walks of life. The initiative has had impacts that make Garcia proud. But the work has been much slower and more difficult than he expected.

"They are complex, or wicked, problems," Garcia said during a recent interview. "We have not enjoyed the success that I had envisioned, but we haven't given up."

Garcia's inspiration, work and experience with CoreChange provide valuable lessons and insights for the Child Poverty Collaborative, which formed late last year to tackle some of the same "wicked" problems Garcia has targeted.

Mayor John Cranley announced the collaborative's bold goals during his 2015 State of the City address: To lift 10,000 Hamilton County children out of poverty within five years and help 5,000 unemployed or underemployed adults get good-paying jobs.

The group will host its own summit — The Child Poverty Community Summit — from 8:30 a.m. to 12:30 p.m. Saturday at Xavier University's Cintas Center. Organizers are providing breakfast, lunch and free parking and childcare. There is space for 650, and the goal is to attract people from all walks of life, just like CoreChange did in 2012.

The CoreChange approach, in fact, has had a huge influence on the way the Child Poverty Collaborative is going about its work, said Ross Meyer, vice president for community impact at United Way of Greater Cincinnati, which manages the collaborative's work.

"Poverty's an adaptive problem, not a technical problem that requires a simple recipe to follow," Meyer said. "That framing and how we're thinking about this issue is all because of Vic's insights."

Garcia wants the collaborative to be successful, and he wants CoreChange to be part of the effort. But after being so keenly focused on inner-city poverty for the past decade, he remains concerned.

'People Are Waiting To Be Invited'

It's not that Garcia doesn't think the leaders of the Child Poverty Collaborative are smart or well intentioned.

But he has spent countless hours thinking about these issues, work he started a decade ago after a 14-year-old girl died on his operating table from a gunshot wound to the chest.

He has read everything he could get his hands on and has conferred with many of the world's foremost experts in complex problem-solving and community collaborations.

He knows most community initiatives fail.

And he believes that's largely because the well-intentioned people behind them fail to use the right approach in attacking multi-faceted, complex problems.

"My concern is that despite everybody's good intentions there are still a significant number of people who think that poverty is a problem to be solved," he said. "It's a complex issue, and there is clear understanding about complexity that you don't change a complex issue. You can influence it."

Reducing poverty isn't like engineering a bridge or boosting a profit margin, where experts do the calculations and devise the best approach, said Peter Block, an author and expert on community building who lives in Cincinnati and has worked closely with Garcia.

To truly make a difference in impoverished communities, the people who live there must be a genuine part of the effort, Block said. They must help inform the discussion and craft the strategies and connect with their neighbors.

"People are waiting to be invited. But they want to be invited by someone they trust. And they need to be invited in a way that honors and respects their knowledge and capacity," he said. "You can't invite them in as needy people we're going to fix and help. It's like trying to get your teenager to go to therapy. Forget it."

For its part, the Child Poverty Collaborative is working hard to create a "top-down and bottom-up approach," Meyer said.

"That's not easy to pull off," he said. "But we believe just as firmly that we need to have those with influence and resources and pull in the community to be part of the solution if we're going to get anything done of significance. But we also know it won't be of any consequence if we don't have insight and leadership from those actually impacted."

Garcia and CoreChange have worked hard to develop relationships in Cincinnati's poor neighborhoods and to address inner-city poverty as the complex problem it is, Block said.

CoreChange even inspired the creation of a whole new business — Waterfields, a company that grows microgreens at a hydroponic facility in the West End.

Waterfields Chief Financial Officer and co-founder Paul Leffler got involved with the business after attending the CoreChange summit in 2012.

The company's first location was launched in Lower Price Hill in late 2013. After about a year, it outgrew that location and moved to the West End. Now it operates in the West End and also has a second location back in Lower Price Hill that the company uses for administrative offices and staging, said Daniel Klemens, a co-founder who serves as Waterfields' chief marketing officer.

The indoor, urban farm grows dozens of types of tiny, living greens that it sells to chefs and retail customers. But just as importantly, Waterfields employs people from some of the city's most distressed neighborhoods.

The goal is to pay them what Klemens calls a "livable wage" — anywhere from $11.50 to $16 per hour, depending on the job — and groom them to be leaders at work and in their communities.

So far, Waterfields employs 10 people, including its five co-founders. Over the next five years, the company aims to grow that number to as many as 100 employees total, Klemens said. Eventually, the goal is to give employees the option to have an ownership stake in the company, too.

Leffler said being at Garcia's summit in 2012 inspired him to get involved on the front lines.

"The statistics are alarming," Leffler said of Cincinnati's poverty rate. "If you don't do something, you've failed before you even started."

Failure is what worries those who have put so much time into CoreChange.

Garcia is proud of Waterfields.

But he said the company could grow much faster — and employ more people — if local hospitals and other "anchor institutions" agreed to buy its microgreens to use in their corporate kitchens and cafeterias.

It's one of the many strategies that Garcia works on when he's not in the operating room or visiting with patients at Cincinnati Children's.

Still, Garcia's busy full-time job as a surgeon has meant that he hasn't been able to focus on CoreChange all day, every day, said Howard Elliott, a friend of Garcia's and president of Elliott Management Group, a local supplier diversity consulting firm.

Elliott doesn't know as much about the Child Poverty Collaborative, but he said he hopes the collaborative and CoreChange can work together and draw on each other's strengths.

"The good thing is that the community recognizes that we have a problem," Elliott said. "The bad thing is that sometimes we have people who are very smart about one thing and they think that applies to something else."

Getting this work right is important — not only because nearly half of all Cincinnati's children live below the federal poverty rate — but also because people can become disillusioned if their hopes are raised and dashed too many times, Garcia said.

He's hopeful that the corporate wisdom that is part of the Child Poverty Collaborative's leadership — and the resources those business leaders can bring to bear on the issue — can be combined with the strategies and approach of CoreChange.

It won't be enough to collect data and talk with people and issue a report with recommendations that can be checked off a list, he said.

People living in poverty must have a say. Their emotional and behavioral health has to be addressed. And any proposals that come out of this work must include ways for families to build their wealth and become self-sufficient so they can realize the hopes and dreams they have for themselves and their children.

Garcia hasn't given up.

"If anything, I'm more determined," he said.

And whether CoreChange and the Child Poverty Collaborative work closely together or not, Elliott said, the children of Cincinnati can count on Garcia and the many people he recruits to his cause.

"It's like you want to get up and march with Victor after you have a conversation because he's so knowledgeable," Elliott said. "He is passionate and inexhaustible in trying to work on this problem."

To learn more about CoreChange and how to help, click here.

To register for the Child Poverty Summit or for more information about the event, click here.

Lucy May writes about the people, places and issues that define our region – to celebrate what makes the Tri-State great and also shine a spotlight on issues we need to address. Childhood poverty is an important focus for her and for WCPO. WCPO's childhood poverty coverage can be found at www.wcpo.com/poverty.