This guy's no slacker. At age 22, Ben Schneider already has his own slackline manufacturing business 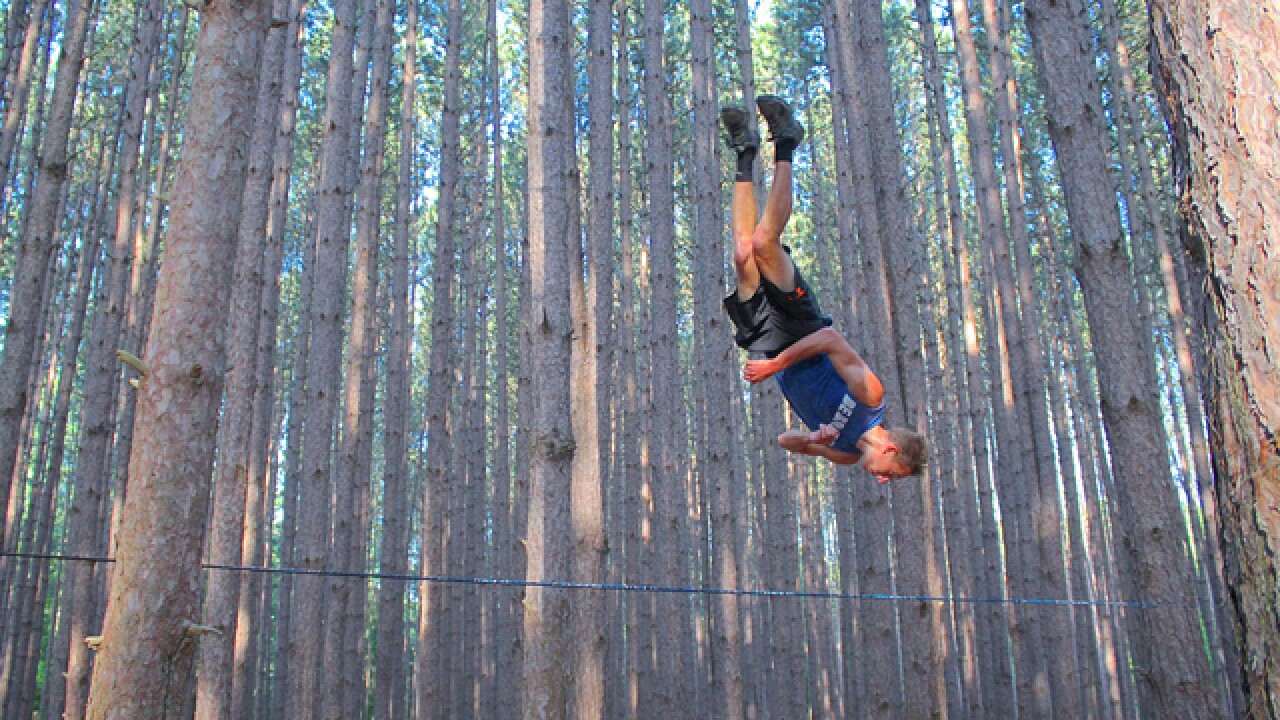 Copyright 2018 Scripps Media, Inc. All rights reserved. This material may not be published, broadcast, rewritten, or redistributed.
Provided
<p>You can perform on a slackline just about anywhere, even in the forest, as Ben Schneider shows in this photo.</p>

FAIRFIELD, Ohio -- In the early '80s, a couple of bored rock climbers in Yosemite National Park came up with a new way to use their gear. They strung nylon lines between two trees and tried to walk on it, like walking on a very loose tightrope.

And that's how slacklining was born.

According to the International Slackline Association, the sport took off around 2006 in Europe, when simple slacklining kits were introduced -- a piece of webbing, two tree slings and a tensioning system.

One Christmas, a kit like that found its way into the hands of Fairfield native Ben Schneider. He set up the line in his parents' backyard and began to practice every day. He became a specialist in tricklining, the art of doing flips, twists and other acrobatic stunts on a slackline.

Schneider is among the top five best trickliners in the United States, his friend and fellow competitor, San Diego resident Eric Hake, says.

Yoga on a slackline

It's hard to say how many slackliners there are in the United States, Hake said, but he knows that the "Slackchat" group on Facebook, which hosts discussions of all things slacklining, has more than 14,000 members.

Not all of them do tricklining. Some do yogalining -- doing yoga poses on a slackline. Some do rodeo-lining -- using a really, really slack slackline.

Earlier this month, both Hake and Schneider competed at the Dominion River Rock Slackline Competition in Richmond, Virginia, one of two competitions put on by Boulder, Colorado-based Slackline Industries. There's also a World Cup for slackliners, which was held last year in Japan, Hake said.

The winners usually get only a few thousand dollars, Schneider said. He's hoping to make money from the sport in another way.

This spring, Schneider started his own slackline manufacturing company, Ascending Slacklines. At its website, one can buy a beginner's line for $64, or the version Ben himself uses for $120.

It's a product he believes in for a sport he's wholly committed to. He spends eight hours a day, nearly every day, practicing.

"I think it's the most fun thing in the entire world," he said. "It's the only thing I can do that I never get bored of. And there's always something new to learn, just because of how hard it is to slackline."

Even with a surgically repaired neck

Schneider really shouldn't be slacklining at all. Last year, while jumping off a trampoline, he landed on his face and broke a vertebra in his neck. He's now walking around with a lot of metal in his neck, he said, and his doctors recommended he never do slacklining again.

Before the accident, he had been a sponsored athlete for Slackline Industries. The company paid for him to travel to slackline competitions and also supplied him with slacklines, he said.

At competitions, other slackline users began to ask him if they could buy one of his tricklines. When he told them they weren't for sale, he said, they would tell him they should be, because he could make a lot of money.

The accident made Schneider realize how valuable life is, he said. It prompted him to drop out of the University of Cincinnati about six months ago, where he was three years into engineering school.

Now, he spends all his time competing in slackline competitions and promoting his trickline. He'll do the latter this summer by filming spots with famous YouTube stars, he said. His Instagram account, #recklessbenschneider, has 20,500 followers.

It features pictures and videos of him holding himself upright on a slackline with one hand, walking across a 700-foot chasm on a slackline, and other crazy stunts.

"Once you start using a lot of air, and you're not using the ground … it feels like you are flying," he said.