'I'm put on this earth to raise my kids' 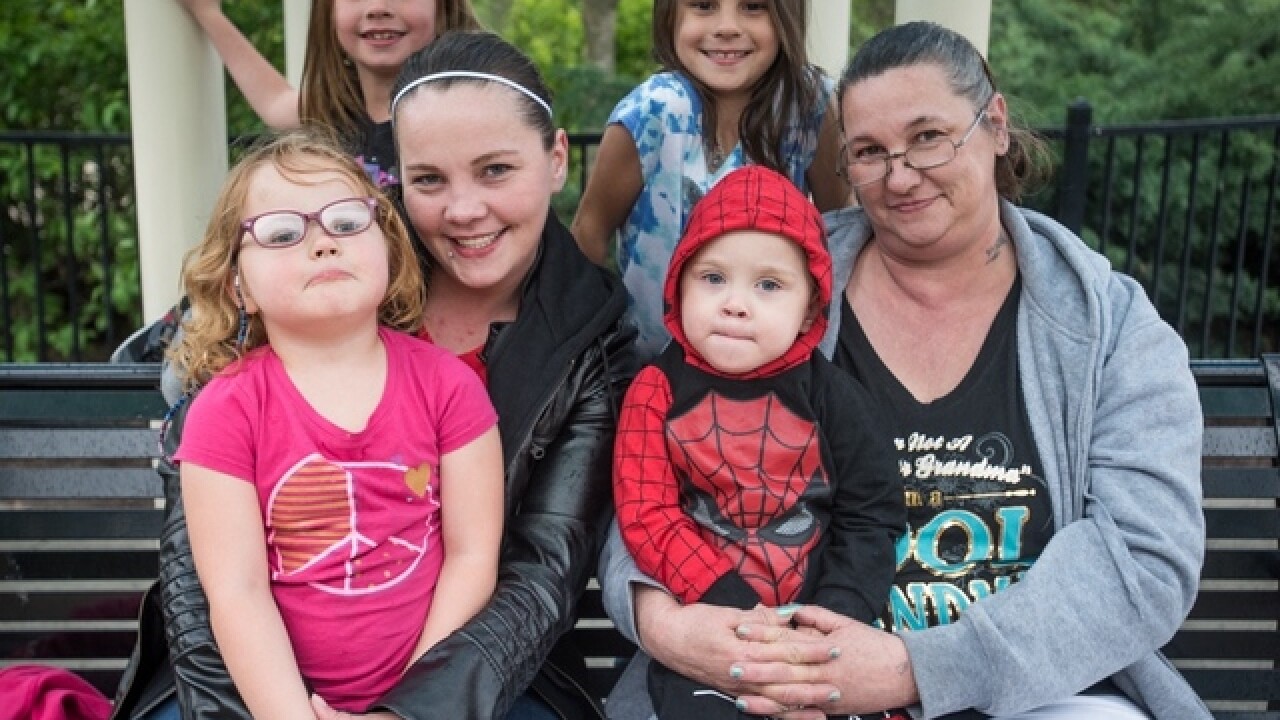 Copyright 2017 Scripps Media, Inc. All rights reserved. This material may not be published, broadcast, rewritten, or redistributed.
Phil Didion
<p>Crystal Cook, seated second from the left, and her family at the Fernbank Park playground on Wednesday May 3, 2017. Her oldest two children were not present. Phil Didion | WCPO Contributor</p>

CINCINNATI -- Crystal Cook has been a mother for more than a dozen years.

But this is the first Mother's Day in three years that she has truly felt like a mom.

That's because for the past three years, Cook's own mother took care of her six, young children while Cook struggled with her addiction to heroin. She's been clean and sober for two years, though, and she regained custody of her children April 1.

As thousands of moms across Greater Cincinnati go to brunch or read greeting cards or rave about the flower arrangements they receive this Mother's Day, Crystal Cook will celebrate something much simpler: Her ability to be a mother to her six children.

We decided to follow up with Cook, to ask about her life as a mom again and find out how she and her children were adjusting to being back together.

"The first couple days was hard," Cook said. "But it's better now. Things are all falling into place."

Since April 1, Cook and her six children have lived in a Sayler Park apartment in the same building as Cook's mom, Candy Carmack. Cook and her kids live on the first floor, and Carmack lives on the third.

Although the kids no longer stay with Carmack, she remains an indispensable part of their lives.

Cook works at a local Panera Bread café, where she found out she was being promoted to assistant manager just before talking with WCPO again. She was still beaming from the news.

"More money for my kids," she said, grinning.

That doesn't mean things are easy.

Cook leaves for work around 5 a.m. every day and typically gets home between 4 or 5 in the afternoon.

"From there, it's cooking, cleaning, bathing. So it's pretty busy," she said.

Carmack gets the kids off to school in the morning. The older kids go to an after-school program, where Cook picks them up after work. Carmack picks up Cook's youngest daughter from preschool and still helps a lot with her son, Ronnie, who is now 3.

Ronnie has had the biggest adjustment with the change, Cook said, because all he had ever known was living with his grandmother.

"But he's actually adjusting a lot better than what we thought he would," Cook said. "He sleeps with me now."

Little Ronnie's birth was the reason Cook decided she needed to change the trajectory of her life. He weighed only one pound and 14 ounces when he was born four and a half months early.

It was about a year after Ronnie's birth that Cook stopped using heroin and starting turning her life around with the help of First Step Home.

Cook credits the nonprofit organization with helping her through her recovery and, ultimately, getting her kids back.

"When I first walked into First Step, I was hopeless. I was soulless, basically," she said. "It took a long time, a long process for me to like myself again. That place restored hope in me. They gave me my life back -- gave me something to look forward to in my life."

For Cook, that something is being a good mother to her kids.

"My children have always been my life. I'm put on this earth to raise my kids. Who they're going to be when they get older is because of what I do," she said. "And I kind of lost sight of that. I had a baby four and a half months early because I couldn't quit using drugs. And it finally clicked. So I finally got some help, and it helped."

Having her kids back was a big change for Cook in more ways than one.

She went from paying $240 per month for an apartment to $600 a month plus gas and electric, not to mention everything for the kids -- shoes, clothes and the occasional trip to McDonald's.

"It's a tight budget right now," she said. But she told her kids it will get better.

Carmack beams as she watches Cook play with her kids at a local park and shower them with kisses and hugs.

"Ain't nobody more proud of this one than I am," Carmack said. "They missed her like crazy."

Cook's daughters Jessica, who is 8, and Lacey, who is 7, said it's good being back with their mom. Lacey's favorite part about living with her again is "that we get to spend more time with her," she said.

"We get to go outside more," Jessica said. She likes to ride her bike, she said.

"And play in the dirt," Lacey added. "We get to go places when it's our birthday. And she likes to love on us."

For Cook, getting her kids back was the only thing her life was missing after she beat her addiction.