They may not get the headlines, but Xavier's 'three-headed monster' does the dirty work 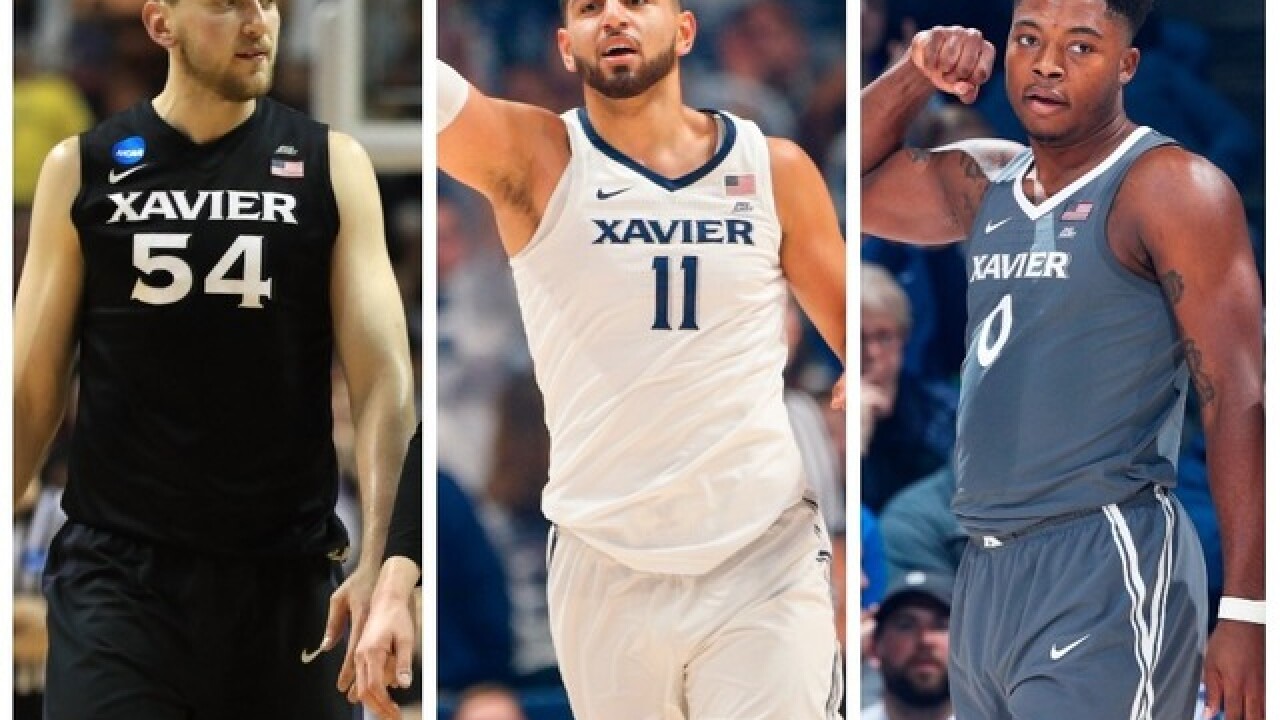 CINCINNATI -- They've been dubbed Xavier’s “three-headed monster," a trio of big men with unique skill sets who each contribute to the Musketeers’ success in their own way.

Coach Chris Mack doesn’t think an outright Big East Conference championship would have been possible without them. A deep run in the NCAA Tournament might depend a lot on them.

“We wouldn’t be where we are today without their sacrifice,” Mack said. “If you ask each one of them, and they were being honest and threw their heart on the table, they would probably say they want to play more.”

There are only 40 minutes to go around, but Mack has managed to divvy up playing time evenly among the three.

Kanter, a transfer from Wisconsin Green-Bay, averages 15.8 minutes through 31 games including 12 starts in his first Xavier season.

Jones, slowed by a shoulder injury earlier in the year, has played in 28 games, averaging 15.2 minutes.

The Musketeers are the No. 1 overall seed in the conference tournament and are projected to be a No. 1 in the upcoming NCAA Tournament.

The contrasts between the Xavier big men are striking, but they function well as a group.

O’Mara is the steady senior, an improved defender, and veteran spokesman. Jones is a rebounder and shot blocker who patrols the rim with energy and attitude. Kanter is soft-spoken, Turkish-born, and a multi-faceted player with a stroke from distance.

Kanter’s ability to play on the perimeter – he’s shooting 32 percent from 3-point range this season – handle the ball and get to the rim allows Mack to keep him on the floor along with Jones or O’Mara.

“In practice we just go at it, and it really helps us,” Jones said. “If we go up against a guy who’s a bruiser, we get that from me. A guy who’s skilled with his back to the basket, we get it from Sean. A guy who can stretch the perimeter, we get it from Kerem. It makes it easy to prepare for other teams.”

After a slow start to his Xavier career, Kanter now has Musketeers’ coaches wondering why Green Bay couldn’t tailor its offense to make the best use of Kanter’s skills.

He has scored in double figures 18 times this season, 12 times in Big East games.

“He’s that mismatch five, a guy that can stretch the floor,” Mack said. “He can make passes. He jumps this high (holding hands close together), but yet nobody can block his shot. He has a way about him. It’s been fun to coach him this year. He’ll always be part of the Xavier family.”

Mack has a history of players raising their level of play come NCAA Tournament time, and perhaps this year it will be Jones.

Jones has scored six or fewer points in nine of the past 11 games. He has scored in double figures nine times this season, but just once since mid-January.

But Jones is a presence around the rim. He’ll step in and take a charge. His rim-rattling dunks often spark Musketeer runs.

He does a lot of things that don’t necessarily show up in the box score.

“A lot of people think producing offensively means scoring points,” Jones said. “I think I can produce offensively by setting a great screen or getting an offensive rebound to get an extra possession for my team.”

“I give him credit, he’s still hitting his free throws,” Mack said. “We depend on Sean and Kerem more for scoring, but we don’t want to be four-on-five on offense either. I suspect his offense will be better.”

Kanter is in his first and only season in a Xavier uniform. Jones is in his second year. But O’Mara has been through the wars, so he often serves as a mentor for the other two.

O’Mara is probably best known for his layup off an assist from Bluiett which provided the go-ahead points in a 73-71 victory over Arizona which sent the Musketeers to the Elite Eight.

This year, O’Mara is averaging 7.2 points and 3.3 rebounds. But he has improved in many other areas of his game.

“Two years ago, if you said we could switch a ball screen against a point guard, I would have said not with Sean, he’d go right around him,” Mack said. “Now he does it as well as anyone in the league, keeping the guy in front of him. I have really enjoyed watching his development.”

In March, the perimeter shots aren’t always going to fall. Teams often have to find ways to win games out of their comfort zone.

The difference could be a big shot or drive from Kanter, a post move or late free throws from O’Mara, or a key block or offensive rebound by Jones.