They didn't make the Zoo Babies deadline, but 19 spitting cobra eggs are on display until they hatch 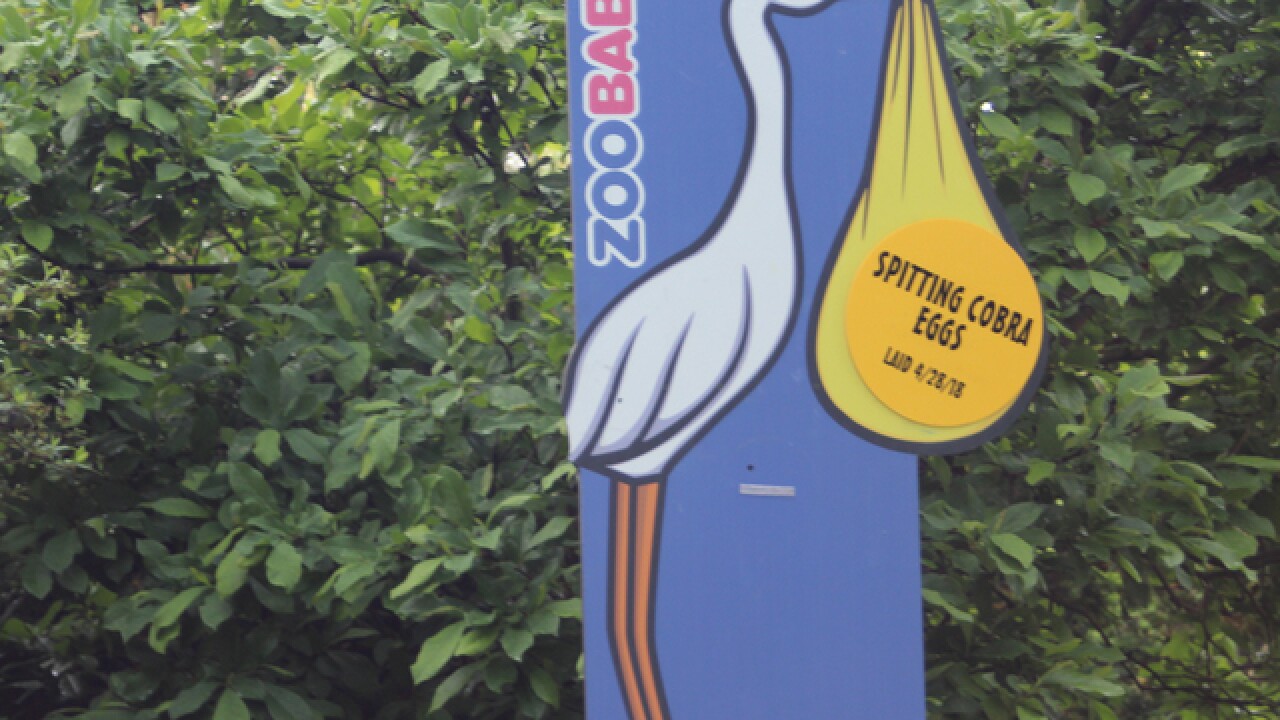 CINCINNATI -- As part of this year's Zoo Babies, the Cincinnati Zoo & Botanical Garden is introducing an unusual group of newcomers.

In April, Indochinese spitting cobra Jackie laid 19 eggs that are now on display at the Reptile House. With a 48-70-day incubation period, the eggs are expected to hatch mid-June. The babies will be the first spitting cobras hatched at the zoo in nearly two decades.

Communications director Michelle Curley said the zoo is excited to include the cobras in this year's exhibit, explaining that it spotlights a species visitors might not know is housed on zoo grounds.

"People usually associate zoo babies as baby hippos and baby rhinos, big mammals, but they don't always necessarily pay attention to some of the unusual species like the reptiles," she said. "It's very unusual to have these eggs, and they're not going to hatch during 'Zoo Babies.' But 19 spitting cobra eggs on display is something that's pretty rare."

When the baby spitting cobras emerge from their eggs, they will be 8 to 12 inches long and filled with tiny poisonous venom glands, said Reptile House team leader Tony Lewis. Although many would cringe at the thought of dealing with the hatchlings, Lewis said he's thrilled. He was there for the birth of red spitting cobras 16 years ago, so he knows what to expect.

"They're like toddlers learning to walk," he said. "When they get spooked they stand up and they spread their little hood, but they're wobbly and they're not sure what they're doing and they'll spit at you just as quickly as the adults will. So right out of the egg they're potentially as dangerous as the adults."

The staff always takes the utmost precautions when interacting with venomous snakes, Lewis said. To prevent exposure from the spitting varieties, he said, the team wears plastic face guards, since the toxin is poisonous only if it comes in contact with a mucus membrane such as eyes, nose or mouth. Ironically, the venom can be ingested without harm, he said, which is how other animals are able to consume the venomous snakes as prey.

"Snake venom in general is safe to ingest. You can drink it as long as you don't have a sore on your gum or cavity or even something in your digestive system -- say an ulcer -- so then you'd absorb it, and that would be bad," he said.

Indochinese spitting cobras carry a potentially deadly neurotoxic venom that can cause extensive damage to the brain and also interrupt signals to the heart and lungs. Lewis said staffers conduct snakebite drills a few times during the year to make sure protocols are being followed. The University of Cincinnati Medical Center keeps antivenom on hand for all of the zoo's poisonous animals, just in case, he said.

Although the team always exercises caution, he said, the venomous snakes within the Reptile House are so comfortable with their care team they rarely exhibit defensive behavior while being handled. He said both the male and female spitting cobras rarely display their hoods anymore, let alone spit.

Although the pair is relatively unaffected by staff and visitors now, he said, that wasn't the case when the cobras first arrived.

"When the female was in quarantine, she was worse than the male," he said. "Her accuracy was terrible -- she'd spit and get me in the neck. It wasn't dangerous, but it just felt weird."

Inaccuracy isn't the norm for the species; Lewis said they can usually pinpoint eyes and nose from 8 to 10 feet away. When babies hatch, they come out spitting, he said, so as they emerge the care team will move them one by one from the incubator to a temporary enclosure. He said it may take a bit longer to desensitize the babies and teach them to trust their care team and zoo visitors. In the case of the last spitting cobra babies, they initially stood and sprayed the glass every time one of the staff passed the enclosure.

"When they spray, they look like little bobbleheads, because the force of the venom comes out and blows their head back and they just look confused when it happens," he said. "'That came from me?'"

Currently, visitors can view the eggs in the incubator on display just above the proud parents at the Reptile House, Curley said, adding that she hopes people will be inspired to come back to see the babies after they hatch.

"They'll be really amazing for people to see," she said. "These guys will be very cute and very unusual-looking, especially when they flare out their little hoods."

So what will the zoo do with 19 Indochinese spitting cobras?

Lewis said they will, of course, keep a few, since the baby spitting cobras are fun to raise and watch grow. As for the others, he said, the species isn't well represented, so they're highly coveted at zoos and aquariums.

"We shouldn't have a problem finding homes for them between (the care team) and all the people we know at zoos all over the country," he said. "We've already got interest in them."