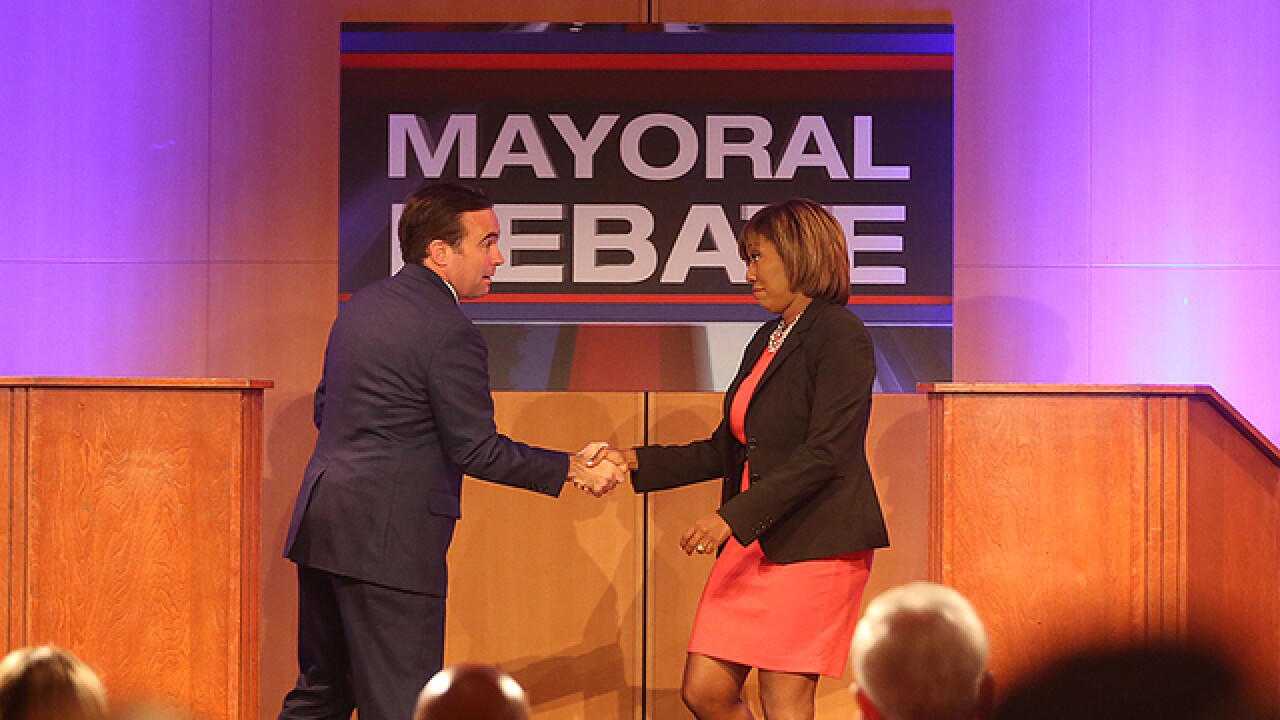 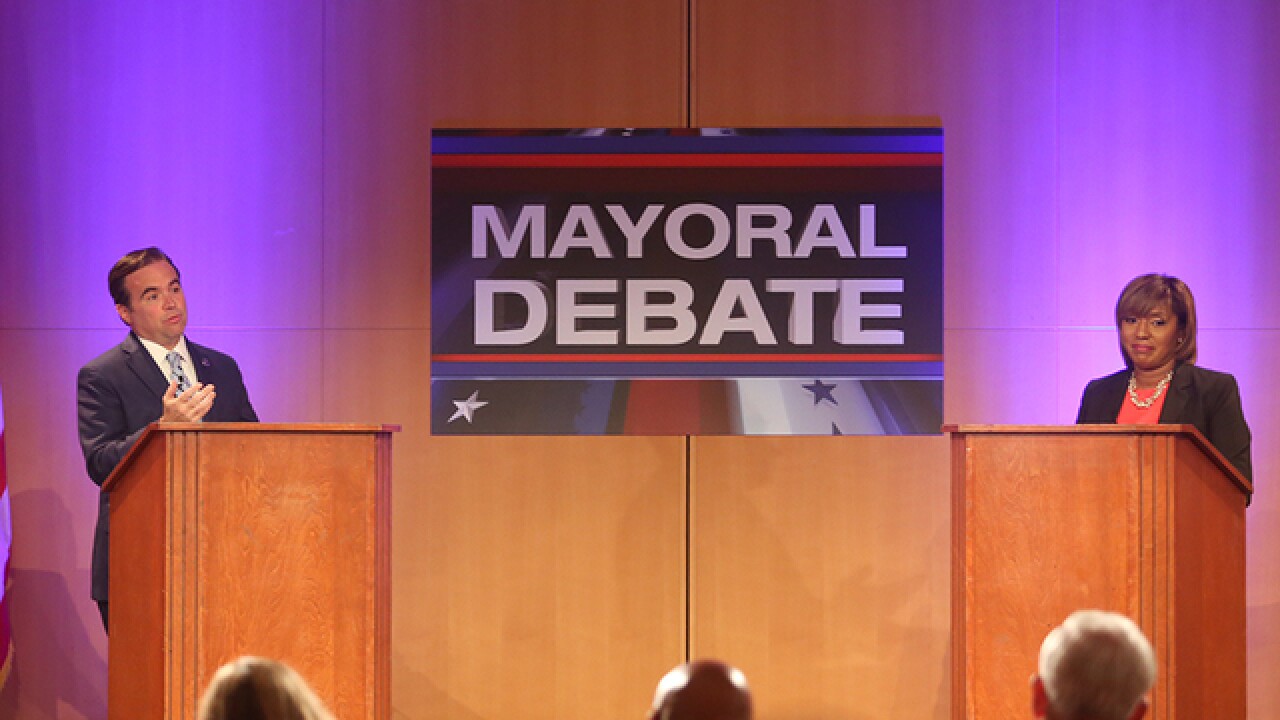 The debate pitted Cranley, the city's current mayor who is running for a second term, against Simpson, a councilwoman who is seeking her first term as mayor. The forum was held at the Cincinnati Art Museum, hosted by WCPO, Radio One and the Cincinnati chapter of the Society of Professional Journalists.

WCPO analyzed some of the best points Cranley and Simpson delivered Tuesday night. Here's what we found.

Simpson: "What I hear people saying when I'm walking down the street is that they're excited about the development, but they're worried it won't include them -- that they will be pushed out of their neighborhoods"

Why it was good: Simpson was addressing a real concern here. In recent weeks, neighbors have grumbled about unintended consequences of the city's tax abatement program, expressing concern for longtime residents who face rising property tax bills when new developers get tax breaks for revitalizing buildings but, ultimately, drive up nearby property values.

Cranley and Simpson gave very different answers to the question, which asked them to explain how the city can recreate OTR's economic boom in neighborhoods across the city.

Cranley essentially responded by saying the city is on the upswing and City Hall is doing enough.

"Neighborhoods are feeling optimistic; things are happening," Cranley said. "Breweries are popping up in every neighborhood and walkability is back."

That's the type of difference between two candidates, both Democrats, that can win or lose them voters.

Simpson outshone Cranley again on this subject later in the debate when asked which three neighborhoods need the city's help the most.

She immediately responded by saying, "I know some need it more." (Winton Hills topped her list.)

"Obviously, all the neighborhoods need help," Cranley said. "We're not going to pick among those."

But anyone who drives from OTR to Winton Hills can see one neighborhood might need the city's attention more than another. And, although it may feel like a new brewery is opening near-daily, voters living without one within walking distance -- they do exist! -- are sure to disagree with Cranley.

So Simpson's answer appeals strongly to voters who feel like they've been left out of the revitalization success (and delicious beer) neighborhoods like Oakley, Walnut Hills and College Hill now enjoy.

Cranley: "In light of what happened with Procter & Gamble today, we need a mayor who understands that you work with people, not against them -- (you do) not blindside them with a proposal at the very last second."

Why it was good: It's been more than two months since Simpson's controversial opposition to a $550 million expansion of Cincinnati Children's Hospital in Avondale.

Cranley risks fatiguing voters when he continues to raise the issue at nearly every turn, but he still manages to keep it in the spotlight, and on Tuesday he smartly tied it to a more timely controversy: P&G's proxy fight.

For weeks, Cranley has taken to TV and Twitter to express his support for P&G President David Taylor and his opposition of Nelson Peltz's campaign to win a seat on the Cincinnati-based company's board.

In this response, Cranley reminded voters of not just one but two recent instances where he sided with the city's major employers. His comments tell voters he'll fight to bring or keep jobs in Cincinnati.

Meanwhile, Simpson still hasn't found a way to outmaneuver Cranley on the issue. She had no comparable, recent example of how she's fought for a major employer or company here. Instead, she was left explaining herself on the Children's vote yet again.

"I'm not going to apologize for recommending something that could have been a great visionary thing to do," Simpson, whose failed request called on the hospital to invest another $14 million in Avondale, said. "I will accept the fact it was rejected."

Simpson: "Who would take four hours, round trip, to get from home to work?"

Why it was good: When the candidates were asked about their use of the Metro Bus system, Simpson was able to detail the hellish commute for a rider trying to get from a Mt. Airy home to work in Walnut Hills. Simpson, who took the ride herself, said she finally arrived across town two bus rides and two hours later.

WCPO has  documented some of the bus system's long commutes  and more than 5 percent of commuters are forced to cope with them.

For anyone who regularly uses the county's troubled bus system, it was an unusually refreshing moment of relatability from a politician during a debate.

Cranley had a nice bit here, too, mentioning that he met with officials from Uber Tuesday to discuss ways the ridesharing company can connect bus riders to bus stops.

Cranley: "We are going to reach for the stars and try to win Amazon.com."

Why it was good: Cincinnati isn't at the top of anyone's list to land Amazon's new headquarters, but Cranley made sure voters know he's lobbying the online retailer to give southwest Ohio a hard look.

He rattled off the work he's been doing to land Amazon -- from rallying leaders in Northern Kentucky and Dayton to submit a bid together to looking at site options -- since the retailer announced it was looking for a new home last month.

This gave Cranley the chance to show off some of the work he does behind the scenes as mayor, and plenty of voters will like knowing that work includes bringing thousands of new jobs to the Queen City.

Simpson, who some would argue might have been more realistic about the city's chances of landing the headquarters, noted Cincinnati lacks the modern-day public transit system Amazon wants for its next home.

"They're looking for the city of the future, the type of city I want to build as your mayor," she said.

Still, voters might prefer to see a mayor cheer on the city in a longshot bid to win thousands of job and the country's most sought-after company headquarters.