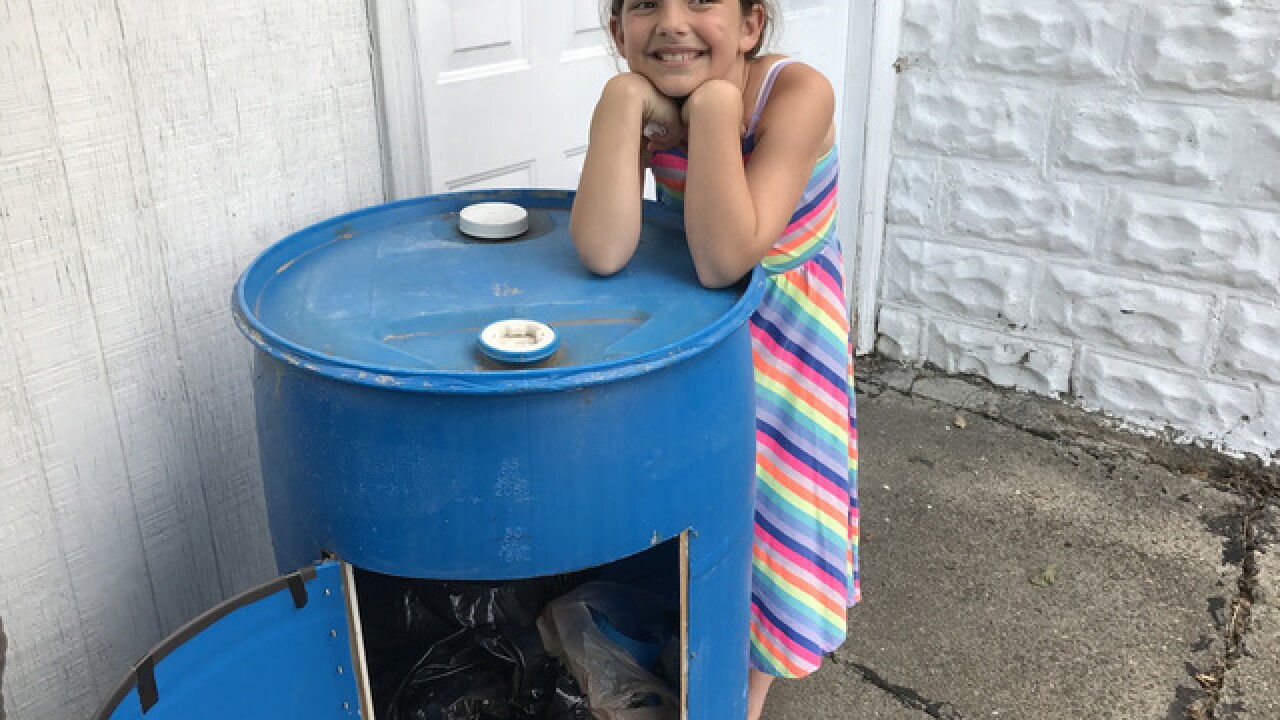 COVINGTON, Ky. -- Kids are getting in the grant-writing business in Covington by asking for "nano grants" from the Center for Great Neighborhoods to help make a little library and to support a philanthropic workshop for kids.

Sophia McLaren, 9, and Hue (pronounced way) Tran and Grace Dicesare, both 14, applied for and received the $250 grants, which can be used to make something better in Covington.

Today, Sophia is halfway done with her little library project, which should be ready to go before school starts.

Hue and Grace will soon hold a workshop for fourth-, fifth- and sixth-graders to help them start their own nonprofits and give back to the community.

"We've had these grants for three years," said Kate Greene, community development program manager at the center for Great Neighborhoods. "(Sophia) was the first kid who filled out an application."

It surprised them, said Greene. "It came in the mail and it was really cute to get -- and inspiring that young people care."

Hue and Grace came next with an idea to take their hard work creating Caring with Cookies into a workshop to share how they did it with other kids. They hope to award $50 starting money to the best idea.

Caring with Cookies, found on Facebook, was the brainchild of the two then-10-year-olds, both of whom arefrom Covington. The pair started baking and selling organic chocolate-chip cookies at local events. They donated half their money to charities that support homeless families.

The two said their schools -- Prince of Peace in Covington and later Covington Latin for Hue and Amelia schools for Grace -- encouraged kids to help others.

They had applied for and received a previous grant from BakeMeHome in Cincinnati.

"I started to realize how much we affected people's live and got to know them," said Hue. It made both teens want to do more.

Sophia got her idea from watching an episode of "Sesame Street" that talked about ways to help your community.

"What I'm thinking is adult books (on the top shelf) and children's books on the lower shelf because adults can bend down, but children can't grow faster," said Sophia.

Neither grant happened without having an involved parent. In this case, Sophia's and Hue's moms are involved in Covington projects. Sophia's dad is helping with construction.

Sophia's mom knew someone at the Center though Urban Charities, and Hue's mom had applied for previous grants.

Elizabeth McLaren is on the board for the Northern Kentucky Urban Charities groupm and another board member works for the Center.

Janet Toebler, Hue's mom, heads up the garden and chicken project in Orchard Park and was involved in the West Side Spring Celebration and the running of the goats in Covington.

"When they were 10, they were really cute," she said. "(Cookies were) a good little project."

Sophia's library will eventually have purple lettering that labels it "Sophia's Little Library," and rainbow colors.

Tom McLaren, her dad, said it will also have a roof, more waterproofing, and a stand that lifts it off the ground. While he's helping, Sophia is doing the research, and she also cut out two wooden shelves to fit in the circle-shaped drum.

"It will look like a drum, but not a drum," he said. "I think this is awesome. She took the initiative by herself. Her mom came home one day (from her board meeting) and said Sophia got a grant."

"I tell everyone," said Elizabeth McLaren.

The Center for Great Neighborhoods does a lot of work with kids ranging from partnering with schools to helping them adopt community projects, said Greene. Applying for grants seems like the next step.

"Hue came and sold cookies at the opening of this building," said Greene.

The Center for Great Neighborhoods recently moved into a refurbished lumberyard.

Nano grants are awarded to provide creative works or studies in Covington and bring people together, she said.

"You're building leadership in the community (with the grants)," she said.

The goal is to fund as many as possible.

The Center has awarded about 70 grants from the nano grant program in three years. Those three years have been funded by the Kresge Foundation, a national organization. Greene said they've reapplied for funding, but also have interest from local organizations in funding the grants.

When Sophia learned she had won the grant, she requested a meeting and didn't stop asking questions.

Greene said Sophia asked questions ranging from who could help her to how she might bring people together to celebrate when it's done.

Sophia said there's going to be a big party when her little library is done.

"We're going to ask the TV people and everyone," she said.

And, well, celebrating makes it real.

Want to attend the philanthropic workshop for kids?

The workshop is open to kids in fourth, fifth or sixth grades from any community. Hue Tran and Grace Dicesare will share ways other kids can start a nonprofit.

Reserve a spot: Email hueandgracecwc@gmail.com for more information and to reserve a spot.