These Cincinnati Bearcats never give up on themselves, even down 21-0 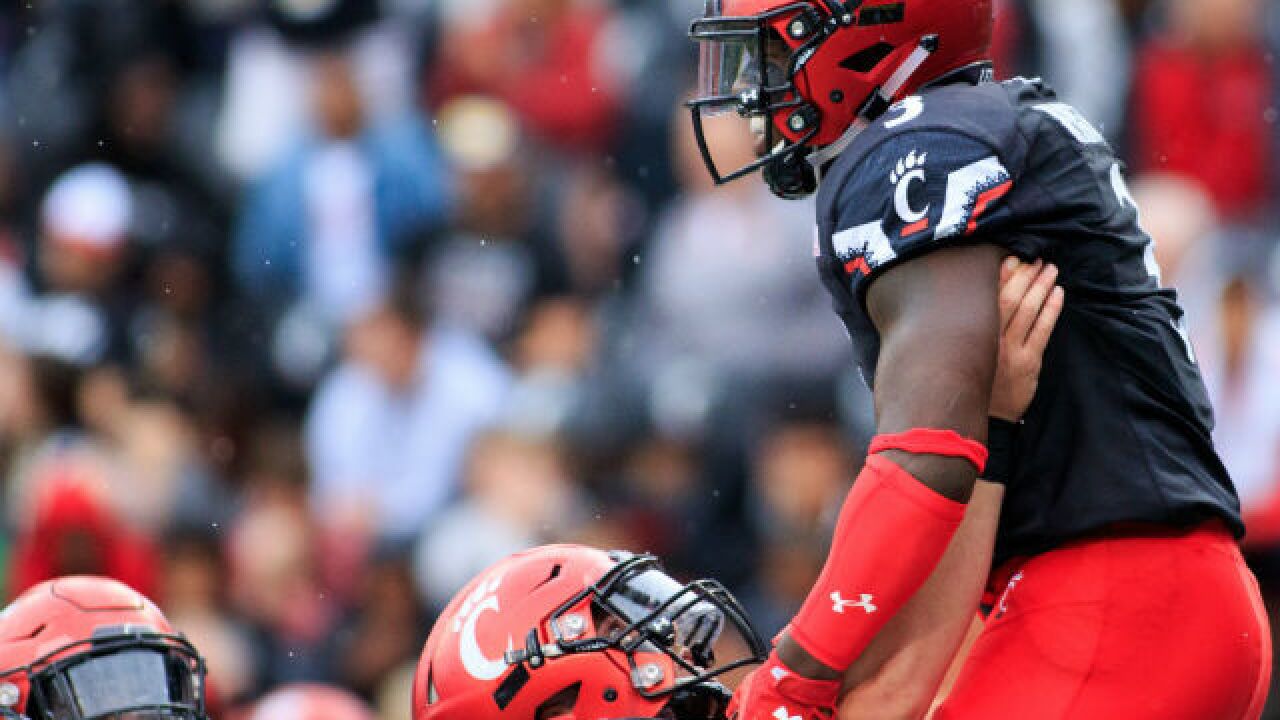 Image copyright 2018 Getty Images. All rights reserved. This material may not be published, broadcast, rewritten, or redistributed.
<p>CINCINNATI, OH - SEPTEMBER 22: Michael Warren II #3 of the Cincinnati Bearcats runs the ball against the Ohio Bobcats at Nippert Stadium on September 22, 2018 in Cincinnati, Ohio. (Photo by Justin Casterline/Getty Images)</p>

When the Bearcats fell behind last year -- aside from a stirring fourth-quarter comeback win over Miami at Yager Stadium – body language changed on the sideline, positivity exited the locker room, and the game at that point was lost.

On Saturday afternoon in soggy Nippert Stadium, the Bearcats trailed Ohio University 21-0 before many of the 35,220 fans had found their seats. Game over, right?

Only this isn’t last year. Despite being one of the five youngest teams in all of college football, the Bearcats on Saturday rallied to a 34-30 victory by displaying all the qualities of a team that is tough to finish off. Fickell cited their growth and maturity as compared to last season, trust and respect of each other, leadership and accountability from player to player.

"Wow, that was a barn burner... the resiliency of this team and their ability to fight through, that's what I am most proud of"

The Bearcats trailed 21-0 early in the second quarter, 24-7 late in the first half, and 30-21 early in the fourth. They committed 14 penalties for 150 yards, but managed to take the lead with 3:31 left. Even then, the Bearcats needed to stop the Bobcats at the goal line in the closing minute to preserve the victory.

“Where we were last year, we wouldn’t have had a chance to continue to battle, keep our composure and give ourselves a chance to win,” Fickell said.

Coming off back-to-back 4-8 seasons, the Bearcats (4-0) are off to their best start since 2012 when they started 5-0 under coach Butch Jones. The 2008 Orange Bowl team coached by Brian Kelly was honored on Saturday. The game had that magical feel, much like many during Kelly’s time here.

“I could see the fight in everyone’s eyes at halftime,” said sophomore running back Michael Warren. “Last year, I didn’t see that. It was like we didn’t want to come back.”

Saturday’s game was Ohio’s first visit to Nippert Stadium since Nov. 10, 1979. The two schools had met 51 times but hadn’t faced each other since 1981. The all-time series is now 25-23-4 in favor of UC, but in the first half it certainly didn’t look like a Bearcats win was in the cards.

Bearcats quarterback Desmond Ridder, who made his third start since replacing senior Hayden Moore and helping lead the Bearcats to a season-opening win at UCLA, was nearly picked off twice in the first half. He was intercepted once. But Ridder recovered from a slow start to finish 19-of-29 for 274 yards and two TDs.

So, did the redshirt freshman's demeanor or mindset change at halftime?

“It definitely changes, but it changes in a positive way,” Ridder said. “We had to get things going, get the tempo going. No disrespect to any other team, but I go out there thinking I’m the best player and nobody can stop me. I try to pass that along to others.”

Warren was well-rested after having only six carries for 78 yards and a touchdown in last week’s 63-7 rout of Alabama A&M. His 24-yard TD run got UC on the board with 5:44 left in the first half. He finished with 124 yards on 23 carries and two TDs.

A mistake-ridden drive for the Bearcats defense led to an Ohio touchdown in the first quarter. Bearcats defensive end Kimoni Fitz knocked down the Bobcats’ punter and replay confirmed the ball was not tipped, resulting in a penalty. An unnecessary roughness penalty on Bearcats linebacker Bryan Wright tacked on another 15 yards, and Ohio capitalized with a 9-yard TD run by A.J. Ouellette to go ahead 7-0.

You don’t often see third-and-15 converted on a designed quarterback keeper, but Ohio’s Nathan Rourke did just that in the first quarter when he gained 18 yards. That led to another Bobcats touchdown, and the score was 14-0.

“To see a quarterback make as many plays as he did in the first half, you do get frustrated, as a coach and the players,” Fickell said.

Everything went right for the Bobcats in the first half. Even a busted play worked out for Ohio when Rourke went to hand the ball off but nobody was there, so he ran for a 3-yard touchdown. It was that kind of first half for the Bearcats.

“It wasn’t perfect by any means,” Fickell said. “But the resiliency of those guys to keep their chins up and be in a hole, not just a hole, but the way it happened, giving up big plays - whether it be broken plays or penalties.”

While the fans were less than pleased with the officiating, many of the flags were of UC’s own doing. Moments after being given a sideline warning, an unidentified Bearcats assistant was flagged for an unsportsmanlike conduct penalty. A roughing the passer penalty on UC was barely a shove, but it came well after the ball was thrown. The Bearcats trailed by 17 points at halftime, but much like they did in the Rose Bowl against UCLA, they showed some moxie.

“You would think it would be a little negative, but it actually wasn’t,” Ridder said of the Bearcats’ locker-room mood at halftime. “Everyone was positive and keeping their heads up. I think that comes from (having) great leaders. I tried to get everybody going before we went back out, and told them we had to have a better second half than we did the first.”

On the third play of the second half, Ridder tossed a 77-yard touchdown pass to Rashad Medaris to cut Ohio’s lead to 24-14. Although the Bearcats still trailed by 10 points, it was at that moment that the atmosphere in Nippert began to shift.

“They started off showing a zone and they broke into man,” Ridder said. “We knew their linebackers couldn’t run with our slot receivers all night, so we had Rashad on a vertical route. He made a play and 77 yards later, we’re getting some momentum.”

After Ohio twice had to settle for field goals after having first-and-goal, another major momentum swing in the Bearcats’ favor came when safety Darrick Forrest recovered a fumble at the Bobcats’ 28. Ridder ran 7 yards for a touchdown to make the score 27-21 with 3:31 remaining in the third quarter.

The Bobcats extended their lead to 30-21 with a 47-yard field goal by Louie Zervos, but the Bearcats responded again. Ridder’s 26-yard touchdown pass to Jayshon Jackson made the score 30-28 with 12:37 left. And Warren’s 3-yard plunge with 3:24 left gave the Bearcats their first lead of the day, 34-30.

“It’s not about getting the big plays,” said Ridder. “It’s also the little plays to get the momentum going.”

After a tackle for loss by linebacker Jarell White, it was third down from the 4 when Bearcats linebacker James Wiggins intercepted a pass at the 2. UC converted a first down to seal the win.

“We talked last year about fighting and fighting and fighting,” Fickell said. “But it’s over time that you build those relationships and that communication on the sideline. It’s a combination of the trust that’s built between the coaching staff and the players. This is a great growth moment. We have to continue to grow.”

UC visits 1-3 Connecticut next Saturday in the American Athletic Conference opener for the Bearcats.