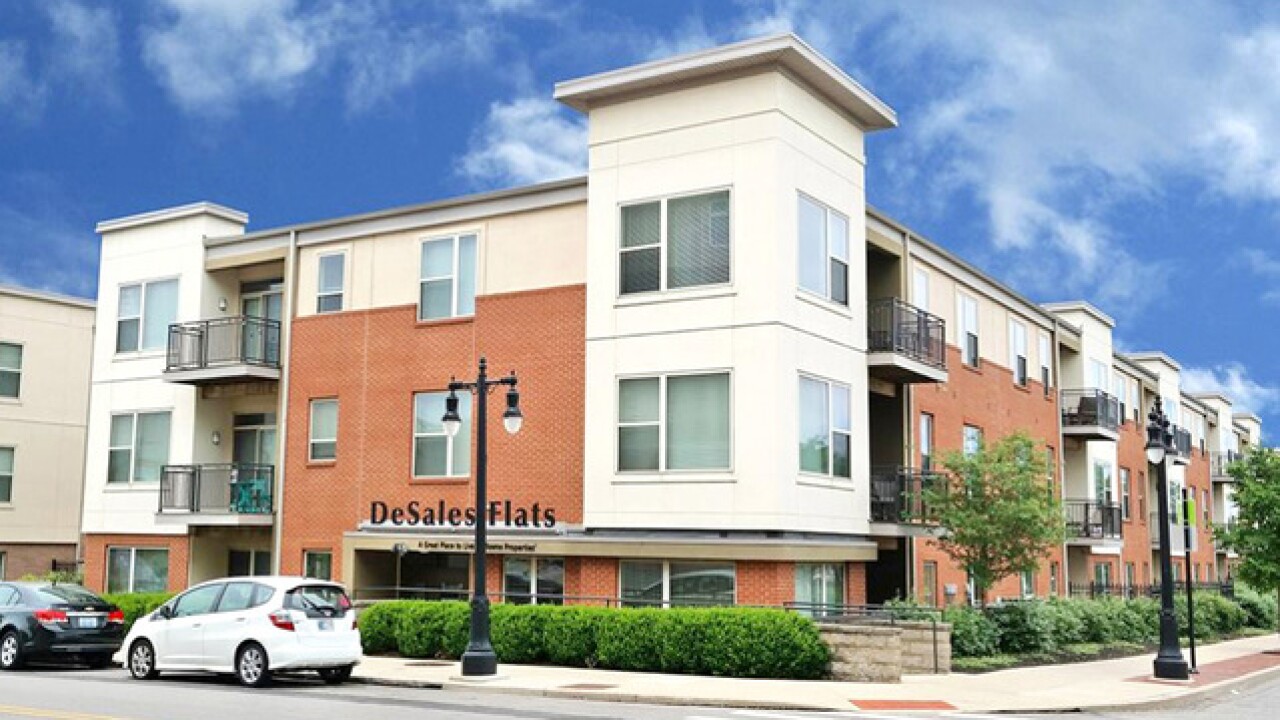 Copyright 2017 Scripps Media, Inc. All rights reserved. This material may not be published, broadcast, rewritten, or redistributed.
DeSales Flats
<p>DeSales Flats is on Chapel Street in East Walnut Hills. The neighborhood showed a big increase in average rent over two years from the start of 2015 through 2016. (Provided photo)</p>

Changing attitudes and shifting demographics -- as well as communities with foresight to recognize those very things -- could be behind a significant uptick in apartment rental rates in the Tri-State, according to local experts.

WCPO asked Rent Jungle to compile a list of the 9 Tri-State areas where rents are increasing the most in a snapshot period from the beginning of 2015 to the end of 2016. Click on the interactive map below for details on the communities.

"The surprising change has been the baby boomers, the empty nesters who are much more willing to rent compared to, say, 20 years ago," Lockard said. "Maybe they've owned a house for 25 years, they've reached a point where they want ease and flexibility. They want to be able to lock and leave. They want to travel. They want to lock the door and come back in a month and unlock the door."

Also notable: The most expensive average rent at the end of the sample period belongs to perennially growing Mason, at $1,483; the least expensive is in East Price Hill, less than half of Mason's at $713. Renters apparently have an affinity for anything with "East" in the equation -- East End, East Price Hill and East Walnut Hills all made the list.

Lockard said the national rental rate is up more in the 3 percent to 3.5 percent range in the target period. "Those are relatively small markets," he said of the Top 9. "One or two properties making a move can distort the numbers dramatically. If one property is built new or something along those lines, it can change all the data dramatically."

"The Cincinnati-area rent grew at a slightly higher rate than the national rent growth rate, meaning there could be more high-end units entering the Cincinnati market at a faster rate than they are entering in other markets," said Rent Jungle data scientist Michael Mele. "Or there could be an increase in property values due to population growth or some other outside force."

"If you start looking at the business districts at some of the urban locations, Northside has a very thriving business district. They've had new projects coming there in the last few years," Lockard said, citing American Can Lofts and Gantry. He believes the latter is the first new housing construction in Northside in 30 years. "Those are pretty upscale projects.

"Along the same lines, East Walnut Hills -- you have DeSales Plaza, DeSales Flats, the whole Woodburn corridor, which has undergone a fairly dramatic renaissance. The housing ties into the business districts. When you have high-quality amenities in the business districts -- shops, restaurants, coffee shops, entertainment, services -- when you have all those, that helps make it desirable to live."

Lockard sees the climb in appeal and value for rental properties; the old saws about location and supply and demand rule here as they have for generations. Other conventional wisdom, however, is taking a hit with a new generation. Seeing homeownership as an investment would be one.

"It is quite possible that millennials see their early adulthoods as more of a transient period than was true in prior generations," said Jeffrey Timberlake, a University of Cincinnati associate professor of sociology who specializes in population and urban sociology.

"Certainly from World War II to the early 1970s, the most common family formation pattern was to get married and have children early in your 20s. This lent itself to putting down roots and buying a home," he said. "But as marriage rates have declined, and the age at marriage and childbirth have increased, there is less of a reason to tie yourself to a mortgage and more incentive to stay flexible, especially because employment is more unstable these days. Given that young people change jobs, companies and locations more frequently, it doesn't make as much sense to lock yourself into a mortgage."

Timberlake also points to a more recent, darker phenomenon as a driver: the mortgage crisis of 10 years ago and its ripple effect. It may be both preventing homeownership and scaring off prospective buyers still, he said.

"The struggles of the middle class and rising income inequality may mean, again, that some families who in another era would have been homeowners are turning to the rental market to keep a roof over their heads," he said.

The Top 9 Tri-State communities for increasing monthly rents from the beginning of 2015 to the end of 2016. Units listed figures are averages.