Here ae some of our favorite frozen-drink locales 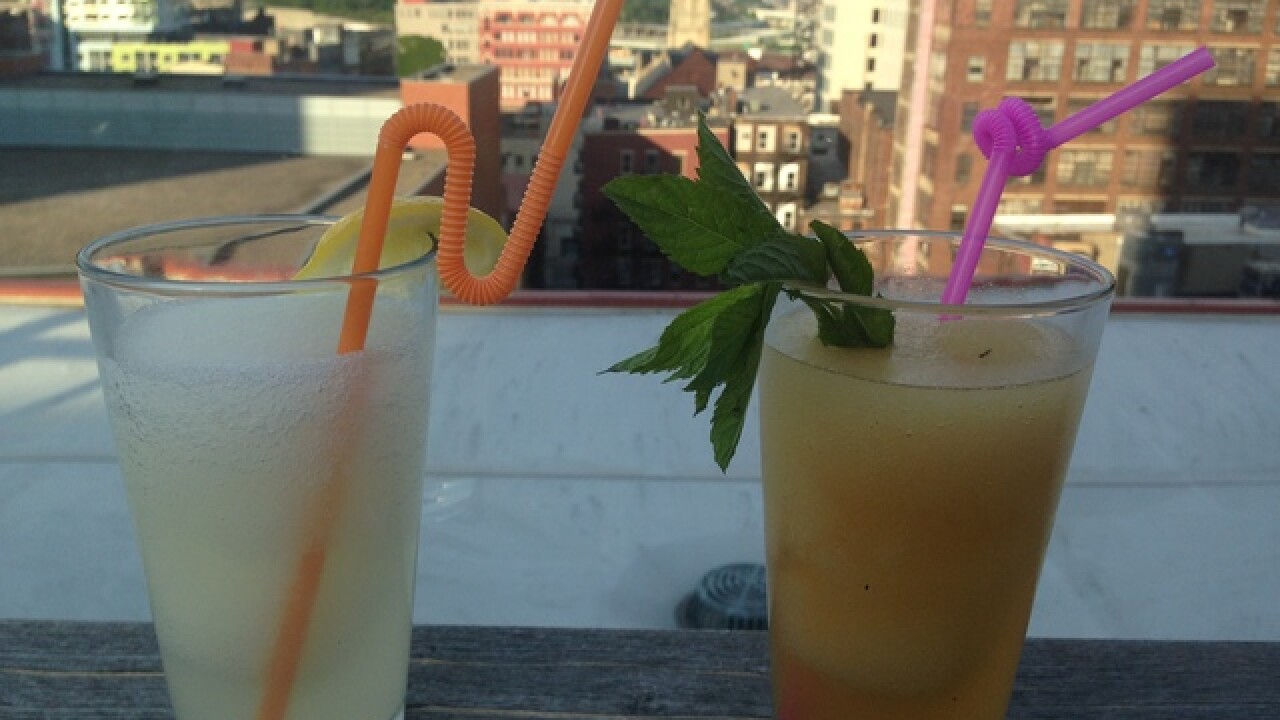 Slushies are the adult versions of a Snoopy Sno Cone and a Slush Puppie, except more fun to drink. Over-the-Rhine offers three places, making it easy to turn "slushing" into a bar crawl. One caveat, though: Watch out for brain freeze!

Here are some of the best places to enjoy alcoholic slushies -- preferably while sitting outside -- this summer.

Hotel Covington's courtyard: During Fridays and Saturdays throughout the warmer months, the courtyard sets up a small bar and offers frozen drinks ($8) from a machine. The drinks are available only outdoors, but you can purchase the slushies outside and take them indoors. The High Plains Grifter contains Old Forester bourbon, Rhinegeist Cougar beer, lemon, demerara sugar and orange bitters slushed up. 638 Madison Ave., Covington

Pontiac BBQ: Fun fact: In 1970 Cincinnatian Will Radcliff invented the Slush Puppie machine, and the Queen City hasn't been the same since. Pontiac ups the slushie game with its two-flavored machine. 99 Luftballons (Red Balloons) -- yes, named after that awesome '80s song -- tumbles in the machine with bourbon, lemon juice, bitters and cherry Slush Puppie ($7). Pontiac's housemade ginger-peach slushie doesn't contain alcohol but is added to the Love in the Elevator (another song reference) drink: bourbon, maple, mint and ice cubes stirred together with the ginger-peach slush doused on top ($12). While you're here, indulge in the brisket and Tiki cocktails, such as Tiny Dancer, made with rum, gin, lime juice, fassionola syrup (a tropical New Orleans syrup used in Hurricanes) and sunflower orgeat (a nutty syrup). 1403 Vine St., Over-the-Rhine

16-Bit Bar + Arcade: A few blocks from Pontiac in Over-the-Rhine, 16-Bit also uses Slush Puppies as a base for its cocktails. First, choose your slush flavor -- cherry, blue-raspberry or lemon-lime -- and add a mixer. For cherry, the options are cherry vodka, whipped vodka or fireball; blue-raspberry gets berry vodka, peach vodka or gin; and lemon-lime has rum, rainbow sherbet vodka or orange vodka. Note: You get only one shot of booze per selection. The lemon-lime and rum combo radiates a nuclear-green shade and has a thin consistency. Pair the drinks with a game of BurgerTime or one of the '80s-themed cocktails, such as the Carrie Fisher: rum, blueberry vodka, pineapple juice, lime juice, blue curacao and purple Rock Candy. It really is like being a kid again. 1331 Walnut St., Over-the-Rhine

Queen City Radio: This open-air haunt opened in September and immediately started selling two kinds of slushies. It uses dual machines to create varieties, like the Hawaiian Haze ($7), made with ginger beer, pineapple and lime juices and ginger mint-flavored Karate Cowboy, a sake liqueur sourced from a Columbus distillery. The slush is as thick as shaved ice. The other slush offering is L.F.D: el Jimador tequila, strawberry, kiwi, lime, lemon juice and orange liqueur ($8). If the slushies don't fill you up, order a falafel sandwich or burger from on-site food truck Queen City Whip. 222 W. 12th St., Over-the-Rhine

The Cocktail Terrace at the 21c Museum Hotel: Follow the smell of smoke to 21c Museum Hotel's alleyway, where you'll find an entrance to the 11th-floor rooftop bar. Once there, try one of the two slushies: The Gidget (Stoli vodka, lemon, orange blossom) and Tropic Thunder (Old Forester bourbon, charred pineapple bits). (Priced at $12 and $13, respectively, they're the most expensive slushies I came across. Hotel prices, y'all.) The drinks are served in a pint glass and come with a fun, squiggly straw to suck out the slush. You almost need a spoon to eat the pile of ice at the end. Both drinks are sweet, highly drinkable and have a tendency to sneak up on you, alcohol-wise. The slushies aren't available downstairs at Metropole, so be sure to pick a nice day to soak in that view of Cincy -- and quaff some slushies. 609 Walnut St., Downtown

Second Place: In November, The Littlefield owners opened the adjacent sports-themed bar Second Place in Northside. Since opening, it has served two kinds of slushies: a constant bourbon slush (black tea, housemade ginger beer, lemon and orange juices) and a rotating slush. Currently, Second Place is pouring an Arnold Palmer -- a strong vodka taste jumbled with lemonade and iced tea. During the winter, it had a coffee slush that was so cold the straw stuck to my lip "Christmas Story"-style. Second Place's slushies aren't too strong but also aren't too weak, and priced at $6 each, you're getting a bargain. Cool off with the icy libations -- and free popcorn -- on the ample dog-friendly patio, which conjoins Littlefield's upstairs deck. 3936 Spring Grove Ave., Northside

Mac's Pizza Pub Covington: Head over to Covington's MainStrasse Village to slurp slushies at a pizza joint. The slushie machine at Mac's contains non-alcoholic strawberry daiquiri and margarita mixes. (The drinks aren't listed on the menu, but you'll see the machine at the bar.) Just add well rum to the daiquiri or tequila to the margarita and you're in business. The drinks are runny like fruit juices but also foamy. The best time to slush is during happy hour, since all drinks are $1 off, which means slushies are only $5. 604 Main St., Covington