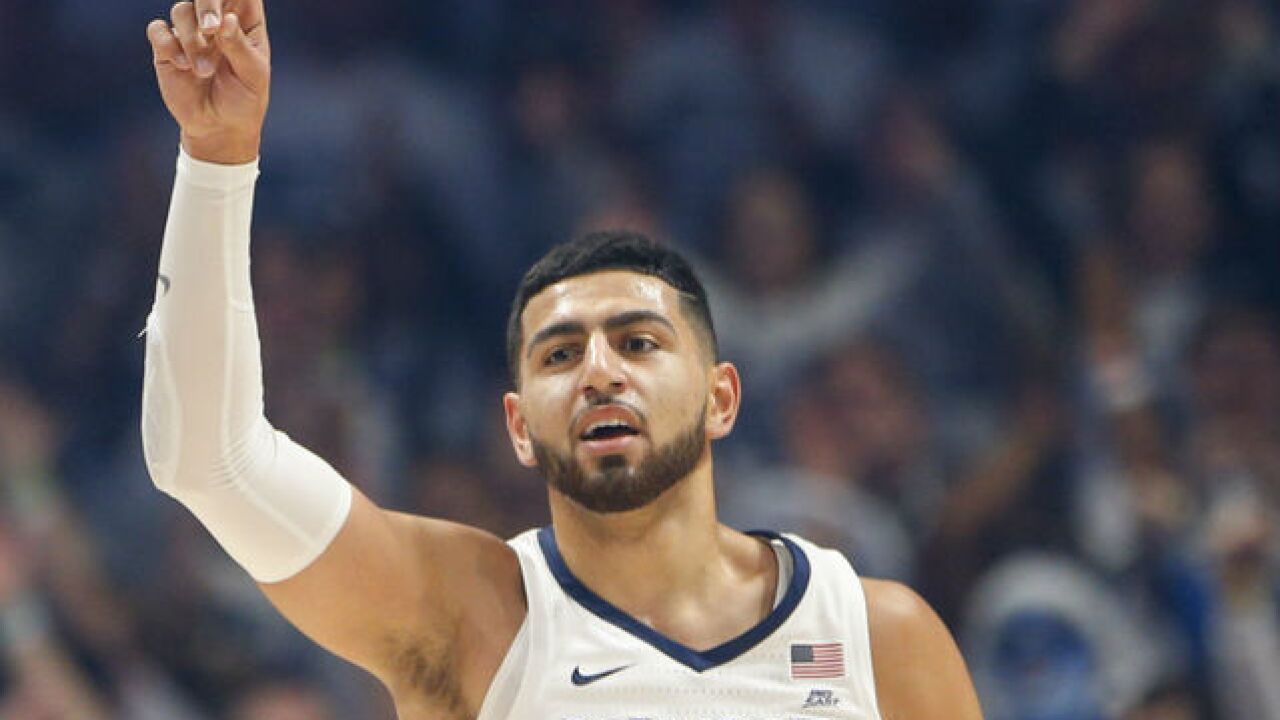 Image copyright 2017 Getty Images. All rights reserved. This material may not be published, broadcast, rewritten, or redistributed.
Michael Hickey | Getty Images
<p>Kerem Kanter #11 of the Xavier Musketeers celebrates during the game against the Cincinnati Bearcats at Cintas Center on December 2, 2017 in Cincinnati, Ohio. (Michael Hickey/Getty Images)</p>

College basketball season may still be in its fledgling stages, but Xavier has emerged with an 8-1 record and a handful of critical resume-building victories. In fact, the No. 13 Musketeers’ wins over then-No. 16 Baylor and No. 11 Cincinnati were the first consecutive Top 25 non-conference triumphs for XU under coach Chris Mack.

So if the season’s ultimate reward is an NCAA tournament bid, is Xavier well ahead of the curve in its quest for a 28th appearance in the Big Dance?

“I’d say Xavier’s about where one would expect them to be, although that’s a good spot because they were expected to be very good,” Sporting News columnist Mike DeCourcy said.

The Musketeers long have sprinkled quality non-conference opponents into their schedule. A philosophy that started as a necessity in the Atlantic 10 Conference -- to offset some of the weaker opponents and protect Xavier’s NCAA tournament aspirations -- has now evolved into a habit.

What Xavier can control is its nine unfilled slots in the non-conference schedule. Some are quickly occupied by longstanding commitments, like the Skyline Chili Crosstown Shootout with UC and the Skip Prosser Classic with Wake Forest, but room remains for home-and-home series and guarantee games.

Home-and-homes like Saturday’s rematch against Colorado are scheduled a couple years ahead of time. Guarantee games, or ‘buy games’ that do not require Xavier to return to the opponent’s court, typically fill four to six slots and are determined about a year out.

Potential foes are evaluated in part by conference affiliation and body of work. But scheduling a team and knowing exactly how its RPI or strength of schedule will affect the Musketeers when they finally meet are two different things.

“There is always a degree of uncertainty when trying to project where an opponent will fall in future years,” said Mario Mercurio, Xavier director of basketball administration. “Looking back at a three- to five-year sample size of metrics like KenPom and RPI can give you a bit of a clarity when trying to navigate which programs are a safer bet to partner with down the line.”

Xavier tries to schedule as robustly as possible in an effort to challenge itself and enhance its resume. The Musketeers have not scheduled a non-conference opponent above 300 in the RPI since the 2008-09 season when they played Toledo.

That nine-year streak leads the nation. The second-longest run in avoiding 300-plus RPI non-conference opponents is just three seasons and shared by Kentucky, Louisville, Georgia, Vanderbilt, North Carolina and Oregon.

DeCourcy said Xavier improves its value and in turn the currency of a Big East victory by scheduling quality competition.

“What is a Big East win worth? Well, that’s established in November and December. The league needs Xavier in its current circumstance to do great work to establish that level at a high level. They don’t need DePaul because DePaul can’t do it. They need Villanova and Xavier and Butler, teams that have been really good over a long period of time,” DeCourcy said.

“Now if ever there were a circumstance where Xavier slipped because of rebuilding or whatever, then you might need to play a lighter schedule to get yourself to a point where you understand how to win and all. But Xavier at this level with multiple seniors and real talent and a great coach -- the Big East needs Xavier playing and beating good people, and they’re doing that.”

The NCAA selection committee recently changed the complexion of college hoops scheduling by creating new "team sheets," or ways of determining the value of wins for NCAA tournament consideration. In past years, teams subscribed to dividing categories that valued wins over opponents in the RPI’s Top 50, Top 100, Top 200 and Top 201 and above.

“The committee’s shift to the quadrant-based system will play a role in every scheduling decision we make moving forward,” Mercurio said. “As the committee’s emphasis on road and neutral-site games grows, we have to be really intentional when it comes to options away from the Cintas Center. At the same time we have to be ultra-protective of the quality of team we play at home, as the range for what is considered a quality home win has tightened even more.”

The Musketeers can’t change their conference games, which will fall across all four quadrants, but they can avoid non-conference outings of limited value or those that could tinge their postseason resume.

Although this year’s schedule was set by the time the new team sheets emerged, Xavier already has positioned itself well based on its mix of opponents coming off 2017 postseason appearances in the NCAA tournament, National Invitation Tournament and College Basketball Invitational.

The Musketeers have four remaining non-conference games this season: Colorado, East Tennessee State and Marshall at home, and a road game at Northern Iowa. Then it’s on to the 18-game Big East slate, which features home-and-homes with each league mate.

XU’s only misstep thus far came against Arizona State in the Continental Tire Las Vegas Invitational championship, but that 102-86 loss wasn’t a black eye on the Musketeers’ resume, DeCourcy said.

“I don’t know that many people would have expected that they would lose to Arizona State but ASU is probably going to be borderline (NCAA) tournament if not a little bit better than that, so it’s not necessarily a bad loss,” DeCourcy said.

Xavier as of today ranks No. 20 in the RPI via Real Time RPI. Its Top 25 victories, road win at Wisconsin and neutral-court victory over George Washington remain valuable assets as it forges through the month of December.

As long as the Musketeers continue stockpiling wins and avoiding bad losses, they’ll be primed for another bid and preferred seed come March.