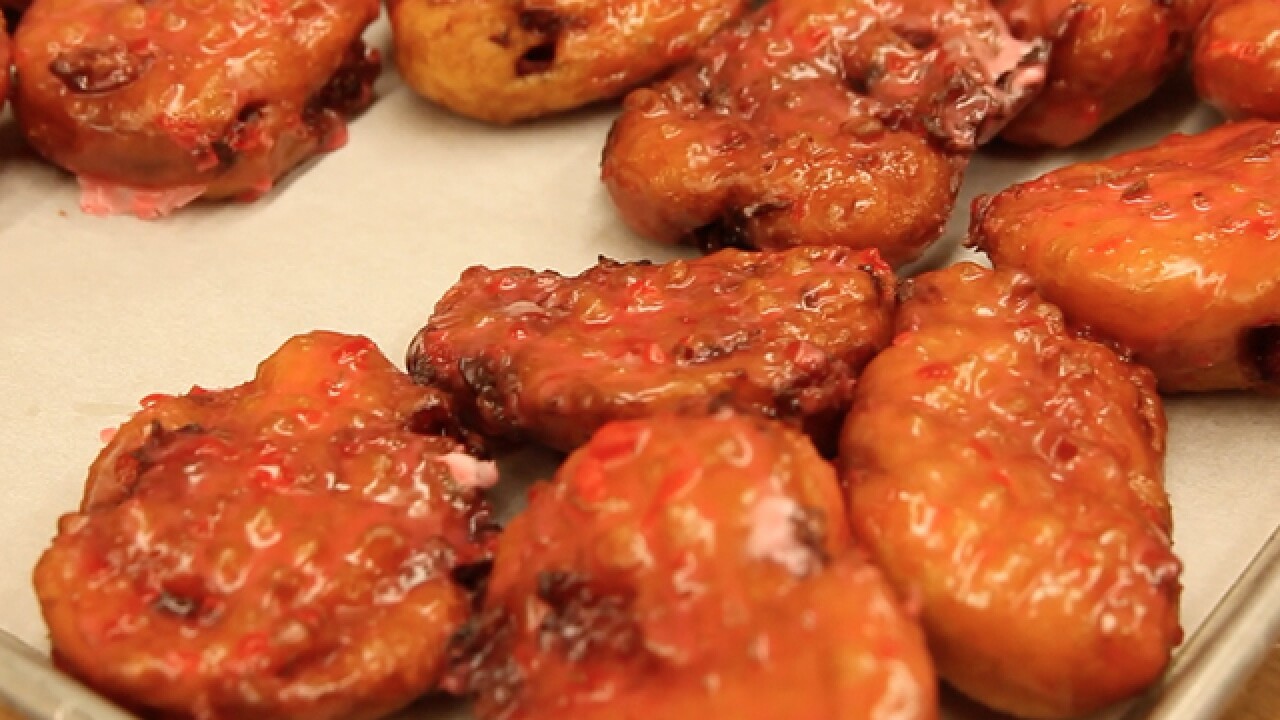 Copyright 2017 Scripps Media, Inc. All rights reserved. This material may not be published, broadcast, rewritten, or redistributed.
Maxim Alter
<p>Thing-A-Ling's fresh off out of the fryer.</p> BATESVILLE, Ind. – Giant paper cut-out cherries line the streets of Batesville, Indiana each February signifying the arrival of one thing:

Part doughnut and part fritter, this fried morsel stuffed with cherries and soaked in a pink glaze is only sold a few days a year. The limited sale has sent thousands of people – and dollars – into the small city about an hour west of Cincinnati for decades.

And it’s all thanks to an idea Clem Schmidt had 42 years ago.

Schmidt, 77, has owned Schmidt Bakery since 1963 but started making his now famous cherry pastry in 1976. He said he saw the words “Thing-A-Ling” on a bag of flour all those decades ago that inspired him to make his own cherry fritter.

The name stuck – and so did the city’s love for his sweet concoction.

Schmidt said that number grows by about 7,000 doughnuts each year, and he expects this year to be no exception.

And before you ask him, yes, he thinks President Donald Trump would enjoy a Thing-A-Ling.

“I don’t meet many people that don’t like the taste,” he said. “Even if you don’t like cherries, you’ll love the Thing-A-Ling.”

Making the Thing-A-Ling is a family affair for Schmidt. His wife and daughters all have a part to play in the process of cooking up thousands of doughnuts.

In that single Thing-A-ling weekend, there will be more than 25 people working behind the scenes at Schmidt Bakery. Each person has an important role to play – from folding paper boxes to operating the fryer.

The Schmidt family will need all the help it can get to feed all those hungry customers.

“Even if it’s cold outside, there’s still a line,” Schmidt’s daughter, Cindy Todd, said. “It’s just wall-to-wall people. It’s non-stop. We open at 4 a.m. and last year I was still frying at 6 p.m. It was crazy.”

Todd, 46, handles the bakery’s finances. But that doesn’t mean she won’t be getting her hands dirty in the kitchen. In that single weekend, the bakery will go through 3 tons of cherries and twice that in flour, she said.

“We only do it once a year because it makes a mess,” Todd said. “But everyone loves them so much, so we have to make them.”

Schmidt said the business will make more money Presidents Day weekend than it does in three months.

Todd said Schmidt already had hundreds of preorders last week. And those aren’t just from locals – the bakery will be shipping Thing-A-Lings to Arizona and even Alaska.

The Thing-A-Ling has gotten so popular, Schmidt said Busken Bakery wants in on the action.

“They want to make them and give me a royalty, but my daughter said, ‘Nope,’” Schmidt said. “If we want (the business) to go on, we need to keep it this way.”

Schmidt said he plans on selling the Thing-A-Lings every year for as long as he can. While he hasn’t touched the recipe in decades, it does come in chocolate, too.

You just have to ask.

“It makes every part of your taste buds pop,” Todd said. “There’s nothing better than having one super warm, straight off the fryer. Now, that’s some good Schmidt.”