Anatomy of a pitch: The Monetizr states its case for entrepreneurial glory with Covington's UpTech 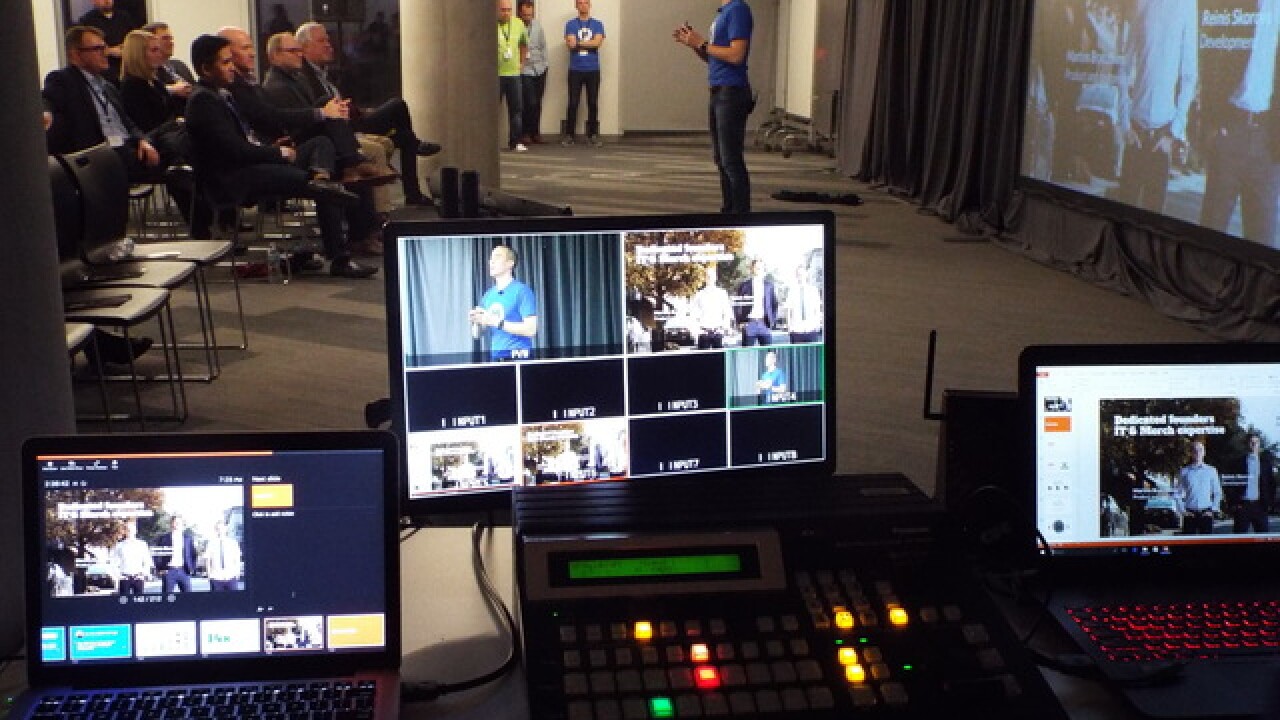 CINCINNATI -- Suppose you have seven minutes to sum up your life’s work -- the new business you’ve labored over for months, or even years. The one you hope will become the next Facebook, and reap millions.

Further suppose that you must do it in a way that clearly states what the business does -- no matter how complicated it is -- and that makes people want to invest money in it.

That’s the job Martins Bratuskins handled Feb. 9 at the demo day for UpTech, a tech-startup accelerator in Covington. Representatives from the nine businesses in UpTech’s latest class pitched their products to an audience of more than 300 people at the 84.51 building Downtown.

Bratuskins co-founded The Monetizr with two other friends in Latvia, a small country in Eastern Europe, and they all moved to Covington last year to be part of UpTech. Since then, with help from UpTech staff and volunteer mentors, they’ve worked long hours to refine their business plan, as well as their selling pitch to investors.

The Monetizr has created software for mobile game producers that helps them cash in while they’re still popular. It sells merchandise to gamers, who qualify to buy it when they reach a particular milestone in the game, like defeating an especially tough bad guy.

That merchandise might be a T-shirt or a mug with the bad guy’s image on it.

Once the gamer decides to buy, The Monetizr uses a network of manufacturers to create the merchandise and ship it to the gamer. It then splits the profits with the gaming company.

It’s not the easiest concept to explain, and Bratuskins and company went through about a dozen iterations of their pitch before demo day.

Version one described The Monetizr as “a turnkey monetization engine for mobile games.” Compared with the final version, it was heavy on text and details.

Following the advice of their UpTech advisers, the founders ditched some details, simplified the text, added more visuals and made the pitch more relatable to investors, many of whom don’t play mobile games.

They explained how The Monetizr works using photos of a gamer named Nick and using him as a character in the pitch.

Investors want to know a company’s vision, how it solves a problem, its business model and its addressable market, said Marvin Abrinica, founder of startup adviser Thrivera and one of The Monetizer’s advisers through UpTech.

But they also want to be entertained, he said.

“Just because you get the elements of a pitch down, doesn’t make it pitch-perfect,” Abrinica said. “There’s still a bit of theater involved. Anytime an audience gathers in front of a stage, you have to be ready to entertain them.”

So Bratuskins honed his pitch delivery by watching himself on video, which proved very helpful. He learned that he needed to pause more, to not look back at the screen displaying his slideshow, and that he moved around too much, which was distracting.

Since his pitch was the sixth of the night, he decided to re-engage the audience by opening with a couple of questions. He asked how many had heard of Pokemon Go, a game that was really popular last summer. Nearly every hand went up.

Then he asked how many had played Pokemon Go in the past month, and only a few hands went up.

That illustrates the problem with most mobile games, Bratuskins said. They typically enjoy only brief popularity, hence the need for game makers to cash in quickly.

The T-shirt he wore to start his pitch illustrated the same point. It graphed the usage of Pokemon Go over time. It a looked a lot like an inverted “V”.

What can solve the problem? The Monetizr, Bratuskins said, as he ripped off the T-shirt, a la Clark Kent, and revealed the Monetizr T-shirt he was wearing beneath it.

The Pokemon T-shirt was slit open in the back and taped to the Monetizr T-shirt for easy removal.

That bit of theater was suggested by UpTech Managing Director J.B. Woodruff, who said it would be cool if Bratuskins could wear multiple T-shirts. Two seemed doable, Bratuskins said, so four days before demo day, he had them printed up and shipped to him.

During the pitch, Bratuskins felt like his legs were shaking, but if they were, it wasn’t noticeable. He spoke confidently, didn’t make any stumbles and held the audience’s attention.

When he finished, he celebrated by sharing beers with his co-founders. Then they took a selfie.

After all the pitches, investors met with presenters over refreshments. There, Bratuskins said, he got the real validation: Three potential investors expressed interest and scheduled meetings.