The Rhined brings regionally made cheeses to Over-the-Rhine 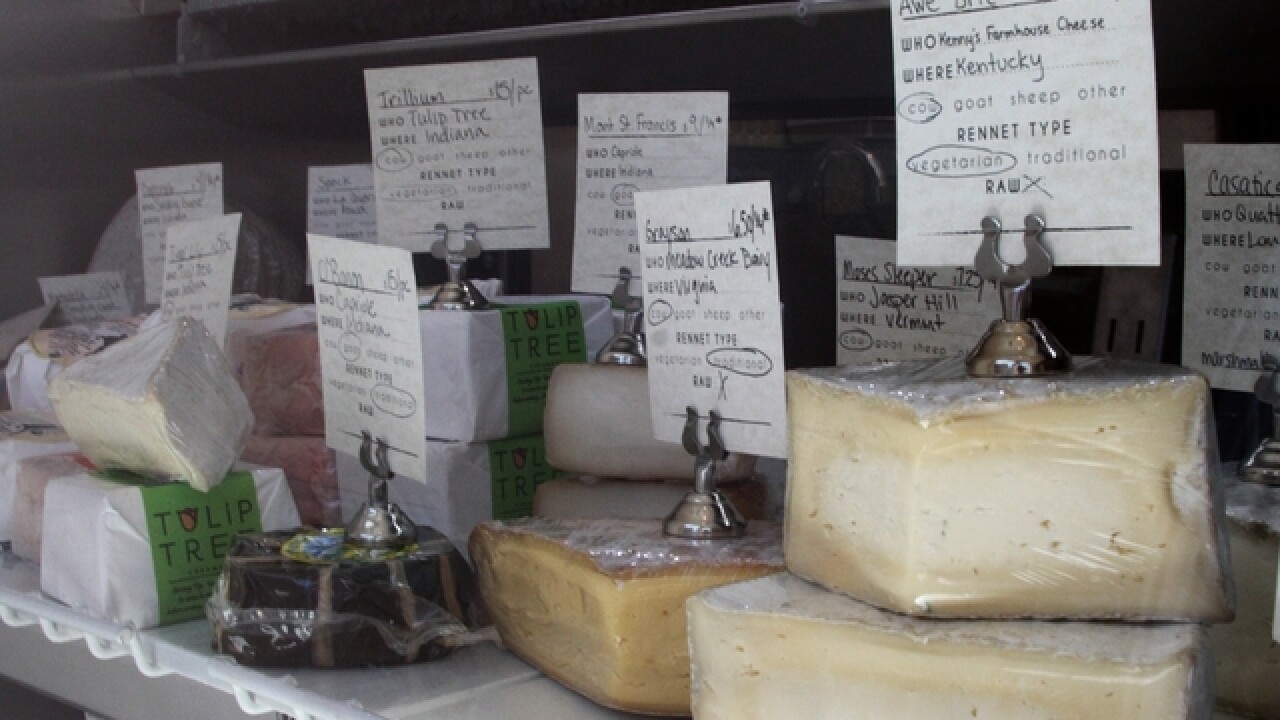 Copyright 2017 Scripps Media, Inc. All rights reserved. This material may not be published, broadcast, rewritten, or redistributed.
Brian Mains | WCPO
<p>The Rhined artisanal cheese and provisions shop opened June 21 at 1737 Elm St. in Over-the-Rhine. Owner Stephanie Webster said her shop, located across the street from Findlay Market, specializes in regional cheeses. The Rhine will host a grand opening celebration once it begins selling wine and beer by mid-July.</p>

Though she never mastered making cheese, the experience ignited her passion for it, she said. That love, coupled with her visits to cheese shops in other cities with her husband, led her to open the Rhined, an artisanal cheese and provisions shop at 1737 Elm St. in Over-the-Rhine.

“I began to appreciate a well-made cheese after I tried to make it myself,” she said. “We sort of wondered why Cincinnati didn’t have something like the shops we were finding.”

The Rhined opened last June with 45 cheeses for sale. About 90 percent of those come from Midwest dairy farms, Webster said.

“We are focusing on the Midwest and the states,” she said. “We have cheeses from Indiana, Kentucky, Ohio, Missouri and some Wisconsin things. We just feel passionate about supporting small family farms and producers.”

Webster said one of her favorite regional cheeses served at the Rhined is Flory's Truckle clothbound cheddar made at Milton Creamery in Missouri. The vegetarian cheddar, made with raw cow milk, has hints of apple, grass and minerals, she said.

"As we were doing research for our shop we were able to meet a bunch of cheese makers," she said. "They are the hardest-working people. They are working really hard to raise their animals right and produce high-quality cheeses."

The remaining 10 percent of the Rhined’s cheeses are some of Webster’s personal favorites from around the world.

“We do have a few international selections because I can’t give up my Swiss cheeses and Italian cheeses,” she said.

One of those cheeses is a Casatica made by Italian cheese maker Quattro Portoni Caseificio. The cheese is made with pasteurized water buffalo milk. The high-fat content milk is what gives the soft cheese a rich, marshmallow texture, Webster said.

Cheeses at the Rhined range from $3 to $10 per quarter-pound. Labels tell customers which animal’s milk producers used to make the cheese, where the cheese was made and whether or not it is vegetarian friendly.

“On our cheese tags we have what type of rennet is used,” Webster said. “Rennet is the enzyme the cheese makers use to coagulate their milk. Some rennet comes from the stomach lining of calves. More people than I thought appreciated that.”

Webster recommends people try a cheese flight in the store. Flights include three cheeses for $10. For $5 more customers can add meat to their tasting.

The Rhined also provides detailed labels for the regionally sourced meats, butters and fruit preserves it sells. The shop stocks about 30 wines by the bottle and glass, as well as beer, she said.

In the meantime, Webster is enjoying serving customers and educating them on the types of cheeses in the shop.

“People are just becoming more interested and educated about where their foods and drinks are coming from in general,” Webster said. “I am able to tell stories to customers about how hard these cheesemakers work.”

Customers are adventurous, she said with a laugh.

"People are willing to try anything," she said. "People eat whatever I give them. No picky eaters yet."