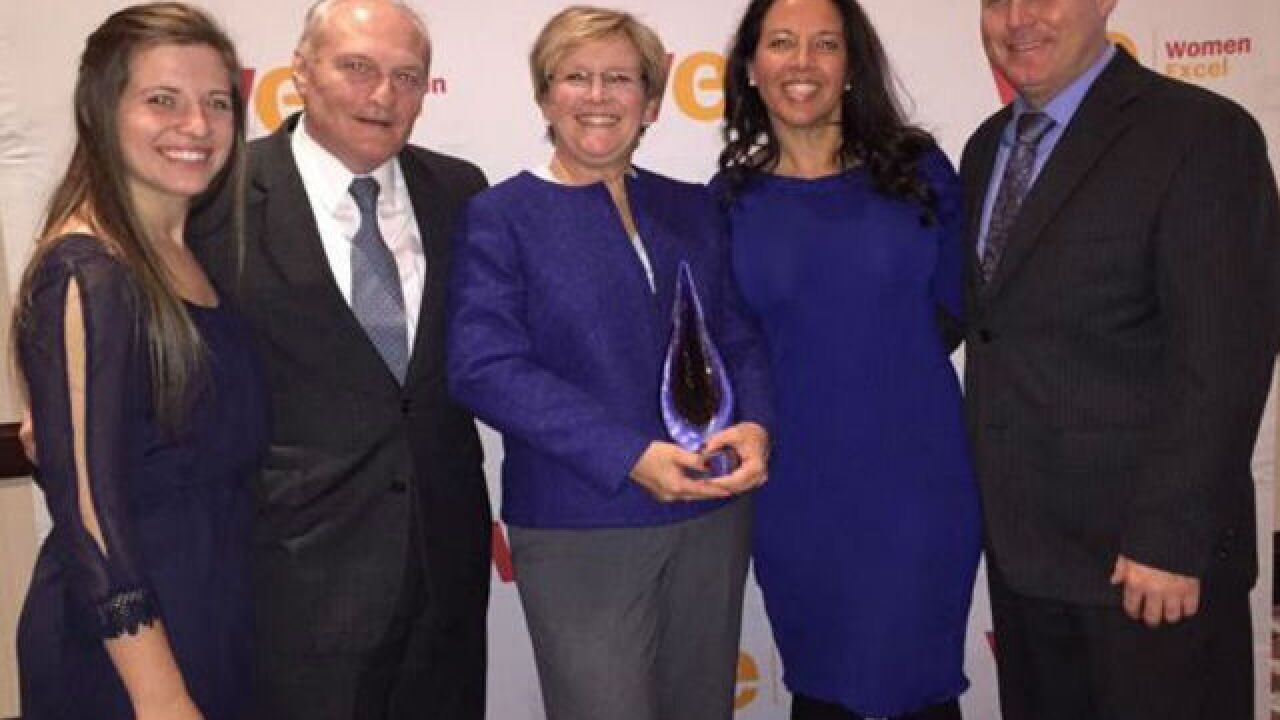 <p>Family members and JANCOA Janitorial Services employees Katelyn Bard, Tony Miller, Mary Miller, and Christy and Clint Bard attended last year's WE Celebrate Awards put on by the Cincinnati USA Regional Chamber in support of Mary Miller, CEO and majority owner of JANCOA, who received the Woman-Owned Business of the Year (mid-large) Award. Katelyn and Christy are the daughters of Tony and Mary, while Clint is Christy's husband. JANCOA has been a family-owned business since 1970. Photo provided by JANCOA</p>

CINCINNATI -- It was clear from Mary Miller’s hearty laughter that she was just joking when she described family business succession planning as "such an easy process."

And only a few minutes into an interview, it became clear why: Miller, the CEO and majority owner of Cincinnati’s JANCOA Janitorial Services , faced -- and still faces -- a series of difficult questions about the future of the business, including who will be at the helm when she and her husband, business founder Tony Miller, step aside.

Both Mary and Tony Miller are on their third marriages and four members of their "blended family" are already playing management-level roles with JANCOA.

Three other children in the family are not involved in the company. In case things need to be a bit more complicated, two grandchildren are working for JANCOA this summer until they return to school in the fall.

If you need a lineup card here, or maybe an organizational chart, you are not alone for a company that has grown to about 550 employees since its founding in 1970.

A couple of years ago, the complexity of all of these ownership and management questions alongside the overarching objectives of keeping a business running smoothly and a family working and playing together prompted the Millers to get some professional help from the Goering Center for Family and Private Business , which is affiliated with the Carl H. Lindner College of Business at the University of Cincinnati .

"We didn’t know what we needed to know," said Mary Miller, a member of the Goering Center board of advisors who acknowledged that all of the questions about JANCOA’s future have not yet been resolved.

In many ways, the odds are overwhelmingly against the success of family-owned businesses like JANCOA that are, at least initially, classified as small businesses because of their low annual revenues and limited number of employees.

While some professionals who track small businesses will report failure rates in the range of 80 to 90 percent, more optimistic numbers originate with the U.S. Small Business Administration . Widely quoted numbers from the SBA indicate that 50 percent of all small businesses survive at least five years and that about one-third of the businesses will make it to their 10th year.

But the odds decrease substantially when it becomes time to make a transition from one generation of a family to the next.

Grypp and Hutcheson, who has done some work with the Goering Center in the past, both said that the failure rate is fairly consistent each time a new generation assumes management or ownership control of a business.

"In each transition, from one generation to the next, 70 percent don’t make it and 30 percent do," Grypp said.

He also said that there is no data to support the widely held theory that family businesses routinely start to crumble when a transition is made from the second to the third generation.

Grypp stressed that it’s extremely difficult to make broad generalizations about the businesses that the Goering Center deals with on a regular basis.

Even just defining a family business can be a challenge.

The Goering Center defines a family business as one in which two or more family members "own, lead or make key decisions" for a business. The structure could be as simple as a mother working with her son or as complex as a huge corporation in which the largest single shareholders -- not necessarily majority shareholders -- may be members of a family that can influence corporate decisions, Grypp said.

Primary objectives of the Goering Center and Hutcheson’s consulting work are to keep businesses running smoothly from one generation to the next while trying to decrease friction that might arise among family members.

Of the businesses that don’t make the transition successfully, some 60 percent of the business owners reported that they "didn’t have good communication and trust," Grypp said.

"The goal … is to maintain the wealth and maintain the family harmony," Hutcheson said. "How do you transition the business from one generation to the next, figuring out who’s interested, who’s capable, what’s the reporting structure going to be, who gets what (percent of) ownership, what’s going to happen with the money, what about the kids who are not in the business?"

When those types of discussions are on the table, feelings can get hurt, Hutcheson said.

"Our goal is to get them to the other side so that they can still have Thanksgiving dinner together," he explained. "Two-thirds don’t make it, so the odds are not good, (but you) can increase the odds if people are willing to do certain things, some of which are uncomfortable … and a little bit painful. It’s tricky."

The Goering Center often helps facilitate family meetings where a lot of these uncomfortable or tricky subjects are discussed, Grypp said.

Jamie Gerdsen (third generation), who went through the Goering program with his father Jim (second generation) about 12 years ago, said one of the first revelations they experienced at the center was that so many family businesses were wrestling with similar problems.

"I think it (the big eye-opener) was realizing that we were not alone. Regardless of size, whether it was a $1 million business or a $100 million business, succession is hard," Gerdsen said.

Gerdsen, 42, is the sole owner of Apollo Home , which acquired the family business, Gerdsen Heating and Air Conditioning, as well as nine other businesses during a 14-year period that ended in 2004. The Gerdsen firm had roots that went back to 1931.

Gerdsen said one of the concepts he had to embrace at the office was "we are a business family -- business comes first and family comes second."

The Goering Center also drove home the point that the transition from one generation to the next involves what Gerdsen called a “transfer of emotional equity” in the business. He said both he and his father had to prepare to make that change. At that point, "he’s giving his life’s work up," Gerdsen said.

Like many others who work in family businesses today, Gerdsen said he started working for his father when he was in high school by “ripping out furnaces” that were being replaced.

Hutcheson said giving young family members a summer job is a good way for the older generation to make an assessment about whether he or she might have some interest in or talent for the business.

"That’s extremely common. That’s a total win-win situation," said Hutcheson, adding that it allows the young family member to earn some money while he or she also learns something about the business to determine if they might want to play a role in the future.

This also gives parents a chance to evaluate their work ethic and how they interact with people, Hutcheson said. He has first-hand knowledge about business succession in a family because his mother owned part of the Olan Mills portrait studio chain that was acquired by another company five years ago.

Both Grypp and Hutcheson said that to their knowledge, there’s not much data available about the millennial generation and its attitude toward playing a role in owning or managing family businesses.

"We’re not at a point where millennials would be in leadership positions," said Grypp, adding that there’s only a "small sample" of information about family business participation by some of the 66 million Americans who were born between 1981 and 1997, which is how the Pew Research Center defines that generation.

Characteristics of that small sample are a dependence on technology, an interest in flexibility in the work environment and a desire to work for companies that have a "worthy cause," Grypp said.

"One of the big discussion points for people in the industry and that I encounter working with family businesses these days … is that, you know, the millennials have a different perspective on work than the baby boomers did," Hutcheson said.

With the boom in technology, millennials can be linked to the company 24/7 with a smartphone, blending business and other pursuits even if they’re far from the office and even if the preceding generation might want them to adopt a more traditional definition of the work day, Hutcheson said.

"Millennials don’t think that way, and there’s a little struggle for them to behave in the manner that their parents are used to seeing workers behave in," he said. "They tend to not want to have the obligation (of running a business). They don’t have the work ethic and they don’t want the responsibility of running the business."

Hutcheson stressed that his comments were based on anecdotal observations, not detailed data that reflected findings from years of research.

He also said in some cases, it’s far easier for a millennial to take a job with a larger corporation so that he or she can leave the office at 5 p.m. without worrying about problems that face people who run businesses.

But that’s not always the case.

"One of the reasons why the millennials will join and will become dedicated to it is the legacy: 'The business has been around a long time. I’m the third generation. I’m pretty good at it. I can make a good living at it. I might want to go do something else with my life, but I decided I’m going to do this thing because I really want to carry on the heritage and the history and the legacy of this family,' " Hutcheson said.

He also said businesses usually fall apart when family members take jobs just because they see it as the easy thing to do.

"It’s the Achilles heel -- the killer of family businesses," Hutcheson said. "Kids join the business because of the money. There’s an easy job (available). 'I don’t have to look for a job. I don’t have to get evaluated by external people. Nobody’s going to point out my flaws and weaknesses because I’ll be a part-owner. I’ll be the big cheese.' "