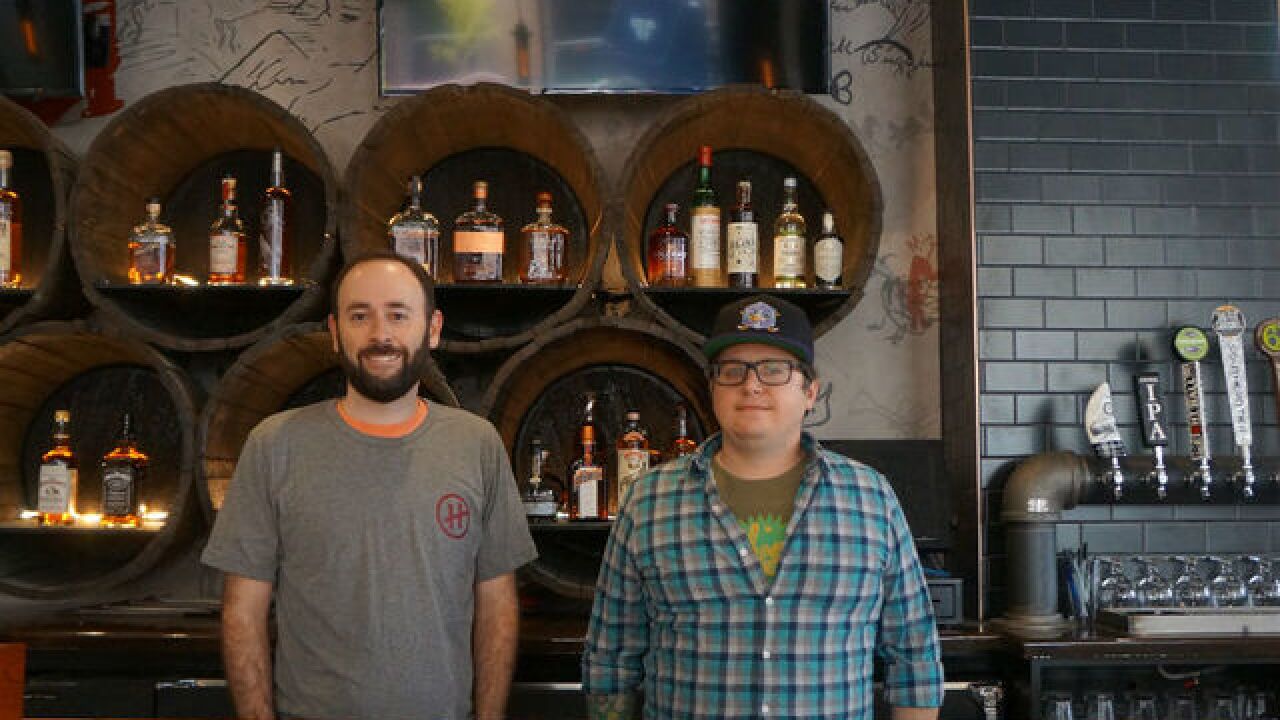 COVINGTON, Kentucky -- The Hannaford, a new cocktail lounge in Covington, opened Wednesday inside the historical 100-year-old Mutual Building at Pike and Madison streets, gifting the neighborhood with yet another sophisticated hangout.

Owners Aaron Kohlhepp, Andrew Salzbrun and Jack Weston (Hickory Wald Group) also own the sports bar Rhinehaus  in Over-the-Rhine and burger joint Nation Kitchen and Bar in Pendleton. The Salyers Group — which owns Hotel Covington, the Mutual Building and the Madison Event Center — approached them about the Hannaford nine months ago.

“We came and looked at the spot and really fell in love with it,” Kohlhepp said.

Like the group’s other bars, they wanted the Hannaford to be a neighborhood watering hole.

“One thing we do with Rhinehaus and Nation and anything we’ll work on in the future, we always talk about making an extension of your living room,” Kohlhepp said. “We want people to come in and feel comfortable. We want to be an approachable bar by pretty much anyone. We want it to be the go-to neighborhood spot for the people who live and work here.”

Near the entryway, a nexus of vintage leather couches and chairs contextualize the living room, but industrial pipes on the ceiling reveal the room's inner workings. As far as the group knows, the space had been fallow since the ’80s, when it was a jewelry store. Kohlhepp said he and his partners had a chance to start with a “blank canvas.”

“It was really just a shell, so we had a lot of opportunity to do whatever we wanted with it,” he said.

That meant keeping the original tile flooring intact and exposing some of the original wall foundation, on which they scribbled pictures of crows from Sam Hannaford’s sketchbook. A quote on the wall, “Too much of a good thing,” came directly from Hannaford’s book, Kohlhepp said: Two crows carry another crow on a gurney with, “Dead drunk — too much of a good thing” written beside the scene.

The cocktail menu features six drinks, all named after Hannaford’s architectural masterpieces, with prices ranging from $6-$10; during happy hour they’re $1 off. General manager Bill Leahy designed the menu with a “spin on classic drinks.”

Station No. 7 honors Eden Park’s old city water supply system in Old Fashioned form, made with Louisville distillery Rabbit Hole bourbon. The Lombardy is both an apartment building in downtown Cincinnati and a gin cocktail; and the Phoenix, named after the building on Race Street, is made with Espolon anejo tequila, vanilla simple syrup, lemon juice, emulsified egg white and olive oil, served in a coupe glass. Leahy described it as “milkshake-y.”

“I went somewhere and had one,” Leahy said, “and liked how it coats your mouth. It was very delicious. With the vanilla simple syrup in it, too, you get the caramel from the anejo tequila. You’ve got to really shake it, though, to emulsify that oil with the egg white.”

Leahy, who worked at Nation and then got into whiskeys at Bakersfield, introduced 70 bottles of bourbon to the Hannaford bar, stashed in cut-out bourbon barrels from Heaven Hill. Along with the cocktails and bourbon, the bar has 12 draft beers, as well as wines by the glass and bottle.

With its business endeavors, the group follows the motto of “plant a flag” in up-and-coming neighborhoods, as they did in Over-the-Rhine, Pendleton and now Covington. However, on Madison Avenue, the Hannaford is surrounded by Hotel Covington, Braxton Brewing, card shop Handzy, AmerAsia and Old Town Café, a favorite lunch spot for Kohlhepp.

After months in the making, Kohlhepp said he is anxious for Covingtonians to experience his new living space.

“I’m excited just because I’ve been here almost every day for the past three months sitting in construction, watching it,” Kohlhepp said. “I’m excited to finally see people in here.”

The Hannaford at Pike & Madison