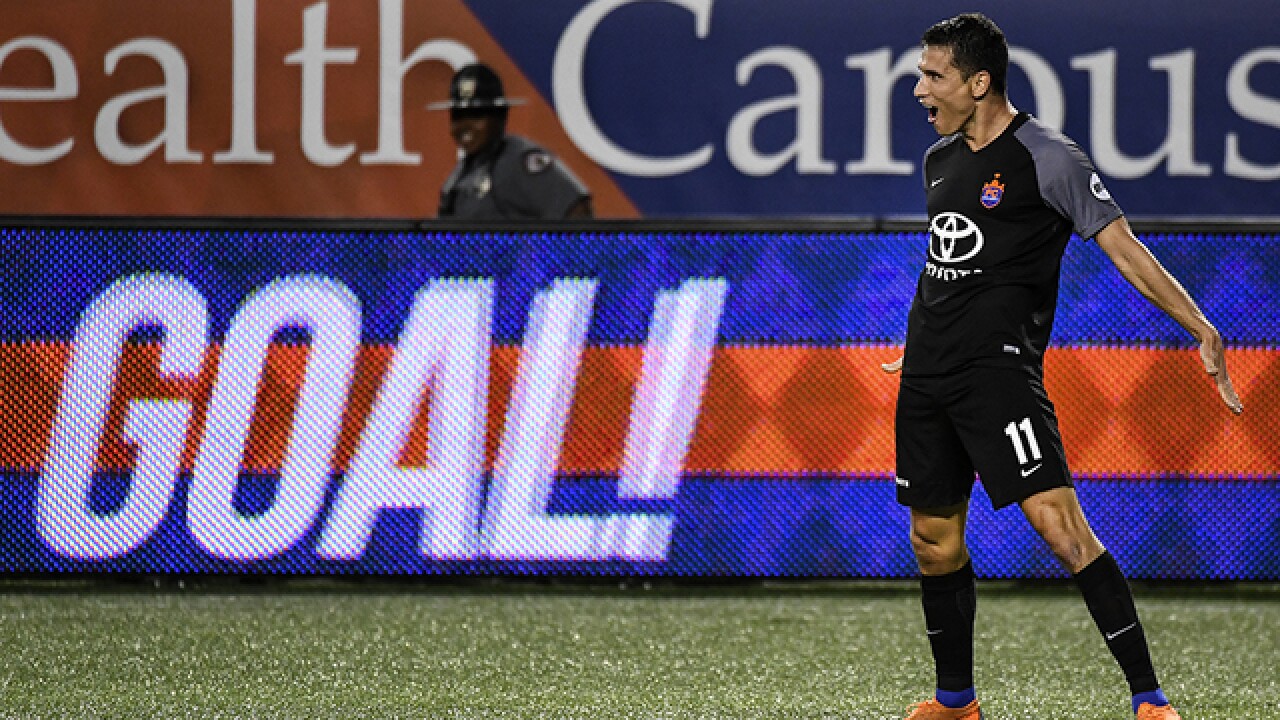 CINCINNATI -- A team that didn't register more than one goal in any of its first four games is suddenly among the United Soccer League leaders with 20 goals through 10 league matches.

Going into Saturday's game against second-place Louisville City (and Tuesday's expected invitation to join MLS as an expansion team), first-place FC Cincinnati had scored two goals or more in seven of its last eight games. That includes a pair of U.S. Open Cup wins in which the Orange and Blue outscored the opponents 7-2.

The recent surge in offense has added another level of excitement for the fans and is a big reason why the third-year club was able to climb to a first-place standing in the Eastern Conference for the first time two weeks ago. The club should be in a better position facing Louisville this time, as the rivals from Kentucky account for one of FCC's two losses, a 1-0 defeat in the home opener April 7.

"I think at the beginning of the year we had a lot of new faces, so it took a little time for the cohesion to click, but every day we're getting a little bit better," center back Forrest Lasso said when asked about the offense playing in front of him.

"I don't have a lot of experience with the offensive guys being on the other side of the field, but once you get a little confidence and catch a rhythm, you start opening your creative doors a little bit and start doing a little more and start feeling a little more comfortable. The guys up top are fantastic at it. You see it in training and (in recent games). No matter who is up there, they have a knack for scoring goals, and we've been fortunate they've been going in."

FCC has never been known as a high-scoring team; however, club president and general manager Jeff Berding tried to address that last year when he set a lofty mark for the team to tally 62 goals -- a number that would have led the league in 2016.

The Orange and Blue, while transitioning under a new coach, managed just 46 goals last year in 32 USL games, but they are on pace for at least 60 this year. FCC has scored three goals or more in six of seven games across all competitions.

"We've brought in a lot of good players that work for each other, and I think it's an unselfish group, which I think is a big difference," third-year FCC forward/midfielder Jimmy McLaughlin said.

"Every single game, every person has a role to do, and if people do their jobs and play their role and stay in the system, it's going to create goals. That's the philosophy we follow."

Eight different players have scored in league play, led by forwards Danni Konig and Emmanuel Ledesma, who have four goals each. Midfielders Corben Bone, Kenney Walker and Nazmi Albadawi each have chipped in three goals, and defender Blake Smith, forward Emery Welshman and McLaughlin all account for one goal.

Welshman had a hat trick in the second-round Open Cup game against Detroit City, a 4-1 extra-time win in which Bone also scored. McLaughlin, defender Lance Laing and forward Daniel Haber all found the back of the net in Wednesday's 3-1 win at Pittsburgh in the third round of the Cup. Pittsburgh had not yet conceded a goal at home.

It's a vast change from the last two years, when FCC relied on its center forwards to do most of the scoring. Last year, Djiby Fall and Konig led with 12 and 11 goals, respectively, with the next best scorer adding five (McLaughlin). In 2016, Sean Okoli had 16 of the team's 42 goals, and nine of those came on penalty kicks.

"We've got three forwards that have come in and really produced the goods," FC Cincinnati coach Alan Koch said, referring to Konig, Welshman and Ledesma. "We've also got Tomi (Ameobi), who we haven't used much yet, so when he gets his chance, he'll be ready to go do it. But it's more than the guys up front. A lot of the times the guys that score goals, it's the movement and the creativity behind it that sets them up for success.

"You have players like Corben and Naz and Richie (Ryan) and Kenney and Tyler (Gibson), when he gets himself back and healthy. Those are guys that create lots of space for attacking players and I think that's a big part of why the attacking players have had the success they've had this year."

The club has used Welshman as the lone center forward much of the year when utilizing a 4-2-3-1, but he's proven to be a much different player than Fall and Okoli were.

Welshman, who at 5-foot-10 is much smaller than his predecessors, seemed to struggle in the beginning when players were forcing the ball in on crosses as the team had especially done with Fall last year. However, as the team has been building up its attack through more creative ball movement and buildup from the back, FCC has been able to better utilize players up front.

"If you look at Sean and you look at Djiby, they had very set and specific skill, where I think Emery is very diverse in how he plays," Koch said. "He's a guy that can hold the ball up, he's a guy that can run behind you. He can shoot with his left. He can shoot with his right. He's a different type of player than those guys. They are more like your traditional center forward. Emery can play as a 9, he can play as a false 9 and he can play out wide too."

McLaughlin said the formation also has a lot to do with how FCC plays, and the club is getting better at taking advantage of what's given them as the guys get more accustomed to each other's tendencies.

In a 4-1 win over North Carolina FC on May 19, the club used Ledesma and Konig together in a 4-4-2, and that was about as good as FCC has looked all year. Ledesma had a hand in all four goals, assisting on three goals and scoring one penalty kick, and Konig accounted for one goal as well.

Albadawi, playing an attacking center mid, scored the first two goals using space in the center to tally the first goal from 25 yards out and receiving a great pass from Ledesma cutting into the middle for his second one from the right side of the box.

McLaughlin said the creativity looked so prevalent in that game because the diamond system calls for overloading the center of the field and breaking the opponent down through combination play. FCC just wasn't as comfortable as a group to always play that way.

"You're exploiting different areas with different systems," McLaughlin said. "But, regardless of the formation, I think we're just improving every day and getting more comfortable with each other, and that's allowing us to maybe be a little more creative.

"In figuring out each other's tendencies and everything, I think the chemistry has finally come together and that's why we're starting to jell and that's why you're seeing all these goals. I believe it's going to continue and we're just going to keep improving."

Koch has always been an attacking-minded coach, and while he doesn't care exactly how the goals come together or how many the team produces, it's enjoyable to see the offense coming together.

That's especially the case after spending the majority of last year trying to manage his lineups with a roster he didn't build after replacing John Harkes in the preseason.

"Playing attacking soccer means you are going to go create chances, and hopefully that leads to more goals, so that's why we are playing the system we are playing," Koch said. "It's why we recruited the players we brought in. Numbers of goals, we don't get into that. We focus game by game, and at the end of the day, your goal is to score one more goal than the opposition, and if that's 1-0 or 5-4, so be it.

"But, the great thing about scoring goals is the players get more confident. The more goals you score and the more individual players score, the more confident they feel and the more reassured they are in their own abilities, which I think is a big part of setting players up for success."