The Broo View: Would Bengals fans be happy to have Steelers head coach Mike Tomlin? 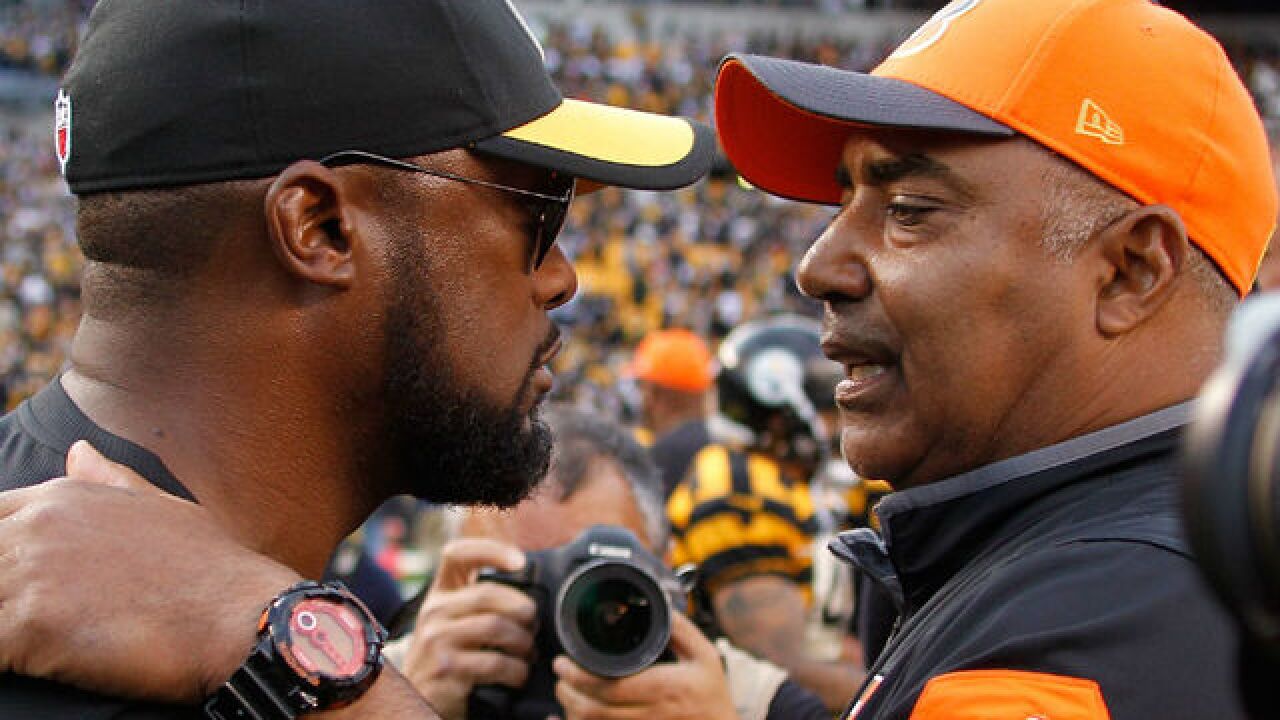 Let's suspend reality for the moment and ask a Bengals fan a question straight out of left field: Could you embrace a coach that you love to hate?

Stand by for the chorus who thinks I'm talking about Marvin Lewis. They're always the quickest to weigh in. No this isn't about Lewis. He's back for another two years, which makes this an exercise in abstraction.

So who is the one coach all of Bengal-dom loves to hate? Mike Tomlin.

Mention Mike Tomlin to most Bengals fans and the immediate reaction is revulsion, followed by anger, followed by a look of disbelief that one could ever utter the name of the man who coaches the "team what shall not be named."

The same Mike Tomlin that some of the Pittsburgh Steelers minority owners want out, in light of last Sunday's playoff loss to the Jaguars.

The same Mike Tomlin who's coached the Steelers to a Super Bowl win, another Super Bowl appearance and whose postseason record stands at 8-7. That'd be eight more playoff wins since the Bengals last won a playoff game and one more Super Bowl trophy than in Bengals team history. That guy.

Would you take him here as your Bengals head coach?

I have a lot of friends in Pittsburgh, so a lot of this is anecdotal. But apparently there has been a disturbance in the force out that way. The faithful are growing restless over a lack of Super Bowl wins lately.

One for the thumb? Check.

One for the other index finger? Got it.

One for the other middle finger? Still waiting.

And so now, it seems, that restlessness has spread to the team's 'money men.'

Maybe they've forgotten what's been going on out here with their team.

Have you seen Tomlin's record in the games he's coached against the Bengals? You know who those Steelers are like, right? They're the kid who beats the other kid up (in this case the Bengals) and takes his lunch money. You hungry?

And now, so too, Rooney's banking buddies. They do know the last time the Steelers fired a head coach, right? Richard Nixon hadn't been in office a year and no one had heard yet of Watergate.  The Super Bowl wasn't even called the Super Bowl back then. Then-Kansas City Chiefs owner Lamar Hunt was still two years away from coming up with the idea to call the AFL-NFL Championship game the Super Bowl. But I digress...

Fans are terrific. They are the epicenter of any team. No fans means no team. But sometimes the best of fans don't know how good they've got it.

The bar is set higher in Pittsburgh than in most other NFL towns. Got it.

The franchise heritage runs deeper in Pittsburgh than in most other NFL towns. Got that too.

You have to have someone in your family die before you can get a ticket to watch the Steelers play at Heinz Field. In Pittsburgh, rooting for death isn't exactly taboo. Other than the death thing, what Bengals fans wouldn't want what the Steelers have going for them?

But is there a limit to envy? Is there a line in fandom that should never be crossed, regardless of circumstance?

Let me ask you this question: Could you ever bring yourself to root for the Bengals if Mike Tomlin was the head coach? Is there far too much history to allow that? Would the past be prologue? OK, that's three questions. But I've got a guess.

My guess is, you'd be just fine with it, if it meant what he's done in the 'burgh transferred to Cincinnati with him.

Again, it's moot, at least for now. Marvin is here for another two years. No Bengals fan anywhere wants Lewis to do anything but coach the team to a Super Bowl championship. Let's be honest: you'd probably take a playoff win and call it a day. Which makes what's going on with the Steelers and their ownership group this week even more comical.

I've never interviewed Mike Tomlin, never been around the man. He was an assistant coach with the University of Cincinnati's football program about 20 years ago. I was working in Washington, D.C. at the time. Left there, came back, missed him.

But from a distance, I see a guy who seems to be all business, no nonsense and will do anything -- anything -- to win. His sideline demeanor suggests nothing less. Panic and confusion don't seem part of his makeup. Sunglasses at night, varsity jacket unbuttoned, cold weather be damned. "Go ahead, give me your best shot," is his look. Who doesn't want that? Who wouldn't take eight double-digit-win seasons in 11 years, almost twice as many wins as losses in eight years? Where exactly is that on sale these days?

Is that how Tomlin really is? Is it all him? Or would any head coach succeed, given the size, stability and commitment of the Steelers front office? Does Mike Tomlin ever fall victim to bad clock management? Does he ever get confused in the middle of games? I have no idea. I only know what I see and what the results have been.

I'm sure Tomlin has had his share of "Marvin Moments." We here in Cincinnati don't see them, most of them anyway.

Funny thing about teams and cities: Fans get so caught up in what happens in their town and the shortcomings of their hometown team, they tend to only pay attention to what goes with other teams if it affects fantasy football outcomes. Maybe not you, but a lot of fans.

I'm more than certain Pittsburgh sports talk radio was ablaze Sunday night for Tomlin OK'ing a pitch sweep on fourth and one rather than a quarterback sneak. (And they haven't run a quarterback sneak since 2014? With "Robocop" as their quarterback? That's just dumb) See, no coach is perfect. No game plan is infallible.

And sometimes, you don't know what you've got till it's gone.

My guess is, Mike Tomlin's time in Pittsburgh isn't up yet. My guess is, Art Rooney II will alert his minority partners that there's a reason why he's the majority owner. My guess is Tomlin will stay.

But if something happens around here in a year, two years when Marvin Lewis' time with the Bengals may be up, would I want Mike Tomlin to become the Bengals head coach? It's a short answer -- yes.

From exactly 288.2 miles away, Tomlin appears to be a winner. Rooney needs to tell his investors to go easy on the wine. End of story.

Now, to some random thoughts on this random Thursday...

So the owner of the Tennessee Titans said Mike Mularkey was the team's coach "moving forward." That was 10 days ago, after the Titans rallied from 18 points down to beat the Chiefs in the playoffs.

Four days ago, the Patriots throttled the Titans, knocking Tennessee out of the playoffs. Monday, Mularkey was fired. How'd that happen? And what exactly does the phrase "moving forward" mean? In Tennessee, "forward" apparently means just one day. Or one hour. Remind me not to live on Tennessee time...

Last I checked, there were only 32 head coaches jobs in the NFL. So why would an assistant coach turn down the chance to grab one of those?...

Just in case the Cleveland Cavaliers need fixing, here are some suggestions. I don't think they need fixing. They're 2-8 in their last 10. Give it a week. It might just be a mid-season swoon...

Remember when the Giants were "hot after" Billy Hamilton before baseball's winter meetings? Not anymore...

But on a better note, 44 years ago today, four of the most talented musicians in history came together, decided to work together and formed the band Bad Company.

King Crimson's Boz Burrell, Mick Ralphs from Mott The Hoople and Simon Kirke and Paul Rodgers from Free gave us one of the greatest bands of all time. All were talented musicians. But it's Rodgers voice, maybe the greatest voice in rock music, that gave this band legendary status.

Kirke is a great, great drummer. Ralphs played killer guitar and Burrell was more than solid on bass. Mix in the managerial genius of the steely Peter Grant and Bad Company was can't miss.

This was the title song, from the self-titled debt album. In its time, Bad Company, the album, went platinum (million copies sold) five times. Rodgers stayed with the band through the early '80s.

Rodgers' voice talents were so in demand, Queen wanted him to front their band after the death of Freddie Mercury. And he did perform with them for a bit, never joining full time. The band toured in 2016, without Mick Ralphs. Later that year, it was announced that Ralphs had suffered a stroke.

Rodgers continues to tour, limitedly. He's in the USA for three dates, starting Friday night. And this spring, he'll release a live CD of his 2017 tour.

But 44 years ago today, one of the best bands ever starting making music.