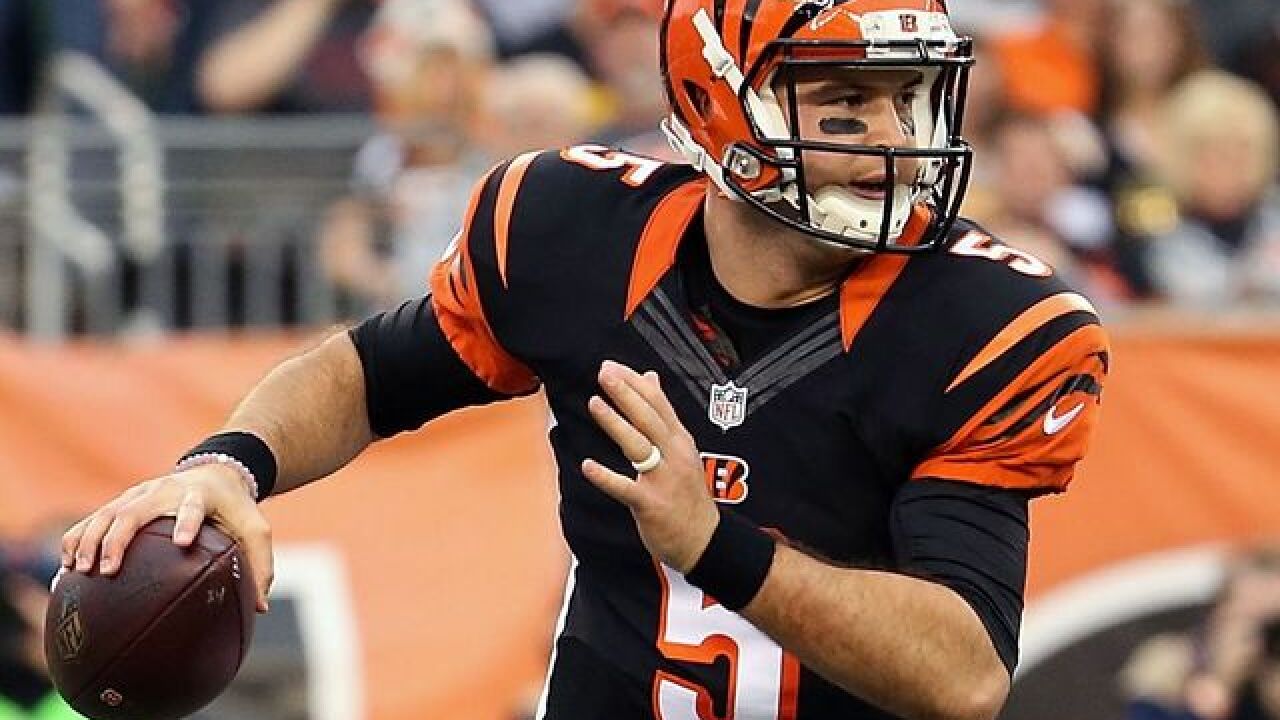 Now that the Bengals have botched the AJ McCarron situation, there may be some good that can come out of it.

I'm not a Dalton hater. Never have been. I think Dalton is a tough guy who spins a nice ball and can make a play when you have to have it.

Sometimes. When he's not throwing the ball five rows up in the stands on a fourth and 6.

Dalton isn't old, but he isn't young either. He'll be 31 this coming October. The Bengals better start considering what life after Andy Dalton will look like. Maybe they already have.

There's no doubt they fought to keep McCarron, fully believing that he still had a year left on his rookie contract. But with the Bengals, you never know if they fight for the commodity or it they're fighting for principle.

And you do have to wonder just how much they valued McCarron. Who willingly makes a trade with a division rival for football's premier position, knowing they will face that player twice every season? Maybe the Bengals knew something a lot of us didn't. Maybe they knew all along that McCarron was more "sizzle than steak." Maybe they saw the Browns coming.

Coaches are a lot of things. Almost all are control freaks. Most trust no one. But they all have one thing in common: they want to win. They will do anything to win, short of renouncing their citizenship and selling their first borns.

Marvin Lewis can be confounding in his in-game coaching decisions. Lewis has an apparent belief that taking timeouts into a locker room can somehow be converted into currency. But he wants to win football games and, despite what a lot of people think, Marvin Lewis is very smart. So if he thought AJ McCarron offered him a better chance at winning football games than Andy Dalton, McCarron would have been starting all along.

McCarron apparently didn't show enough in practice to impress Lewis or his coaching staff, at least not enough to unseat Dalton. And let's be honest, McCarron wasn't exactly overwhelming when he did get into games.

OK, he was 2-2 as a starter, after Dalton broke his thumb in 2015. The two wins were against two of the worst teams in the league (San Francisco and Baltimore). One loss (at Denver) happened when a shotgun snap went sailing through his hands in overtime. The other loss was to the Steelers in the playoffs. And for as much has fans want to exonerate McCarron for that -- hanging the loss on a fourth-quarter meltdown by Adam Jones and Vontaze Burfict -- he wasn't exactly lighting it up before all of that. McCarron had one touchdown throw, one interception and ran an offense that compiled just 279 yards.

I'm not capping on McCarron, but I'm not going to anoint him, either. He was, as almost all backup quarterbacks are, the most popular player on the roster. Do I wish him well? Yes. Do I want him to succeed wherever his career takes him now? Absolutely. Do I think his departure is devastating? Stop.

The Bengals botched his exit six ways to Sunday. Maybe the Browns were a patsy. Maybe the Cleveland owner was throwing his head coach a Dawg Pound bone when he tried to pry McCarron loose from the Bengals for a second- and third-round draft pick. The deal was done. And then it was undone by someone in Cleveland. By whom? That's all guess work. It was apparently someone in the Browns' front office (now gone) who thought it was absurd to send that kind of ransom south on I-71 for a quarterback whose lead line on his resume was "Knows Hue Jackson."

It will be interesting to see if the Browns, with a sparkling new general manager, will pursue McCarron in free agency.

But the time to have traded AJ McCarron was a year ago, before the 2017 draft. The Browns, Bills, Jets, 49ers and who knows how many others would've been listening. Who knows how stout the return would have been for AJ McCarron then. We instead got another year of McCarron sitting on the bench, entering only in games that were lost causes, and a 7-9 season.

The Bengals will eventually get something for McCarron. That's the way the NFL free agent game works. Lose a player and a year later, they throw you a draft pick. Maybe it'll be a third rounder, maybe a later pick. Maybe, like Michael Johnson, McCarron leaves here and he's back in a couple of years. Sometimes, you're sneaky smart and sometimes you're lucky. I wouldn't bank on it.

But the end game for the Bengals in all of this is a chance to find life after Andy Dalton. They pick 12th overall in this year's draft. They'll have the 46th overall. The Bengals have more pressing needs than whom their next quarterback will be. Their offensive line needs to be rebuilt. They need more playmakers on defense and depth in their secondary.

But there are also five legitimate potential franchise quarterbacks in this draft. In Mason Rudolph, Luke Falk, Kyle Lauletta and Mike White there will be plenty of options in the second round of the draft. But clearly, the Bengals now have a need they have to address, one they didn't have to have right now.

Teams rise and fall on the strength of their quarterbacks. Most teams live in "quarterback purgatory," with a quarterback who's good enough to win you regular-season games but not good enough to get you to the ultimate prize. Andy is one of those quarterbacks. After seven years in the NFL, he's not suddenly going to become Tom Brady. He's good. What AJ MCarron's departure has given the Bengals is a chance to shop for great.

Now to some random thoughts on this random Thursday...

Mark Cuban can say it was a "horrible mistake" to keep an employee accused of domestic violence on his Dallas Mavericks staff. How about the culture of "predatory sexual behavior" that Sports Illustrated says was pervasive under his ownership?

Which made what Cuban said on a podcast this week about "Losing is our best option" the least of his worries now...

Best to retiring play-by-play man Mike Patrick. I haven't seen Mike in about 20 years but knew him well from my days in D.C. Never been a classier man in a business that has far too few...

Probably a good thing the Eagles still have Nick Foles. This doesn't sound too encouraging...

I want to get a head start and wish '80s synth pop star Howard Jones a happy 63rd birthday. He'll be celebrating that Friday. Jones and his music were just about everywhere in the '80s, including MTV. He co-wrote this hit with Tears For Fears' Ian Stanley. It was from Jones' 1989 album "Cross That Line." It hit No. 12 29 years ago this spring.

Jones, of course, played keyboard on this song. His brother, Martin, played lead guitar and it's Chris Hughes on drums. Jones says the song is about not falling for superficial things, such as looks, when searching for true love. He's apparently found that. Jones and his wife, Jan, have been married for over 30 years. He's here in Cincinnati to perform at Live at the Ludlow Garage on March 10. Good luck getting tickets. It's sold out.