Broo View: At trade deadline, the Bengals did ... nothing. You were expecting something different? 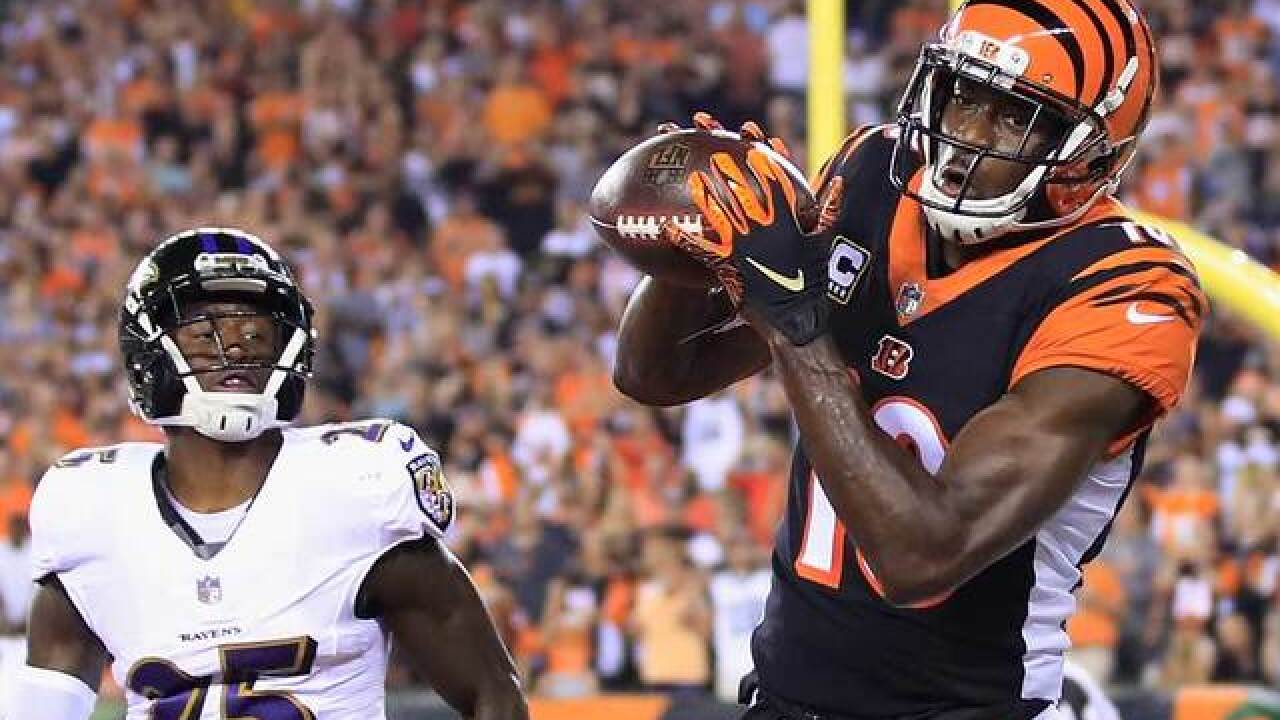 Image copyright 2018 Getty Images. All rights reserved. This material may not be published, broadcast, rewritten, or redistributed.
Andy Lyons | Getty Images
<p>A.J. Green of the Cincinnati Bengals scores a touchdown against Tavon Young of the Baltimore Ravens during the first quarter at Paul Brown Stadium on Sept. 13, 2018 in Cincinnati, Ohio.</p>

The Cincinnati Bengals never change their stripes. And there's comfort in that.

Maybe you were expecting something big last week when the trade deadline arrived, with the Bengals reeling from an injury to A.J. Green and their defense getting ripped for more than 1,100 yards over their last two games. But the Bengals chose to do ... nothing.

You were expecting something different?

The last trade the Bengals made at the deadline was in 2011, when they sent Carson Palmer to the Raiders. They got nothing immediate in return, just future draft picks.

You have to go all the way back to 1972 to find the last time the Bengals made a trade involving players. They sent Fred Willis and Paul Robinson to the Oilers and got Ron Pritchard and Charlie Joiner in return.

For the next 46 seasons? Nothing. It's the Bengal way.

They could've used a cornerback at last week's deadline. The Arizona Cardinals, privately, could have been talked into parting with Patrick Peterson. He went ... nowhere. The Bengals could have used a wide receiver. Golden Tate was there for the taking, and the Philadelphia Eagles took him. All it cost the Eagles was a third-round draft pick. But the Bengals took a pass. That's how they roll.

The Washington Redskins traded for Ha Ha Clinton-Dix. Eli Apple wound up in New Orleans. The Detroit Lions got run-stuffing defensive lineman Damon Harrison from the New York Giants for a fifth-round pick.

The Bengals? No comings and goings.

There's a belief in some NFL front offices that if a team is willing to trade a player at midseason, there may something wrong with the player. Or maybe the team doing the trading knows it's going to be a struggle to make the playoffs, so they look to begin building for the next season. Look at the Oakland Raiders. Somehow they got a first-round pick out of the Dallas Cowboys in exchange for Amari Cooper. The Eagles put their Super Bowl season into overdrive by trading for running back Jay Ajayi last season at the deadline. It cost them just a fifth-round draft pick.

The Bengals always have valued cost control over all other scenarios. And that largely means they won't trade draft picks, who in the lower rounds invariably make the minimum salary, for veterans who come with a large salary (and cap) number. Mike Brown has never, and most likely never will, mortgage the team's future for whatever immediate benefit a trade may bring. Like the Bengals in 2018 or not, the script didn't change.

How long will Green be out?  A "few games" is what the line was. Tell me Tate couldn't have helped keep Andy Dalton and the offense afloat for some games -- and it doesn't just stop there.

Dez Bryant has been available since the start of the season. He's on the "back nine," sure. But with Green down and Tyler Boyd sure to draw an inordinate amount of attention from opposing defenses for "a few games," who do the Bengals have to line up across from Boyd now? Here's a hint: No one who would make an opposing defensive coordinator sweat.

Bryant will be at Paul Brown Stadium on Sunday. Unfortunately, he'll be playing for the Saints. All it cost them was a one-year deal at a salary affordable for any of the 32 teams in the NFL.

This order of business shouldn't shock anyone who has followed the Bengals over the last five decades. The philosophy has served them well in a few seasons. Far too few. The Bengals want to win. But they want to win their way. It runs concurrent to the way the usual contenders do business.

The Bengals enter the second half of their season at 5-3. It will take a miracle for them to avoid 5-4 after this Sunday. New Orleans, even before signing Bryant, was the best team in the entire league. After that, the Bengals face a Baltimore team that is reeling but still very much alive and coming off two weeks of rest. Baltimore's defense is one of the top three in the NFL. It's not a stretch to see the Bengals at 5-5 after the next two games, having to win five of the next six to make the playoffs.

Now on to some other things that have been cascading in my head like an ocean wave ...

The USA was introduced to David Bowie 43 years ago today. He made his television debut singing this:

The show was the CBS primetime hit "Cher." She had split with Sonny Bono in marriage and performance. Bowie wrote this song but gave co-writing credit to John Lennon. Lennon's only contribution is screaming the word "Fame" throughout the song. Bowie was in the New York City Electric Ladyland Studio and had been hanging out with Lennon at some of the NYC clubs. When he told Lennon he was going to the studio the next day, Lennon showed up. There, too, was session guitarist Carlos Alomar, who came up with the guitar riff for this song. Lennon helped the recording along by playing rhythm.

After this appearance with Cher, the song rocketed to No. 1 in the USA. Later, Bowie would sing this song on the TV show "Soul Train," one of the few white performers to ever appear on that show. (Reportedly Bowie was so nervous about that, he got drunk before going in front of the cameras.)