The Broo View: Bengals have a chance at first big-time win on Monday versus Steelers 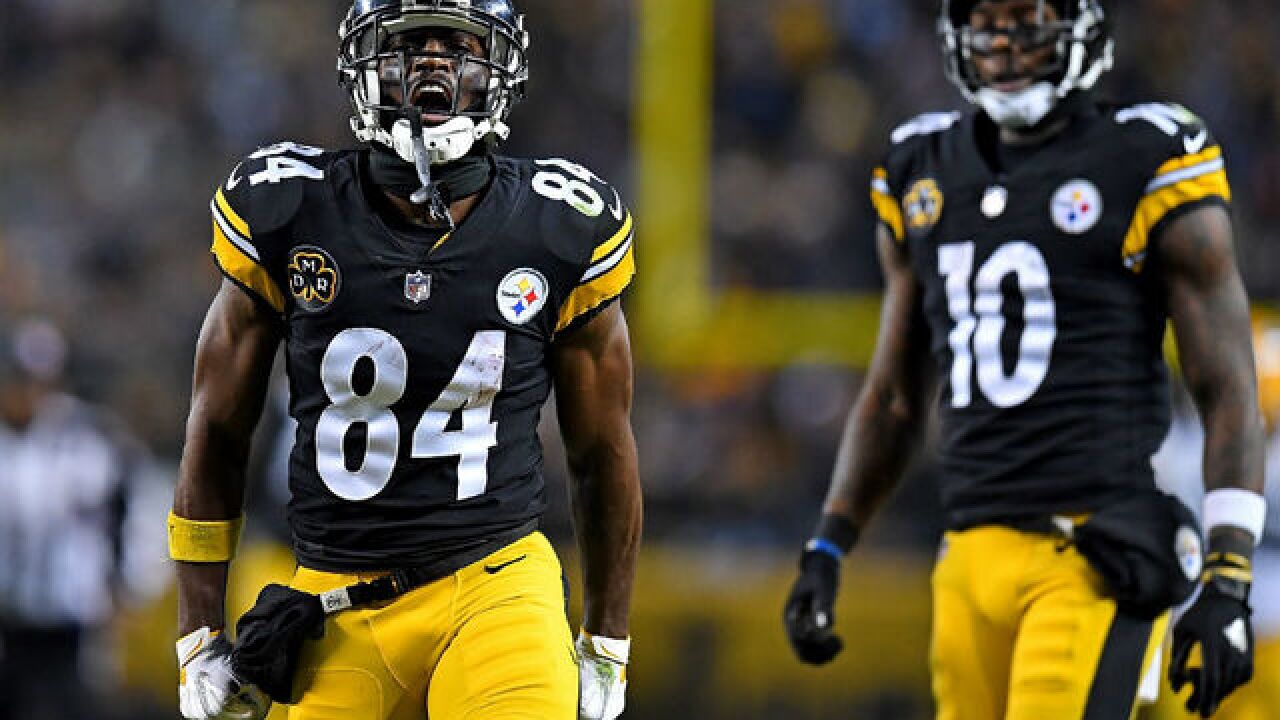 Image copyright 2017 Getty Images. All rights reserved. This material may not be published, broadcast, rewritten, or redistributed.
Joe Sargent | Getty Images
<p>Antonio Brown #84 of the Pittsburgh Steelers reacts after a catch in the first half during the game against the Green Bay Packers at Heinz Field on Nov. 26, 2017 in Pittsburgh, Pennsylvania. (Joe Sargent/Getty Images)</p>

Eventually, the Bengals will have to beat someone good. And if they can't beat a team that's good, if they make the playoffs, their exit will be swift.

Their next chance comes Monday night, when their big brother comes to town.

Respect from the Steel City has been a fleeting and inconsistent thing.

I keep hearing how great of a rivalry this is. We'll get a healthy dose of that from ESPN and other quarters as this game approaches.

Well, OK. Except, it's only a rivalry if the other guy wins once in a while. The "other guy" in this case is the Bengals. And according to the stat sheet, the "other guy" has managed a win in this series three times in the last 15 meetings. Three. The Bengals have beaten the Steelers twice at Paul Brown Stadium since 2007.

Whatever playoff dream the Bengals have centers around their ability to beat the three decent teams they have left on their schedule: at Minnesota, at Baltimore and this Monday night against the Steelers.

"Pittsburgh is a team that's going to be there in January," Bengals linebacker Vinnie Rey told me. "We're on the outside looking in. But we control our own destiny. We've got to beat teams like this. Monday night's the time to do it."

We have heard it before. But in truth, the lights come on, the stage gets bigger and the Bengals wilt.  So the delicate balancing act is creating an air of urgency, while tempering that with the ability to not get psyched out.

Even the rookies are picking up on the vibe.

"I can't really tell you the atmosphere of the locker room," Bengals rookie pass rusher Carl Lawson said to me. "Seems like, everybody's caught up to it. We know what this game means."

Possibility will tell you that an 8-8 record could get an AFC team into the playoffs this year. The Steelers and Patriots aside, the AFC side of the NFL equation is awash in mediocrity. But in reality, with at least nine wins coming from the AFC South runner-up -- either Jacksonville or Tennessee -- and with four other teams at 5-6 or 6-5 (including the Ravens), a 9-7 record is the most likely path to a Wild Card now.

Do the math. It means the Bengals can only afford one more loss in their last five games or there's no place BUT home for the holidays.

"This is the game (against the Steelers) that takes us where we want to go," Bengals wide receiver Tyler Boyd told me Wednesday. "We had to start two weeks ago, when we went 2-0. And this is going to be the toughest game. Once we get over this hump, I believe we're going to be the team that everyone wants to talk about."

The only way everyone will talk the talk is if the Bengals finally walk the walk against the team that has nothing but a roadblock for them most of the last 10 years.

Now then, so random thoughts on this random Thursday...

The fans have spoken and Adam Dunn has been elected to the Reds Hall of Fame.

You want two words that will spark lightning in Cincinnati -- other than Dusty Baker or Mike Brown -- it's Adam Dunn. He was the most amazing batter when he played for the Reds. Rarely, with Dunn at the plate, did the ball ever hit the ground. It was either a strike out or a home run. And the man could hit home runs. In a five-year span, Dunn hit at least 40 home runs and drove in at least 92 RBI. In that same span, from 2004-2007, Dunn whiffed at least 164 times in each season.

He also walked, a lot. In that span, Dunn walked at least 101 times each season. His on base percentage, the holy grail of sabermetrics, never dipped below .365. He has the seventh-best OPS (on base percentage plus slugging) in Reds history. But ...

Dunn appeared to be lazy in left field, loafed, it seemed to some. Bigger people, and at 6-6, 285 pounds, he was one of the biggest players in the game during his Major League career, often don't appear to be hustling because of their longer gait. Didn't matter, Dunn became a lightning rod for talk show callers. I could mention his name on my radio show on 700 WLW, say anything about him, and the phone lines would light up like a tree on Christmas morning.

But here is the fact: Dunn was traded in mid-2008 to the Arizona Diamondbacks and the Reds are still looking for an outfielder who can deliver the numbers Dunn did while here ...

And there's a dilemma -- the one thing you can not coach is speed. Hamilton has an abundance of it. But here's another thing you can't do: steal first base.

Hamilton has a career .298 OBP. Ater four years in the Majors, it's hard to expect that to rise dramatically, like into the mid-.300s where a lead off hitter should be.

Hamilton doesn't hit for power, or average. He's a career .243 hitter. His defense is exceptional and his speed is off the chart, but he's not a top of the order guy.

So if you're the Reds, Hamilton is quickly becoming one of those players whose talents may not be worth the amount of money it costs to keep him. He's second-year arbitration-eligible, looking at a pay day in 2018 somewhere near $4 million. His price point is still workable and another season or two of mediocre hitting (which is being generous to him) may make the market come back to him. So now might be the best time to deal him...

I claim no inside information as to what Major League Soccer may be up to with regards to expansion. But if seems to me, if its commissioner, Don Garber, took the time to talk with Hamilton County Commission President Todd Portune and walk him through why Paul Brown Stadium would not suffice as a home for a potential MLS expansion team and Portune and Cincinnati City Council finally agreed on an infrastructure plan for the proposed stadium site, MLS must really want to put one of the two new teams in Cincinnati.

Maybe it happens all the time, I don't know. But I think it shows that this process is more than a money grab by MLS and that it wants a team here. It's almost a given that the Columbus Crew is moving to Austin. Without a franchise in Columbus, there'd be no MLS teams in between Washington, D.C. and Kansas City, with the exception of Chicago.

But I can see a scenario where Cincinnati, Nashville and Sacramento all get in...

And if Cincinnati is the odd man out in a three city race for two franchises, it wouldn't be the first time. In 1974, Kansas City, Washington, D.C. and Cincinnati were all candidates for a National Hockey League expansion franchise. Riverfront Coliseum, now U.S. Bank Arena, was built for the purpose of attracting an NHL team. It never happened.

Kansas City got the Scouts (for two years before moving to Denver) and the Capitals landed in Washington, D.C. The next season, Cincinnati got the consolation prize -- a franchise in the upstart World Hockey Association. The Stingers hung around until 1979, when the WHA folded and some of its teams were absorbed by the NHL.

Dale Smedsmo was was favorite Stinger, by the way. He was a thinking man's goon. He's current NHL star Dustin Byfuglien's stepfather...

I don't know who'll win this Saturday's Crosstown Shootout. My wallet tells me Xavier. The Musketeers rarely lose at the Cintas Center and have now won 34 non-conference home games in a row.

UC's Gary Clark should be the best player on the court Saturday at noon. But the Bearcats haven't played any team of any note so far this season.

Xavier has wins over Baylor and at Wisconsin. If the game's on the line, you know Xavier is going to get the ball in Trevon Bluiett's hands. If the game is on the line for the Bearcats, who is their go-to guy?

I think eventually, UC will be the better of the two teams this season. But Saturday, at the Cintas Center and with Xavier's early season resume, it's hard not to pick the Muskies...

Thirty-five years ago today, the album that spawned this hit, "Thriller" hit the streets. It was then and remains today, one of the most popular albums in music history and remains the best-selling album of all time.

Couple of things about this song. Eddie Van Halen is on guitar and it's his riff in the middle of it that makes it. Van Halen did it gratis, as a gift to his friend and the co-producer of the album, Quincey Jones.

Right before Van Halen's solo is a sound like someone is knocking on the door.  Actually, it was an improv by Michael Jackson, who slapped the drum kit. Maybe Michael was trying to put out a fire. Those who were in the studio while Van Halen cut his guitar solo say smoke began to form, from one of the speakers catching on fire.

If some of the musicians sound familiar, you must be a fan of 80's pop. Three members of the '80s group Toto are on this song, including Steve Lukather on lead guitar, Jeff Porcaro on drums and Steve Porcaro on the synth.

"Beat It" won two Grammys for Record of the Year and Best Male Rock Vocal Performance. Seven singles from "Thriller" made it to Billboard's Top 10 and this song made it all the way to No. 1. And and you had your first chance to buy it, 35 years ago today.