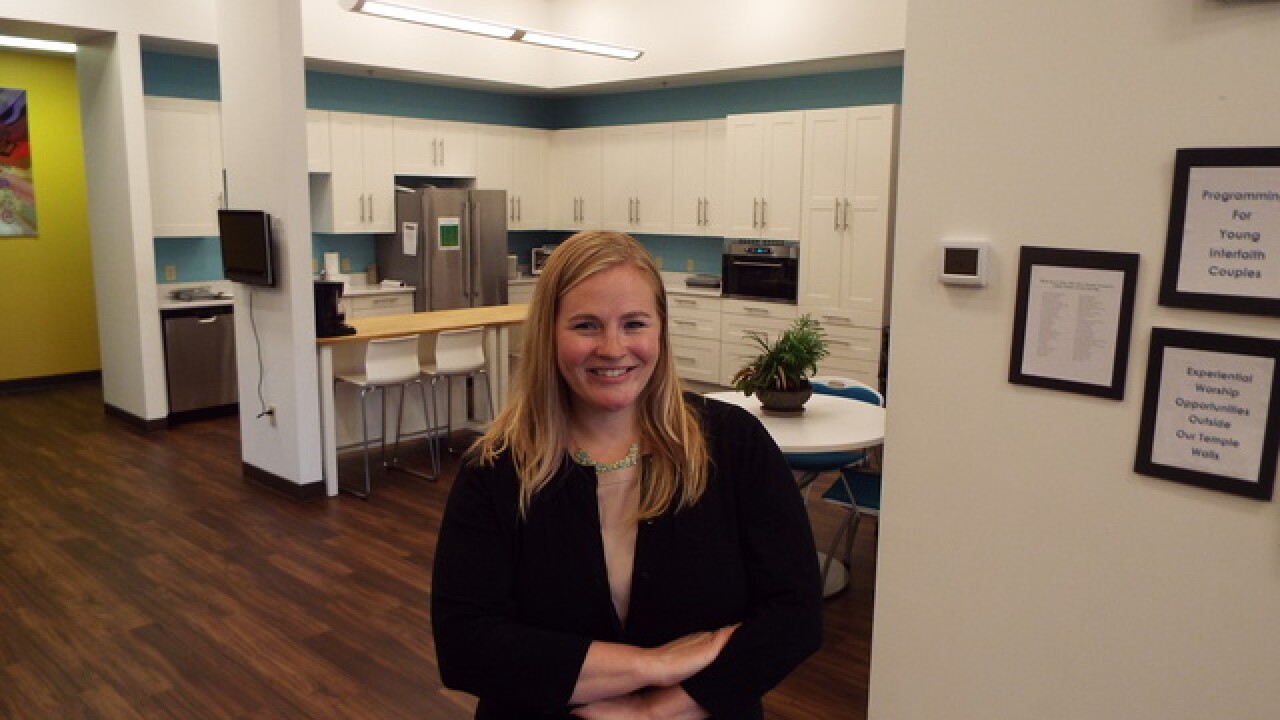 Kevin Eigelbach | WCPO contributor
<p>Rabbi Miriam Terlinchamp poses inside the new home of Temple Sholom in the Commerce Park of Blue Ash, where one of the first rooms you walk into is the kitchen, the idea being to make it just like home.</p>

BLUE ASH, Ohio - Once you’ve seen and heard the musical video that Temple Sholom made about itself, it’s hard to begin a story about the Blue Ash synagogue with anything else.

The chorus, “Temple Sholom/Is the place we call home,” set to music that sounds like a commercial jingle, wraps itself around your brain and won’t let go.

It’s one of nearly 50 videos the small, struggling synagogue has made as part of its strategy to market itself as an alternative to traditional Jewish congregations.

It opens with Rabbi Miriam Terlinchamp, 36, a blonde wearing a burgundy blouse, walking across a field and singing, “Judaism’s more than just dreidels, kugel and matzoh/There’s so much more to explore.”

She’s joined in her walk by a man and woman from the congregation, and the three sing, “Each of us is on our own spiritual journey/And we’re moving as one.”

The video lays out what makes Temple Sholom unique, and does it in a laugh-out-loud way. For example, the congregation’s emphasis on interfaith couples — about 60 percent of the congregation has a non-Jewish family member.

“But my wife is Catholic,” sings one member. Replies the chorus, “That’s great./Does she play mahjong?”

The videos not only help spread the word about the synagogue, Terlinchamp said. They also help build solidarity among the members who participate, and help them feel good about Temple Sholom.

Most synagogues spend less than 3 percent of their budgets on marketing, Terlinchamp said, but this year, Temple Sholom plans to spend about 26 percent on marketing and member engagement.

That’s part of a re-alignment of the congregation’s finances undertaken last year, when Temple Sholom sold its 30,000-square-foot building and seven acres in Amberley Village and moved into a much smaller, rented space in the Commerce Park of Blue Ash.

In the ’80s, Terlinchamp said, Temple Sholom had more than 400 members, was overflowing with children and was “the place to be” for Jews in Cincinnati. But as has been the case with many mainline Christian churches, the members grew old and were not replaced with young people.

When Terlinchamp, a native of Seattle, arrived in 2010, fresh out of Hebrew Union College in Los Angeles, attendance was “abysmal,” she said.

In order to worship, Jews need at least 10 people in a room, she said, and sometimes Temple Sholom couldn’t muster even that. “The people were without hope,” she said.

Rabbis typically work under a three-year contract, she said, and when hers expired, the board told her there wasn’t any money left to pay her.

She advised the board it could fire her and hire a part-time rabbi and stay in the building, or sell it and downsize. After much discussion, in September, about 90 percent of the congregation voted to sell.

“I grew up there. My children grew up there,” he said. “But that was the reality of the situation. Times change.”

The Jewish Foundation of Cincinnati, the former owners of Jewish Hospital, paid $2.1 million for the synagogue and property, which is just across the street from the Mayerson JCC of Cincinnati.

Temple Sholom invested $1 million of the proceeds in a five-year, guaranteed note with Goldman Sachs, Terlinchamp said. The rest was put into a five-year budget with new spending priorities.

For example, the costs to operate the building now amount to just 10 percent of the budget, while 57 percent pays for staff. New positions include an education director and an engagement director, whose job is to help newcomers get connected with members of like interests.

Because working on the Sabbath is prohibited, Jews don’t pass a collection plate at worship. Instead, they ask members to pay dues, and send them a monthly invoice.

This year, however, although Temple Sholom will still depend on donations, it won’t be asking for dues. As an alternative funding source, Terlinchamp plans to pursue grants.

Because of the move, leaders thought the congregation would lose 30 percent of its members. But instead, it lost only eight members and gained another 36, Terlinchamp said.

The new sanctuary, which was dedicated last month, seats only 100, but because weekly attendance is now about 80, it seems fuller than the old synagogue, Terlinchamp said.

This week, she was making plans to hold this year’s Rosh Hashanah service at Rockwern Academy, a Jewish day school on Montgomery Road, because she doesn’t think there will be enough room at the new Temple Sholom.

Solomon sees the current space as a transitional one, he said, and expects that the congregation will find a permanent home as attendance picks up.

He said he feels good about the congregation’s future.

“We have to be different to attract new people,” he said. “You just can’t operate under the same business model as you did 10 years ago.”