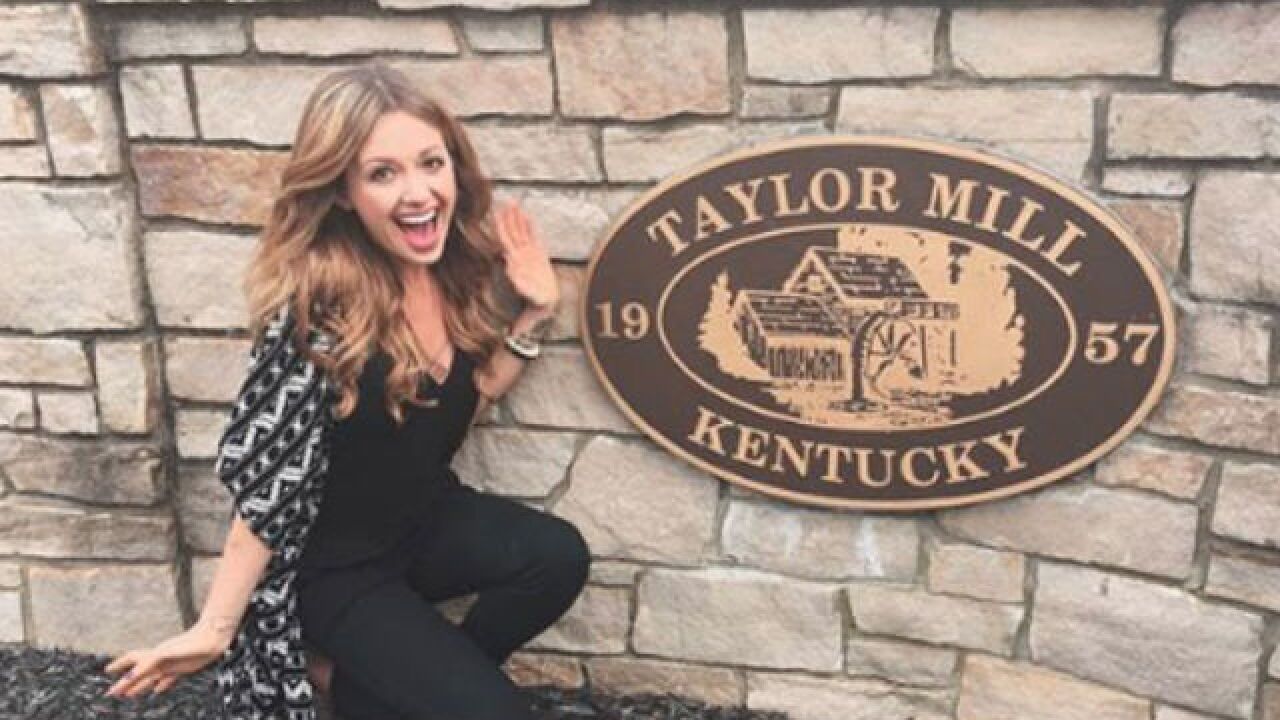 Copyright 2017 Scripps Media, Inc. All rights reserved. This material may not be published, broadcast, rewritten, or redistributed.
<p>Country singer Carly Pearce attended Scott High School in her hometown of Taylor Mill before heading down south to chase her dreams. Photo provided</p>

COVINGTON, Ky. -- It happened somewhere on a stop between Orlando and Las Vegas, when she was traveling the country on a recent radio tour. That's when it all became clear to Carly Pearce.

Her dreams were coming true -- and it was so powerful that she started to cry.

"It was a couple of nights ago," she said, in a rare moment between radio appearances. "I broke down to my drummer, who's been traveling with me. I started crying because I was so happy. And then, finally, he was like, 'OK, stop it. This is weird.' "

Pearce laughed at the memory. It's one of the few moments during this wild ride where she's had time to reflect on her success.

There's the hit song, tearing up the country charts. There's the album, due out in the fall, and the touring all around America.

Without sounding cliche, she really is the talented girl from the small town making it big in the face of enormous odds.

"You can never really prepare yourself for this tornado," Pearce said, laughing again. "But it's been the best thing for me -- more than I ever could have imagined."

The 26-year-old singer and songwriter grew up in Taylor Mill, Kentucky, about seven miles south of Covington. A precocious talent, she sang in a bluegrass band at age 11. By 16, she'd convinced her parents to let her leave Scott High School to move to Pigeon Forge, Tennessee, where she performed shows at Dollywood.

"I went to my dad and said, 'I want to go and sing and perform at Dollywood,' " Pearce said. "And my parents definitely made me think about it. We researched schools there, and I really don't think they thought I was going to do it, but everyone who's ever known me knows this is what I always wanted to do."

So that's what she did.

She worked hard -- six shows a day, five days a week -- before moving to the Country Tonite show, which provided exactly one day off per month.

At 19, she trekked to Nashville to write songs and perform as a country artist. She'd always loved country stars like Dolly Parton, Shania Twain, Trisha Yearwood and LeAnn Rimes, and finally, she was on the road to living her dream.

Pearce performed in iconic places such as The Bluebird Cafe and met songwriters and producers. After a few years, she scored a developmental contract with a major label, and she thought she'd made it.

But after eight months, the deal fell through, and Pearce was essentially told to go back home.

"I've had so many doors slammed in my face," she said. "I really feel like I just had to keep my faith and my belief that God was pushing me toward this. At the end of the day, every day, I knew I was meant to do this."

How did she get her momentum back? Again, she worked hard.

In 2014, while performing and writing, she was cast in a music video for “Pretty Little Liars” star Lucy Hale, who was trying her hand as a country artist. Pearce asked to join Hale's tour and earned a spot as a backup singer. That led to collaborations with superstar producer busbee, whose real name is Mike Busbee, which led to a new developmental deal with music company BMG.

She recorded a duet with the Josh Abbott Band called “Wasn’t That Drunk,” which boosted her to country radio’s top 40 for the first time. Then she was invited to tour with Hunter Hayes, the Eli Young Band and Kelsea Ballerini.

Then one of her songs, written about a painful breakup, transformed her future.

Telling the tale of remembering a love lost, the song became a SiriusXM "Highway Find" and earned her a place on CMT's Next Women of Country list. The deeply intimate lyrics had attracted more than 50,000 downloads and a brand new record deal with independent powerhouse Big Machine Label Group.

"It's so crazy that I'm signed to a record label," Pearce said. "I'm just trying to stay true to who I am and let everybody know what I bring to the table in country music. I write about things I'm going through, or what friends are going through. I just try to be genuine."

It seems to be resonating with country fans, but she never realized that "Every Little Thing" would be the song to change her fortune.

"It's very much true to who I am," she said. "It's haunting and melodic. Still, I never thought I would be out here fronting a song like this. But I wrote it from a real, uncluttered place. It's very country."

And it has led to some amazing moments.

"I'm out here in Las Vegas for the (Academy of Country Music Awards), walking the halls with these amazing artists," Pearce said. "I'm walking down the hall, and there's Chris Young and Josh Turner. And they turn to me and say, 'Oh my God, I love your song.' That's unbelievable."

So what comes next for Pearce? Her debut album is halfway finished, she said, and it should be ready by the fall. She added that we might also be in for a performance in our area sometime soon.

"I always have love for Cincinnati and my home," she said. "Just to have all this happening to a little girl from Northern Kentucky, who dreamed of this her whole life ... I've waited for this for so long, and now it's all finally happening."