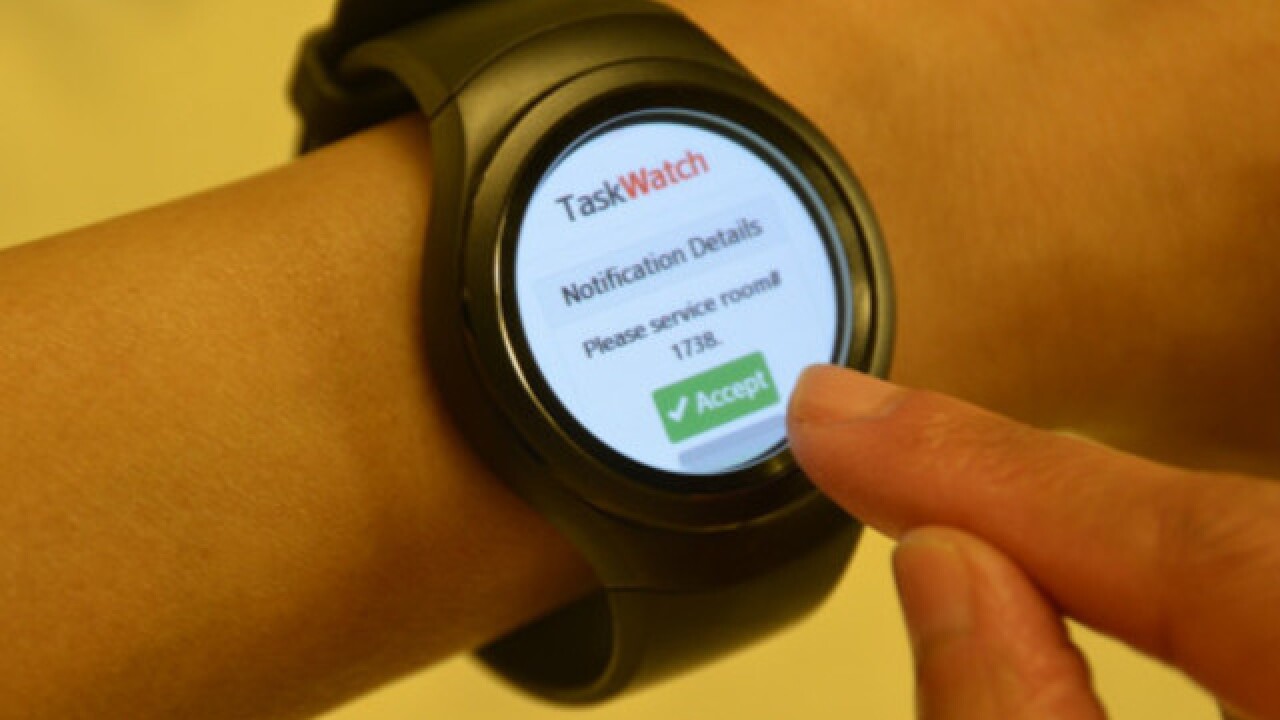 Those quaint devices you strapped on your wrist so you’d never have to ask anyone what time it was?

Wouldn’t it be great if a watch told you what you ought to be doing throughout the day, and reminded you of tasks you’d forgotten?

Would that be great, or would you just feel like you were being watched – all the time?

If you work in an industry that requires you to keep your hands free, you might get the chance to find out. At least, that’s the hope of Bharat Saini, the owner of Mason-based Hipaax.

Hipaax has created software it calls Task Watch, which provides notifications to employees via smartwatches. His company recently partnered with Ridgefield Park, N.J.-based Samsung Electronics America to put its software on their smartwatches.

How Does it Work?

Generally, a supervisor will send a task to an employee, with a time to have it completed. When it’s complete, the employee uses the phone to answer yes and no questions about what was done. The supervisor monitors the tasks using a computer dashboard.

For example, one of Hipaax’s customers, whom Saini declined to name, is a restaurant chain whose servers wear the watches. Every eight minutes, the system reminds the server to check tables, and when guests check out, it sends a reminder three minutes later to buss the table.

Saini moved to Cincinnati from India in 1993 to work for General Electric Co. as a data manager. He left nine years ago to go into business for himself, and created Hipaax in 2012.

The company initially worked on a hardware device that dispensed medications at the point of care. That involved sending notifications to clinicians that medicine needed dispensing.

Because getting approval for medical hardware devices takes so long, Saini said, he decided to focus on the notification business, and eventually came up with Task Watch.

How Does it Make Money?

Three ways: A monthly fee for hosting the platform, a licensing fee for all the devices that it’s used on and a consulting fee for customizing it to a particular industry.

Saini declined to share revenue figures, but said the company has three major customers -- a restaurateur, a retailer and a logistics/operations company.

So far, only Saini. He declined to say exactly how much he’s invested. Last month he began a campaign to raise $3 million from venture capital companies on the West Coast.

Once he raises the funds, his goal is to increase staff from four to at least 14, and create teams that can recruit more customers.

The system has value for any employees who need notifications but also need to keep their hands free, Saini said, such as hotel cleaning staff, health care workers and police officers.

It wouldn’t have as much value for employees who sit at computers all day, he added.

Because Task Watch makes smart watches useful, and when they’re not useful, people tend not to charge them and to forget about them, said Bo Hyun Moon, Samsung’s senior director for enterprise wearables.

“If it will help you manage tasks, it instantly becomes useful,” Moon said. “(Saini) is really focused on that.”

The option of providing his software gives Samsung a foot in the door with many business customers, Moon said.

What Do Employees Think Of It?

Initially, Saini said, he feared they would see it as Big Brother watching them, but that hasn’t been the case so far.

One feature that makes it appealing: Employers can use it to offer prizes to the most productive employees.

It can also be convenient because it can eliminate the need to fill out paperwork, Moon said. For example, instead of making notes on a paper chart or at a computer, a nurse who checks on a patient can press a few buttons on a watch.

Moon envisions a time when employees can use smart watches to check in and out of a building, replacing the need for badges and time cards, as well as for planning their work.

“They could become the dominant (personal) device,” he said.