Kidding around allowed during goat yoga at Sunrock Farm 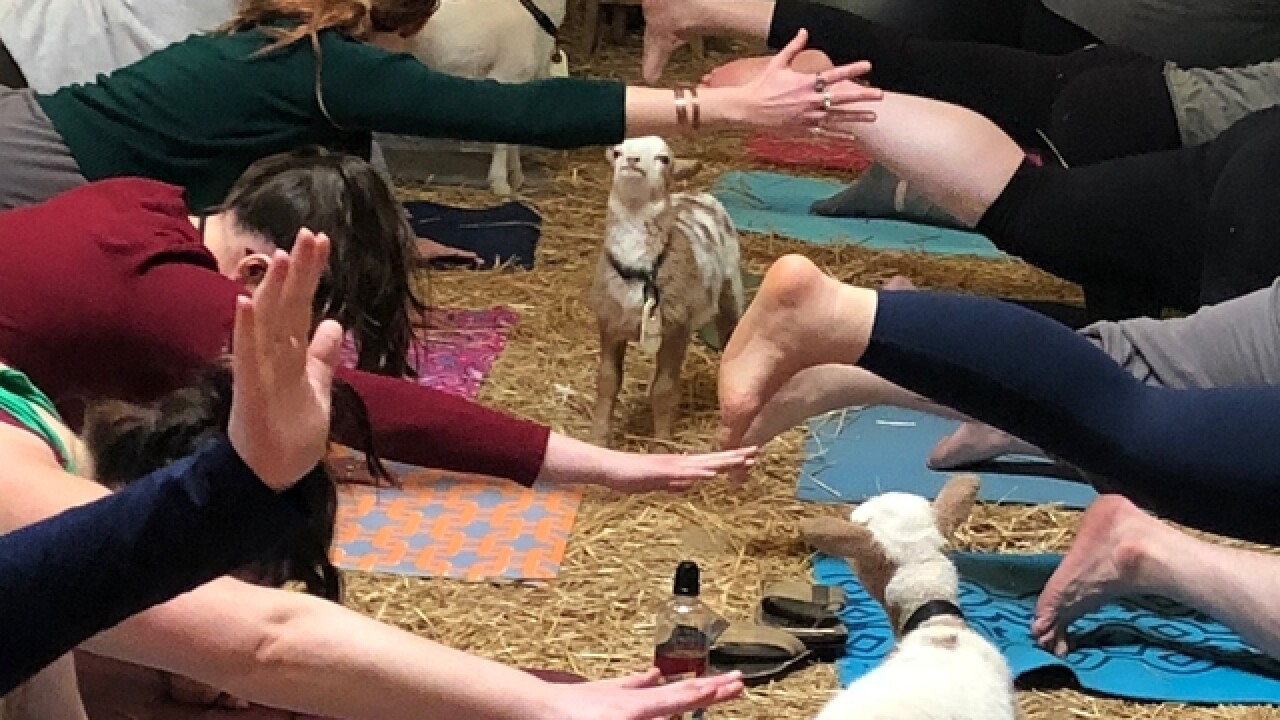 WILDER, Ky. – Sunrock Farm is a special place for many people who grew up in Northern Kentucky.

Thousands of adults share childhood memories of visiting the 100-acre farm in Wilder, Kentucky, for school field trips and summer camps. And many of them now send their own children to Sunrock to get their hands dirty and milk goats just like they once did.

"We started doing this, gosh, it's been more than 30 years," said Carol Pitzer, who works on the farm. "It's always been a way to get kids out into nature, to learn about biology and make a connection with the natural world."

Now the Friends of Sunrock Farm, a nonprofit fundraising group that supports Sunrock, wants adults to return to the farm to support its mission: giving underprivileged children the chance to tour the farm and attend special programming such as summer camps. And the group is using unconventional ideas to woo adults back.

"Now I'm at the point as the president, 'Let's try some fun new things to try to energize the base to get more people involved,'" Southgate said. "I'm trying to find ways to raise money for the farm by bringing more people to it and raise its exposure."

The Friends of Sunrock Farm hosted what Southgate hopes will be the first of a series of new events at the farm on April 21: "goat yoga" held in partnership with Rooted Yoga .

"A majority of the people coming to these events have never been to yoga," said Jessica Esme Starr, owner of Rooted Yoga, which is based in Covington. "The questions I am fielding are a little interesting."

Southgate said she approached Starr about partnering with the Friends of Sunrock Farm because Rooted's community-driven philosophy is similar to Sunrock's.

"It was obvious to me that this would be a perfect partnership," Southgate said.

Frank Traina, a former professor of sociology at Northern Kentucky University, opened Sunrock Farm in 1978 to school tours, summer camps and educational programming geared toward putting children from all walks of life in touch with the natural world. Traina, better known as "Farmer Frank," died at age 71 in September 2014.

Since Traina's death, the  Friends of Sunrock Farm  group has continued to promote the farm's mission through its fundraising efforts.

When Rooted Yoga posted the first, mostly adults-only goat yoga session on Facebook , the event filled so quickly Southgate and Starr created a second session the same day. They then added a third class that will take place at 10 a.m. May 5 at Sunrock Farm.

Starr capped the two-hour yoga classes to about 25 participants. Each session costs $25, with all proceeds benefiting the Friends of Sunrock Farm.

Southgate described the sessions as a "lightweight yoga class" followed by cuddle time with baby goats, chicks and other small farm animals.

"I've been to regular yoga but am no expert," Pitzer said. "I think there's going to be a lot of giggles and fun at each session."

The animals participating in the yoga classes receive veterinarian check-ups before each event and are used to being handled by people, Southgate said. The animals are the same ones that regularly interact with children on the farm.

Goat yoga will go on hiatus this summer as the baby farm animals grow up. Southgate said it's not plausible for adult goats to participate in the yoga class: No one wants a bite or a headbutt while in downward-facing dog. However, the Friends of Sunrock Farm and Rooted Yoga hope to resume goat yoga classes in the fall when a new batch of baby animals is ready to play.

Southgate is also currently planning other unique summer events, and Pitzer said she wants to make people aware that the farm also hosts private corporate events and other activities.

"We are hoping (goat yoga) exposes the farm to a larger audience of people," Pitzer said. "We can do all kind of things at the farm, so the Friends can help raise money for subsidized admission fees and to reach its mission."