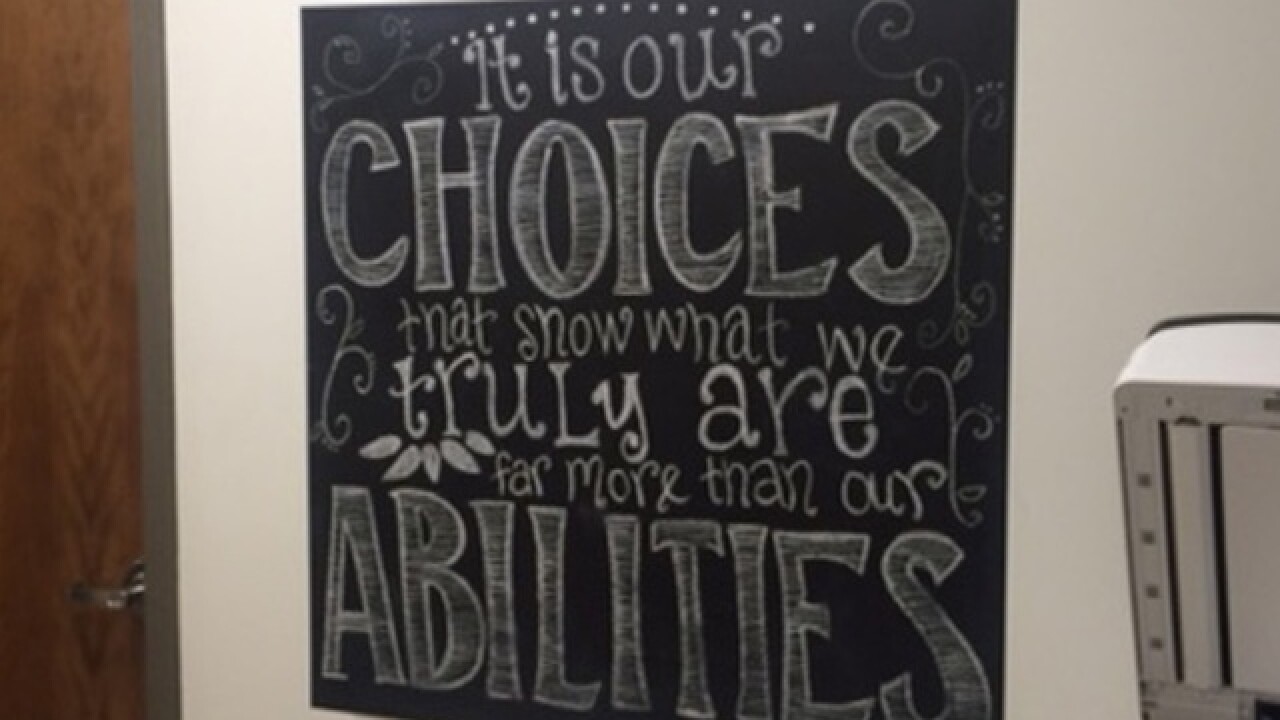 Highland County resident Savannah, 28, doesn’t remember being rushed to the hospital the night of her second heroin overdose. Her heart had stopped beating. She was lucky she made it long enough to be revived.

But she does remember what she did after she left the hospital: She picked up more heroin on the way home.

“I can’t even explain my process of thinking when I was using,” Savannah said. “Your next hit is all you’re thinking about. It’s just a constant chase. It’s miserable.”

From the outside, things in Savannah’s life might seem pretty bleak; she’s serving felony probation in two counties, and she’s about to finish up probation for another misdemeanor conviction. Her boyfriend, who had also previously struggled with a drug problem, died of what authorities believe was a heroin overdose three months ago.

But the single mother of two said she sees her legal problems as a blessing, because they led her to Sunrise Treatment Center. She’s grateful to be free of heroin’s grasp.

Sunrise Treatment Center opened its doors at its new Forest Park facility on April 11, and Savannah was one of about 40 patients that transferred from Sunrise’s original Bridgetown location for convenience’s sake.

After less than three months in operation, Sunrise’s Forest Park location is already treating nearly 200 patients, with more on the way all the time.

Sunrise Treatment Center founder, CEO and CFO Dr. Jeffery Bill traces the roots of our country’s heroin epidemic to the ’90s, when the prescription of opiates to treat chronic pain became commonplace. Studies showed that opiates, which had previously only been prescribed to cancer patients and the terminally ill, showed promise for managing pain from a litany of conditions, including arthritis, back problems, multiple sclerosis and fibromyalgia.

But those studies, it turns out, may have been a bit short-sighted — according to Bill, they “unleashed hell.”

By the thousands, people who had started out with a legitimate medical concern slowly but surely became addicted to opioids. When doctors would no longer prescribe the drugs, addicts would turn to the streets. And when the pills were too expensive, heroin — cheaper and easier to find — was there to take their place.

That’s what happened to Savannah, who had never even heard of heroin when she was growing up. She was against drug use. But in her early 20s, she started dating a man who used pills, and she didn’t see the harm in the occasional Vicodin. By 25, she was hooked on heroin, and there was no turning back.

“I’ve been treating opiate addiction for 10 years now, and I have encountered thousands of patients,” Bill said. “I still think it’s less than two hands that I would need to count the number of people who told me the first opiate they ever used was heroin.”

The dawn of Sunrise

Bill first became interested in addiction medicine in 2006 when he joined a practice with another physician who was trained to prescribe Suboxone, a drug used to help treat opiod addiction. As that physician was set to leave the practice, Bill was asked to receive the same training and take over the treatment of opioid-dependent patients.

“I really thought a lot of (Suboxone). I was excited by its potential,” Bill recalled. “I thought that there was a definite need, and I wanted to devote more of my time and energy to try to help people manage the disease of opioid addiction.”

In October 2007, five patients followed Bill to his new practice. It wasn’t long after that that Bill had reached the legally limited number of 30 patients he was permitted by the Drug Addiction Treatment Act (DATA) of 2000 to prescribe Suboxone, and he applied for a waiver to increase the amount he could treat to 100. By July 2008, he was looking for another doctor to join his practice to keep up with the demand for treatment.

“From that time on, it’s not like the phone calls stopped coming,” Bill said. “Every day, I would be contacted by someone who needed help, and I would have to keep a waiting list, and just called whenever I could. But with that patient limit in place, there was nothing I could do unless I could find another physician willing to join the office.”

But the stigma surrounding addiction medicine made the search difficult, the doctor said. Though frustrated, Bill pushed on for four years with 100 patients and, at times, as many as 200 more on the waiting list.

Things turned a corner in late 2010: While working toward an additional board certification in addiction medicine, Bill met Steven Smith at an addiction treatment facility. The two men shared a passion for helping people suffering from opioid dependency, and they decided to collaborate on a new model of outpatient care for opioid addicts.

The two deployed their new model in 2012, when they opened Sunrise Treatment Center in Bridgetown. After intensive intake evaluations, patients are prescribed Suboxone and receive a regiment of regular counseling sessions and meetings with a physician. Because the center dispenses Suboxone, the DATA-mandated patient limit doesn’t apply.

Veronica, 43, is the rare Sunrise patient who started out using heroin. She grew up around drugs, and she partied through her 20s. When she was 27, she started dating a heroin addict, and soon became one herself.

Veronica spent years on the streets of downtown Cincinnati. She prostituted herself to make money to buy drugs. She was a jail regular. Through intravenous drug use, she contracted both hepatitis-C and HIV.

By the time she was 34, she was ready to be done with heroin. But it would take years for her to get clean.

“I was just tired of being sick all the time, never feeling good, chasing drugs all day,” Veronica said. “You don’t have a life. That’s all your life consists of. I just got tired.

“I was overdosing a lot. An ambulance came and revived me — that happens pretty often when you’re using heroin.”

She tried to quit with methadone, another opiate, but that just got her high. It was Suboxone and a 16-week intensive outpatient stint at Sunrise that finally got her off of heroin.

“The transition to Suboxone is pretty easy,” Veronica said. “(The hard part is) what to do with your time after you’re not on the drugs anymore. Doing the Suboxone, it was easy.”

Suboxone, which has been used to treat opioid addiction since 2002, is medication that contains buprenorphine, which partially stimulates opioid receptors, and naloxone, which is intended to make attempts to abuse the drug unpleasant. Patients take the medication by dissolving it under the tongue.

Unlike methadone, Suboxone use doesn’t result in a euphoric high. Instead, it relieves someone suffering from opioid dependency of the effects of withdrawal and the desire to use opiates like heroin again.

When patients are first admitted to Sunrise, they must have ceased use of opioids for long enough that they begin to experience withdrawal symptoms. Patients’ needs are evaluated based on the intensity of their withdrawal symptoms, Bill said.

“This medication is very effective, and with the counseling services and support that we have here, the large majority of our patients stabilize very quickly and get to the point where they have stopped using substances very quickly,” Bill said.

Just like heroin and methadone, Suboxone does have withdrawal symptoms, and patients who are being prescribed Suboxone must be weaned off of it. Sunrise doesn’t set a timeframe for patients to attempt ending their use of Suboxone, and instead makes those decisions on a case-by-case basis.

There have been no long-term side effects of chronic use of Suboxone, said Bill, who observed that patients suffering from other chronic, progressing, relapsing diseases aren’t expected to discontinue their medications.

“No other disease has that expectation, but for some reason, that is the expectation of treatment of addiction with medication,” Bill said. “That’s been an interesting experience for me.”

“A desperate lack of treatment providers”

Demand for treatment services at the Bridgetown location began to outpace the facility’s capacity, and soon a waiting list again started to mount.

Though most patients lived within 20 minutes of the Bridgetown facility, Bill and Smith eventually started searching for a second location in Butler and/or Warren counties to address demand and provide access to more opioid addicts.

“People believed that we would be bringing people with drug problems into their community, whereas the reality is that their community has a raging substance problem and a desperate lack of treatment providers,” Bill said. “But they see it the other way around.”

Eventually, Bill and Smith learned of a building for sale on Northland Boulevard in the city of Forest Park. They approached the city in 2015. Though they weren’t optimistic about their chances, they met with the city council and its planning commission. But the city’s officials were impressed with the Sunrise team’s professionalism, said Forest Park Economic Development Director Paul Brehm.

“It provides a regional health resource that’s needed for the Greater Cincinnati region,” Brehm said. “I think we recognize that.”

The city viewed the Sunrise project like any other from the start, Brehm said. The Northland Boulevard corridor has been targeted for redevelopment, and Sunrise’s presence is a good fit, he said.

When asked if Sunrise’s presence has caused problems for the neighborhood, Brehm didn’t wait for the end of the question to answer.

“Not at all,” he said. “We have had no issues whatsoever at the facility.”

Sunrise’s Bridgetown facility can treat just more than 300 people. Though it’s partially staffed now, its Forest Park location will be able to treat as many as 500 when it’s fully staffed, Bill said. He knows that’s not enough to address the entire city’s needs, but it’s a start.

“We’re proud of what we’re doing here,” Bill said. “We think that we’re providing a good service and a needed service in the community.”