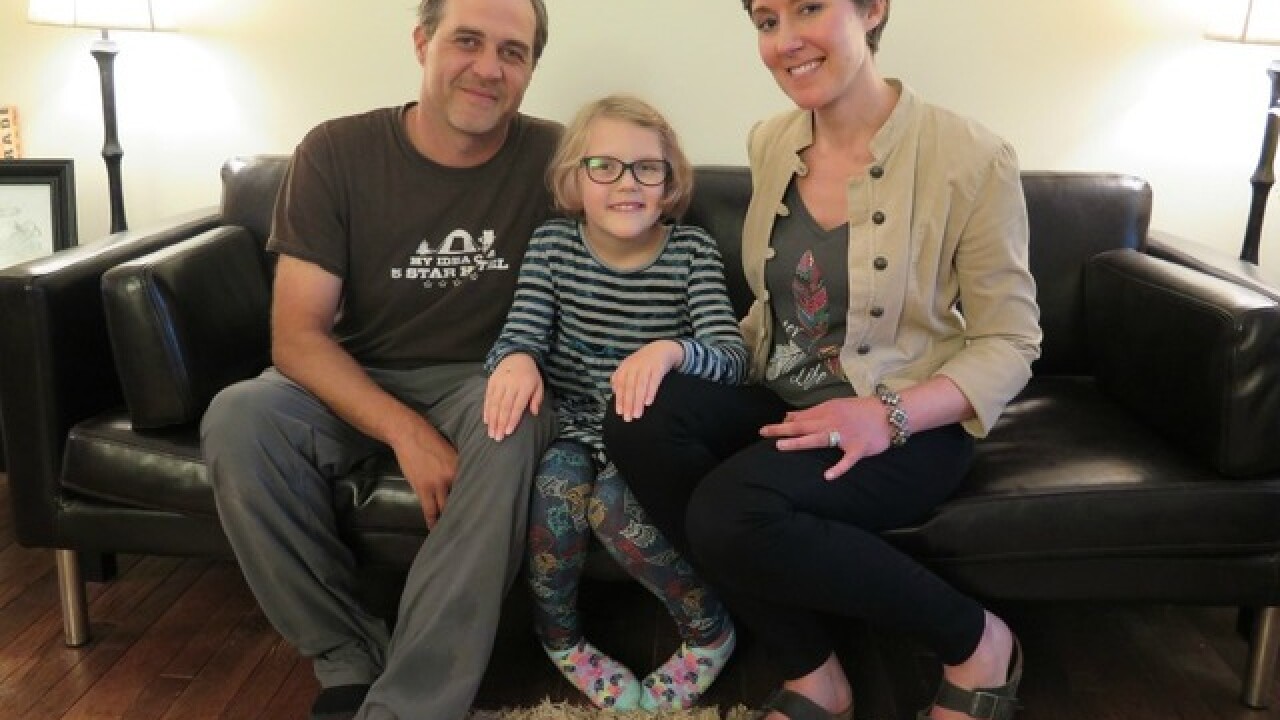 Copyright 2017 Scripps Media, Inc. All rights reserved. This material may not be published, broadcast, rewritten, or redistributed.
Lucy May | WCPO
<p>From left, Andy, Adelaide and Jen Koenig in the living room of their Alexandria, Ky., home.</p> 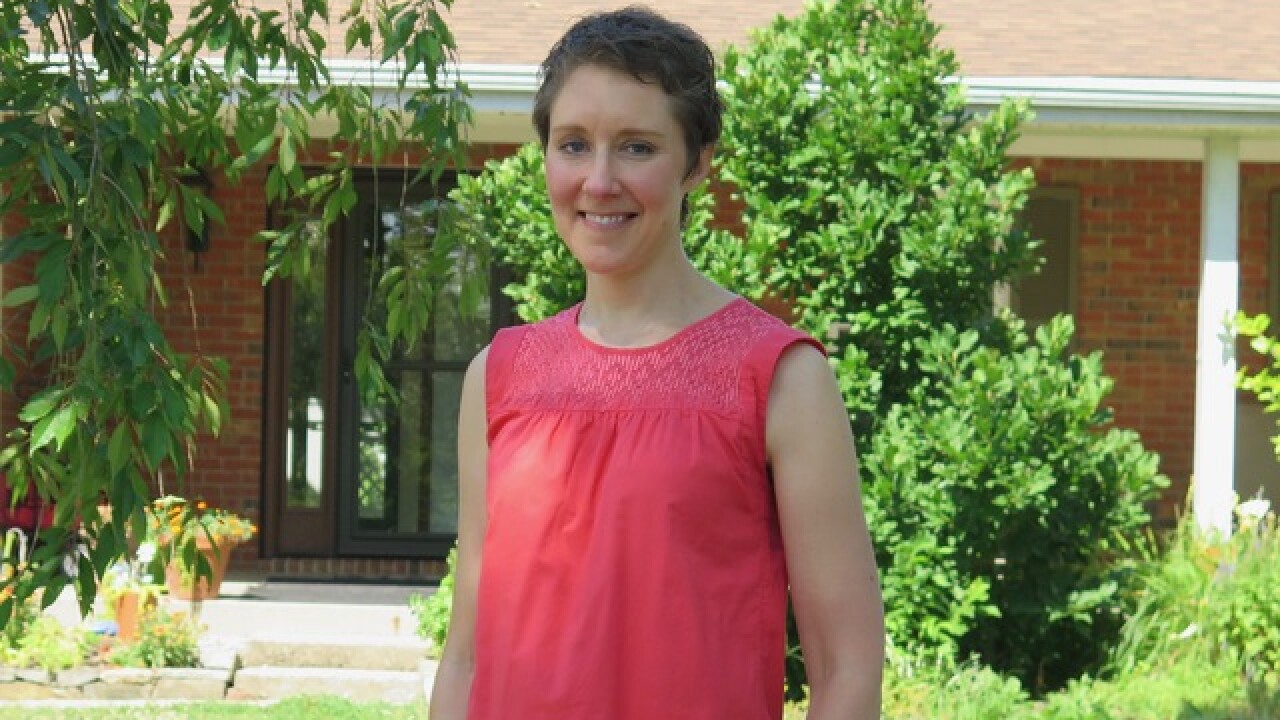 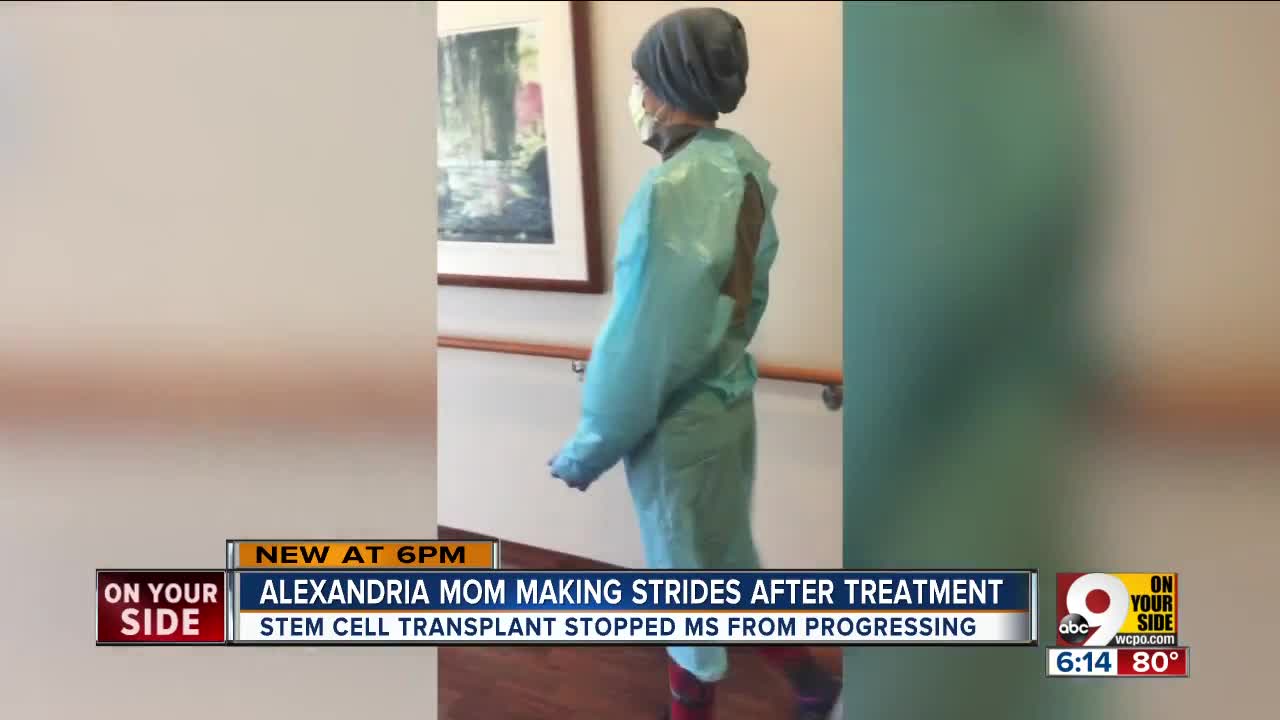 ALEXANDRIA, Ky. -- Jen Stansbury Koenig can do laundry again. She can shop for groceries and clean her house and even take a few steps backwards without falling.

None of those things are a big deal for most people. But they are huge for Koenig, who couldn’t do any of them this time last year.

“I haven’t fallen down for two months,” she said, smiling. “Before I was falling down at least once a week if not two or three times.”

“Before” was prior to October of 2017, when Koenig underwent an innovative stem cell transplant in Chicago to treat her advancing Multiple Sclerosis. The goal was to use Koenig’s own stem cells to help her body grow a new immune system and stop the progression of the disease that was stealing her mobility and limiting her life. The procedure appears to have done exactly that.

At her six-month checkup, Dr. Richard Burt of Northwestern University Memorial Hospital told her that her MRIs showed no new signs of lesions on her back or spine.

“I’m on track,” she said. “They don’t promise anything with the transplant other than halting the disease. We’ve halted the disease.”

RELATED: Last chance: A mom fights to get her life back

Koenig has such renewed energy that she has launched the HSCT Warriors Podcast to focus on the stories of people who have had the same kind of transplant that she had, called a hematopoietic stem cell transplant, or HSCT.

“It’s such an intimidating process. You have the risk of death with this – as you do with medications. What sets transplant apart is that people just don’t know enough about it,” she said. “I want to help inspire people to seek the treatment they deserve.”

But the news isn’t all good.

Koenig has plenty of work ahead to try to regain some of the mobility she lost in recent years. And she still is fighting her insurance company, trying to get coverage for the treatment that has changed her life.

Koenig is insured through her husband’s employer, Northern Kentucky University. NKU contracts with Humana as its health insurance plan administrator.

As Koenig understands it, Humana would have covered her treatment if she had been part of a clinical trial that Burt was conducting. But by the time Koenig connected with Burt, he was not accepting patients for the clinical trial anymore. He treated her using all the same protocols on a “compassionate care” basis.

Koenig’s friends and family members raised $15,000 to help pay for the treatment’s $125,000 down payment. And the family has had fundraisers to help with the expenses, too.

Koenig has hired a lawyer to work through Humana’s various appeals processes. Phil Fairbanks, a partner at Mehr, Fairbanks & Peterson in Lexington, Kentucky, began representing her earlier this year.

“That’s what makes a lot of these health benefit claims very difficult for the person who is not getting their claims paid,” Fairbanks said. “Regardless of how it comes out, even if it’s entirely decided for Jen, she may not be made whole.”

Koenig can’t dwell on that, though.

She is focusing her increased energy on making the most of her time with her 7-year-old daughter, Adelaide, and regaining some of the mobility that MS had taken from her.

“I’m trying to repair the old damage,” she said. “But I don’t have anything new. To know that it’s not getting worse is a tremendous feeling.”

Koenig gets physical therapy at Premier Physical Therapy Services in Evendale each week to improve her tone so that she can walk better and increase her confidence and stamina.

Matt DeLange, a physical therapist at Premier, said he has seen a marked improvement in her walking and balance and her ability to catch herself before she falls. Part of that progress, he said, stems from Koenig’s work at home to practice the exercises she does at her appointments each week.

“She’s an incredibly hard worker,” DeLange said. “There’s a very clear difference in the people that do stuff at home and those that don’t, and you can tell with Jen that she’s doing stuff at home.”

Shaffer was the doctor that first realized the drugs Koenig was taking for MS were making her worse instead of better. She helped Koenig figure out that she had Lyme disease, which was a crucial part of her treatment. And recently, Shaffer ran tests and found high levels of heavy metals in Koenig’s system, which they are working to reduce.

“She seems to have a little bit more energy,” Shaffer said. “I would like to see her motor function get a lot better.”

That’s what Koenig wants, too. She wants to be able to go to the zoo with her husband, Andy, and their daughter, Adelaide, and walk around without getting too tired.

Koenig got a bike for her 40th birthday in April and wants to learn to ride all over again at the same time Adelaide learns to ride a bike.

“I got my helmet, and I got some fancy elbow pads and knee pads,” Koenig said. “I successfully walked on my bike and pedaled a few times, but it wasn’t anything significant yet.”

She is confident she will get there, and her husband is, too.

“I’m happy each day that she wants to try new things to keep getting better,” Andy Koenig said. “I think that’s what inspires me. That determination that she has to work.”

Thanks to the stem cell transplant she had in October, Koenig is working harder than ever.

More information about Koenig’s own journey and how to donate is available in her blog online. Episode 00 and 01 of her new HSCT Warriors Podcast are available now.