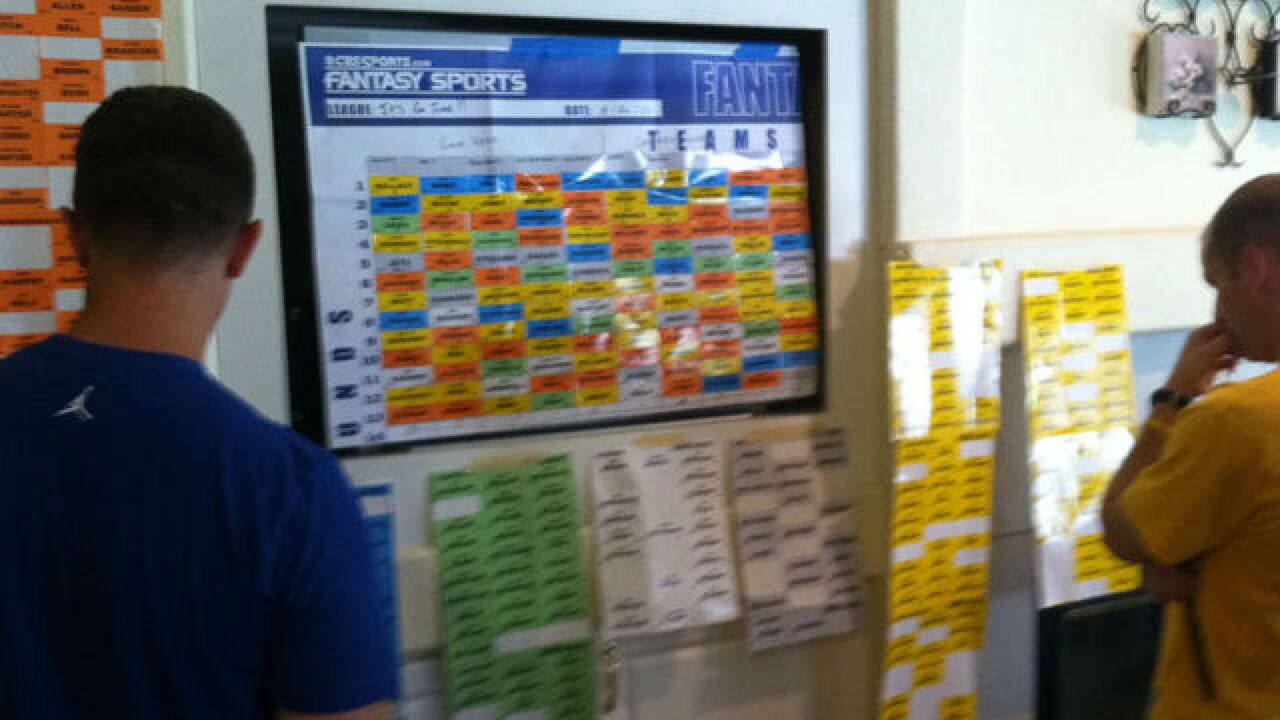 CINCINNATI -- So you’re gonna be in a fantasy football draft this weekend. If everybody doesn’t know that now, they will on Monday morning as you regale your co-workers with how you stole Antonio Brown with the seventh pick in the first round. Yes, it’s that time of year when we not only gear up for another football season, we also rev up for the ultimate water cooler talk topic -- fantasy football.

Outsiders still consider it Dungeons and Dragons for sports nuts, but the truth is, a lot more people play than just hardcore stat geeks and gamblers. Much like the irresistible draw of an NCAA basketball tournament bracket sheet, few can resist the chance to assemble a team that will make them feel like a real NFL expert. Sure, it crashes and burns for most in the end, but in late August, fantasy hope springs eternal.

The following is some advice as you head into your big draft weekend. But this isn’t a list of draft strategies and sleepers (if you want one though, try the Saints’ Michael Thomas. You’re welcome.). This is a reality check to make sure you’re not “that person” when it comes to fantasy.

Regardless of the truth, you will finish your draft believing you have assembled the greatest imaginary football team ever. And you should because it’s the time to be a believer. However, please know that no one cares about your team other than you and maybe people in your league.

If you find yourself giving a round-by-round breakdown to Gladys while she waits on the photocopier, know that she’s tuned you out and is thinking about lunch or anything other than what you're saying. She is not as amazed as you are with how you managed to get Odell Beckham Jr. AND Dez Bryant, even if she’s too polite to walk away.

Also, know your audience. Many people aren’t into fantasy sports or sports in general. If you’re talking to someone whose idea of a good time is riding a tandem bike and likes to sample craft aioli at the artisan mayonnaise shop, they probably won’t know what you should do with your flex position. Maybe talk beards with them, you can relate with that.

You can talk smack to your fellow league members and brag about who you have to them because that’s part of the fun, but understand this very clearly: No one else cares.

No one likes a multi-leaguer

Much like boasting about how your draft went, during the season if you ever start a sentence with, “In my other league…” you need to just stop. This is behavior that will alienate even your fellow league members. If you must be in other leagues, don’t let those worlds collide.

If you’re in multiple leagues, you can very easily be perceived as a hedge-bettor. You’ve spread your luck over several options in hopes that at least one will work out. If one does, that’s the only one any of us will ever hear about. You’re as bad as the person with 10 NCAA tournament brackets -- yes, we know you picked Middle Tennessee State to upset Michigan State, but you don’t mention that nine other times you didn’t.

Ideally, you should be in one league, but if you must join your work league in addition to the one with your college buddies and the one with the couples in your neighborhood and one your family does, just live multiple realities and don’t blur those lines.

Don’t be a quitter

Again, draft time is one of great hope, but when by week 3 your quarterback is injured, your running back has been suspended and your receiver is benched for not getting along with the coach, please soldier on. You’ve made a commitment and you must fulfill it.

When a league ends up with a bunch of quitters, it totally ruins it for those who want to enjoy it and in the end, they will hate you for it. They will hate you even more when your team fields only four players and still somehow beats them in the first round of the playoffs.

It might be tedious for you, but suck it up, put down that artisan aioli and set a dang lineup each week. It’s just not that difficult. If you can’t make that commitment, then please opt out of your draft now. Do the right thing. Do it.

It’s exciting when you are invited to be in a league -- like being asked to go to the prom or being given a free trip to an all-you-can-eat Brazilian steakhouse. But much as you wouldn’t go into Boi Na Braza not understanding how to give the red light and green light on more meat, you shouldn’t go into a draft unprepared.

Even with that advice there will be plenty of people who go in without knowing Peyton Manning retired, who will take Adrian Peterson five rounds after he’s already been selected, who will shuffle through cheat sheets on their iPhone in a panic after their list of 20 players is off the board by round three.

Not only will you draw the ire of your fellow league members, you will also become the Taco of your league (if you haven’t seen the TV show The League, that won’t make any sense, but it’s true). You’ll get no respect and your buffoonery will never be forgotten.

The only upside is if you somehow beat people, and you probably will since fantasy football is 90 percent luck, you will drive others nuts, especially that league member who takes it way too seriously. If you get satisfaction in knowing that person is chucking remote controls around their living room on Sundays, then being the Taco might be for you, but it’s still not advised.

People inevitably fall into categories in their drafts, following patterns that oftentimes doom their chances. If you’re any of these, look at yourself in the mirror and think about making some changes:

Live by this advice and both your draft and your season will be a good experience -- for you and everyone you know. Fantasy football should be fun, so keep it that way.