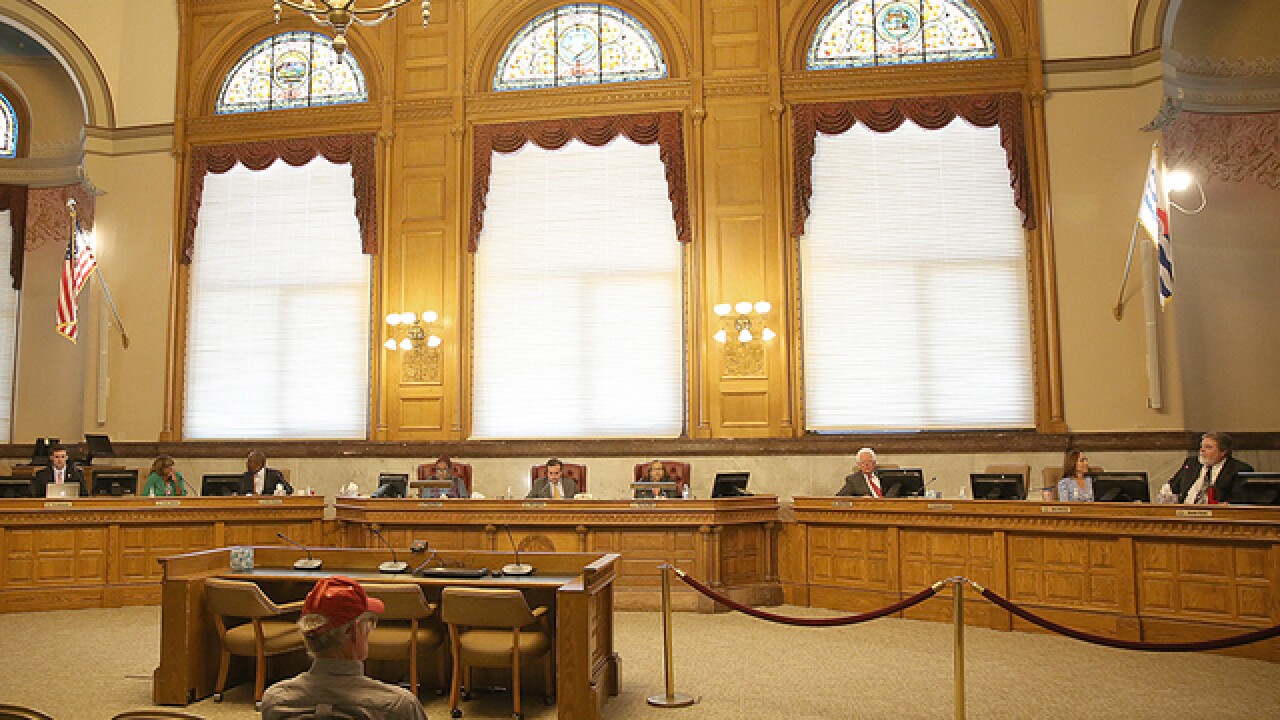 CINCINNATI -- Two Cincinnati City Council members, who are both running for re-election, have skipped as much as 10 percent of council meetings over their term.

Yet only one council member – Kevin Flynn -- has shown up for every meeting over the last four years.

Flynn, a Charterite who is not seeking re-election, has been present for all 179 council meetings since December 2013, when the nine members were sworn in for their four-year term.

“I take it seriously,” Flynn said in an interview with WCPO Friday. “In the private sector, you have a job you’re expected to show up for. It’s not acceptable, even if you’re sick. If it’s an important meeting, you show up for it.”

As this council’s term comes to a close, WCPO reviewed the attendance record, as of last week, for all nine City Council members. Those elected to council are paid $65,700 every year for their work.
Cincinnati City Councilmen P.G. Sittenfeld and Chris Seelbach have missed the most – 18 meetings – during the last four years.

“How can you miss 10 percent of your job?” Flynn said of his fellow council members’ absences. “Especially when you get the month of July off and the month of August off. We’re off in September until Labor Day. We usually take one week off at Christmas.”

Absenteeism has become a topic at council in recent weeks, after a decision on a controversial zoning change for Cincinnati Children’s Medical Center was delayed in August because not enough council members were on hand to vote on the $550 million expansion project. Three council members were not present for that vote, which was rescheduled for the following week.

Councilman Charlie Winburn, who has missed six meetings, ticked off the attendance records during the rescheduled meeting.

“I love Mr. Winburn, but there’s no way I missed 17 meetings,” Seelbach said at the time of that August meeting. “I think maybe four in the last four years.”

“Chris is proud to have passed the most legislation of any current council member,” Seelbach’s Chief of Staff Jon Harmon wrote in an email this week.

Seelbach missed several weeks of meetings caring for his mother, who suffered a life-threatening illness, in a Louisville hospital, Harmon added.

“Family came first, and the mayor and council were all supportive of Chris and his family during that challenging period,” Harmon wrote.

Meanwhile, Sittenfeld said a trip to the White House and his honeymoon were among the events that kept him out of council chambers.

“I’m very proud that I’ve worked tirelessly on behalf of my constituents to improve our city,” Sittenfeld wrote in an email. “The majority of council members, myself included, have missed a handful of meetings each year ... for reasons ranging from personal health issues to family medical situations to things like, in my case, going on my honeymoon right after getting married and being invited to the White House for my efforts on sexual assault prevention.”

Council typically meets once a week, on Wednesdays, from September through May. Any two council members can call an unscheduled “special meeting” of council to discuss an issue or vote on an urgent matter.

There are eight city committees, from Law and Public Safety to Budget and Finance, that council members serve on to take a deeper look at issues in the community. Each council member is required to serve on at least three committees, and some serve on more.

There have been times committee meetings were too sparsely attended to have quorum to vote. A few times, Flynn said he was forced to cast a vote on motions – when he would have preferred to abstain – simply to allow the item to move forward to the council floor.

“Our job, in large part, is to participate in thoughtful discussion, question the administration, listen to people in committee and council meetings,” Flynn said.

Young, who serves on more committees than any other council member, has missed 68 of those meetings.

He suffered a life-threatening heart emergency in September and was in the hospital recovering from surgery for weeks. That’s left Young sidelined from more than a month’s worth of meetings.

Meanwhile, Simpson – who is also running for mayor – has missed 41 committee meetings over the last four years.

Most of those absences stemmed from the Law and Public Safety committee, where Simpson has missed over 19 meetings.

“Her absence from meetings are largely due to work commitments, dealing with personal or family illness or advocating for passage legislation at the Ohio Statehouse,” said Andria Carter, the communications director for Simpson. “Working on behalf of the citizens of Cincinnati is a job she takes very seriously.”

Mayor John Cranley, who is running for re-election against Simpson, has missed eight council meetings in the last four years. The city’s mayor doesn’t serve on committees.