Deadline to participate is June 30 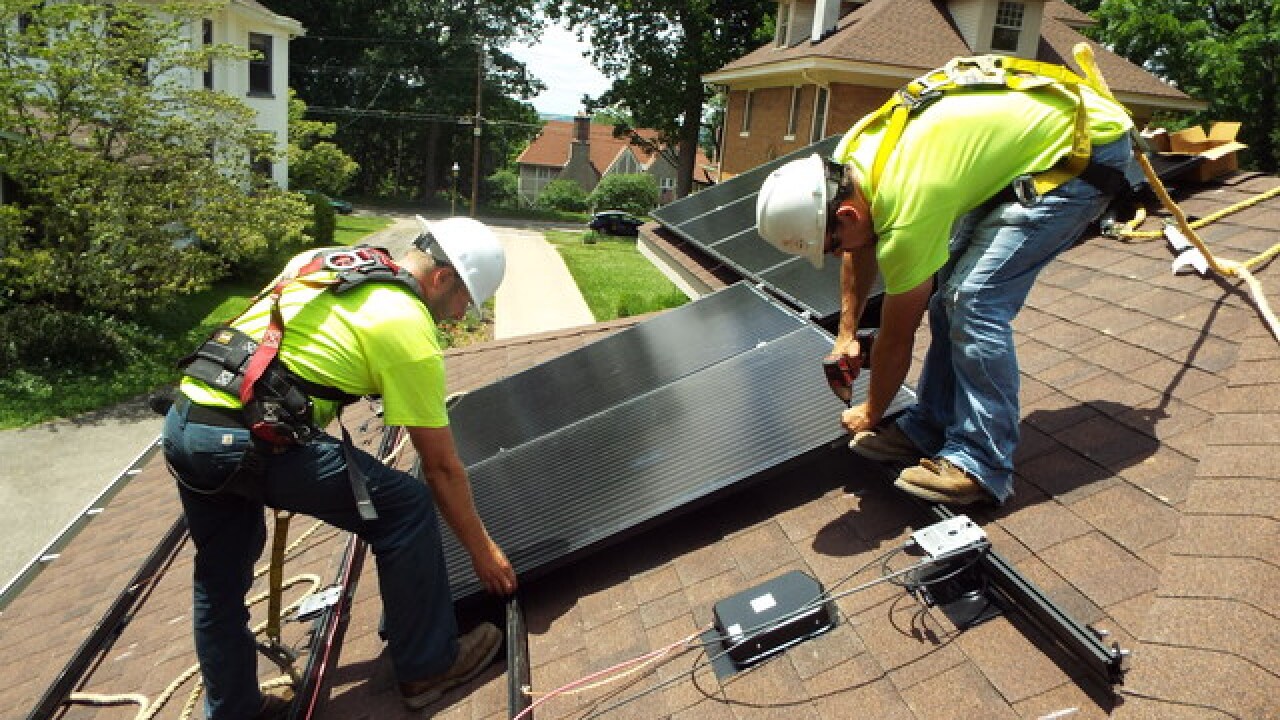 Copyright 2017 Scripps Media, Inc. All rights reserved. This material may not be published, broadcast, rewritten, or redistributed.
<p>Installers Andy Young, left, and Chance Fox work on putting solar panels on a roof in Pleasant Ridge on Thursday as part of Solarize Cincy, a program to make it cheaper to go solar. (Provided/Bill and Julie Lonneman)</p> 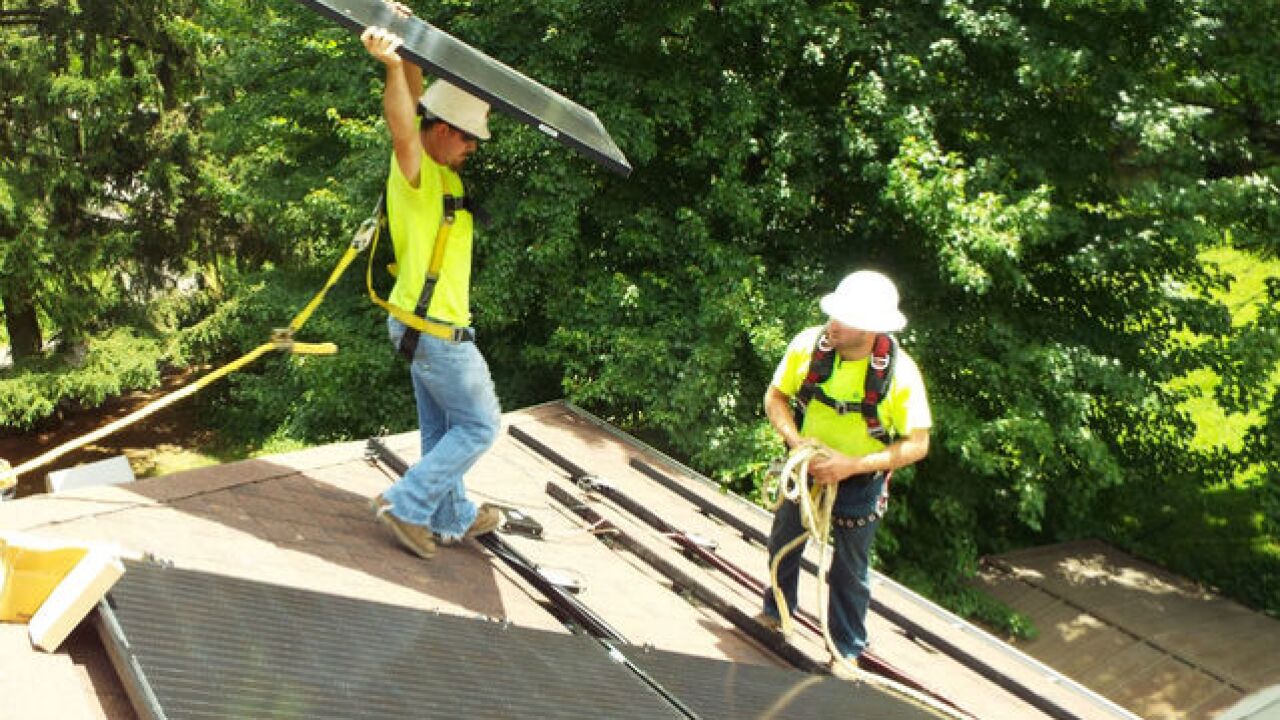 CINCINNATI -- You’d like to go green and harness the power of the sun to provide your home’s electricity, but you’re worried about the cost.

Help’s available for that, but the deadline to apply for it is fast approaching.

The help comes from the city of Cincinnati’s Solarize Cincy program, which the city pays the Greater Cincinnati Energy Alliance to administer.

It’s designed to make installing solar panels on your home more affordable, and it’s available to anyone in the Tri-state region, not just Cincinnati residents. But to guarantee the low pricing, you have to complete the application process by June 30.

To make it even more time-sensitive, there’s no guarantee that there will be money in the budget for the program for next fiscal year, which begins July 1, said Michael Forrester, who manages the program for the city.

WCPO.com reported earlier this year that the city faces a $25 million shortfall in its budget for the fiscal year that begins July 1.

Solarize Cincy has been around for just two years but seems to be doing its job of encouraging more solar installations in the region. Forty-seven installations were made through the program last year in the city and three outside the city, Forrester said.

That amounted to an 81 percent increase over the number of installations made the previous year, Forrester said. More residential installations were made in Hamilton County than in any other county in Ohio, he added.

This year so far, 783 residents have received a free solar assessment and 122 have asked to meet with an installer. The numbers in 2016 were boosted with help from a social media and traditional media campaign created by Robeson Marketing and Design and conducted in the spring of 2016.

The campaign included educating people about how the cost of solar has come down by about 73 percent in the past 10 years, principal Beth Robeson said.

Among those who responded to the ad campaign were Bill and Julie Lonneman, who had 14 solar panels installed on the roof of their College Hill home last spring. They had often thought about going solar, Bill Lonneman said, but didn’t think they could afford it.

But the discount from Solarize Cincy and a federal tax credit lowered the total cost to about $10,000. They were able to borrow the money at a very low interest rate through Ohio’s Eco-Link program.

Bill Lonneman said they now pay only a small service charge for their electricity. “We really don’t have a monthly electric bill,” he said.

The Solarize Cincy program uses buying power of neighbors to help lower costs. It works this way: Participants first visit www.solarizecincy.org, where they sign up for a free, virtual rooftop assessment using an online solar mapping tool. This gives them an idea of whether their roof’s suited for solar panels, and a rough idea of the cost.
If the homeowner likes the numbers in the assessment, they get a site-specific estimate from a contractors approved by Solarize Cincy. These contractors were selected via competitive bidding in February.

The buying power of Solarize Cincy enables the contractors to reduce their prices by about 20 percent and pass the savings on to customers, Forrester said.

A typical, 4.5-kilowatt system costs $12,870 when purchased through Solarize Cincy. After the homeowner receives the federal tax credit of $3,861 available for that installation, the net cost is $9,009.

In March, for the first time ever, solar and wind power accounted for more than 10 percent of power generation in the United States. Ten years ago, it was less than 1 percent.

Rigler believes the election of Donald Trump as president has prompted a lot of people who might have been considering solar to go ahead with it. They’re afraid his election could mean the end of the tax credit, Rigler said, but also, they want to make a statement about solar power.

Third Sun Solar finished installing an array of a dozen solar panels for a homeowner in Pleasant Ridge this month. Rigler estimated that including the tax credit and the Solarize Cincy discount, that system would pay for its $14,000 cost, in lower electric bills, within nine years.

“It doesn’t matter whether you get (solar) or not, you’re going to be paying for the electricity,” Rigler said. “You’re making a decision to lower your costs, increase your property values and, all the while, do something very positive for the environment.”

The latter is one reason Chris Heckman plans to have a large array of 36 panels installed on the home he’s renovating in Over-the-Rhine. He’s a volunteer with the local chapter of the Citizens Climate Lobby.

He said he'd like to see the city expand the program to cover costs of home energy storage units like the Powerwall by Tesla.

He plans to hook one up to his array to store energy for his home use. He expects that the battery will save an additional 25 percent on the cost of the home’s electric bill.

“I’m really happy the city has this program to help resident who want to reduce their carbon emissions,” he said.

The program also appears to have the support of Cincinnati Mayor John Cranley, whom Robeson said had called it “good for the environment and good for your pocketbook.”