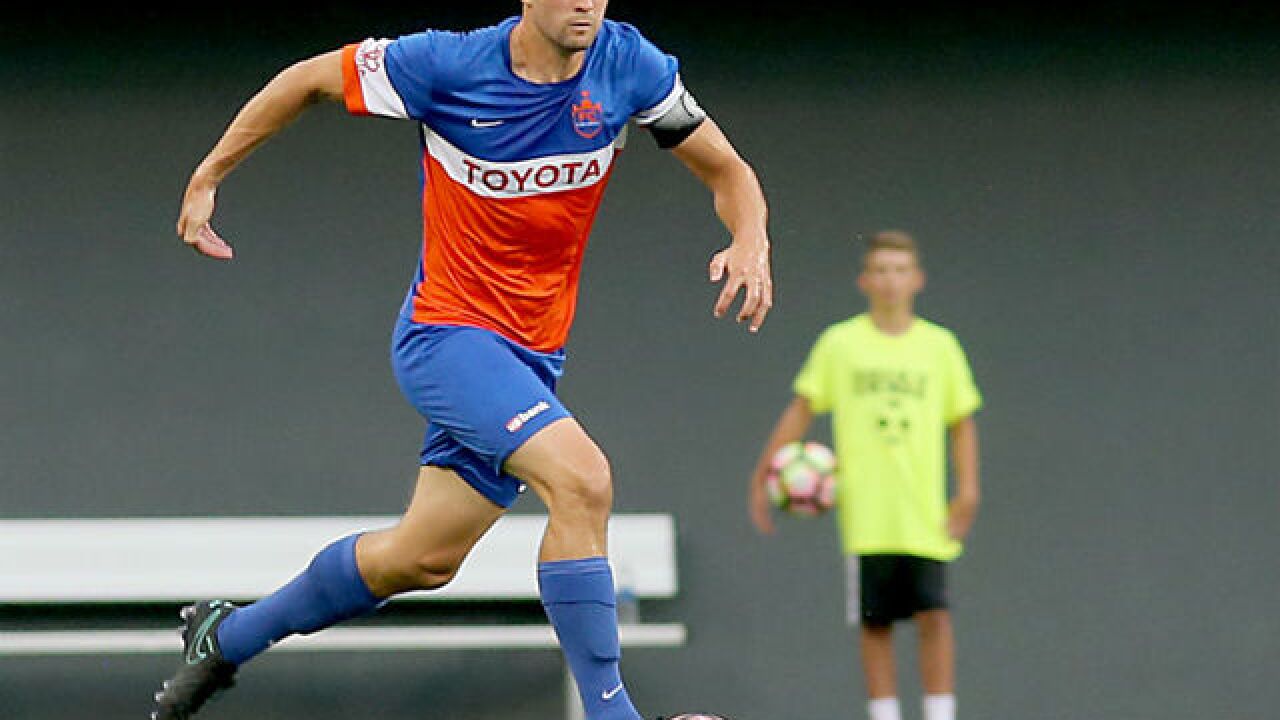 Copyright 2017 Scripps Media, Inc. All rights reserved. This material may not be published, broadcast, rewritten, or redistributed.
E.L. Hubbard | WCPO contributor
<p>FC Cincinnati defender Austin Berry moves the ball against the Harrisburg City Islanders during their game at Nippert Stadium in Cincinnati on July 22, 2017. Berry is now the strength and conditioning coach for FC Cincinnati.</p>

When the Chicago Fire selected the Cincinnati Summit Country Day School graduate ninth overall in the 2012 MLS SuperDraft, he walked up to the stage, caught his foot on the last step and tripped as he headed toward league commissioner Don Garber for a handshake and introduction.

Both he and Garber laughed it off, but at the time, Berry -- now the strength and conditioning coach for FC Cincinnati -- could never have imagined that one day the two would be back in the same room at a brewery in his hometown as MLS was welcoming Cincinnati to its ranks.

Berry didn't get a chance to speak to Garber on Tuesday during the special event at Rhinegeist to announce FC Cincinnati as MLS' 26th team, but his parents made sure to remind him of the last time he saw Garber on a stage.

"I had to have my mom bring my suit," Berry recalled when asked about his draft experience. "We were at the combine and as we went through the combine my agent told me that, 'Hey, you're probably going to get picked pretty high, or at least in the first round. They want to invite you to the draft.' So I had to have her fly in a suit that I didn't have any time to try on. I probably had one, but not one that fit, so she had to go buy a suit, bring it in and buy shoes, and I blame it on the shoes.

"I remember the Portland Timbers were eighth, and I have a lot of family there, and when it wasn't them and Chicago came up, I remember having a lot of good conversations. I had played PDL there, so when they came up, I leaned to my dad like, 'Hey, I think this is it.' I went up, caught the last step and did a thing, and me and Garber had a little, 'Ew, that could have been a bad start.' But that was a fun start."

It won't be long before Garber will be shaking the hands of FC Cincinnati's first draftees in January ahead of the club's inaugural MLS season.

Soccer has come far in this city since Berry, 29, was a kid.

"You couldn't find a soccer game on TV in Cincinnati," Berry said. "My dad never wanted to pay for, what was it, FOX Soccer channel back in the day. After a while, I had to ask him for FOX Soccer channel. I always knew there was so many kids that played club, the club scene was huge here, which we've talked about plenty over the past couple years. So you knew there was a following, but once FCC started, they had a team they could attach to it. That's been awesome for the youth in the city to have something to look up to and then see what the next level looks like."

Berry came back to Cincinnati three years ago to be a part of building something special in his hometown. After stints with the MLS Fire and Philadelphia Union, he wound up playing in South Korea and received an opportunity to return home as FC Cincinnati's first player.

By signing a contract in December 2015, he chose to believe in club president and general manager Jeff Berding's ambitious dreams to bring soccer to the highest level in Cincinnati.

"He talked about Bob Johnson and how everyone remembers him as the first Bengal, and he said I had that kind of opportunity," Berry said. "All those conversations at 3 a.m. in South Korea, with him and Harkesy (former coach John Harkes) at the time, it was some of that, and just being the cornerstone of the building blocks from the beginning. That sold me, but as I learned more and more about the club, it was almost a no-brainer to come back."

When Berry first heard about the new club, his initial reaction was that it would be a good city for the USL. But as more details emerged -- the fact that Carl Lindner III was the majority owner and the team was bringing in former U.S. Men's National Team captain John Harkes as coach -- it became more legit.

Berry said he "just had to be part of it," despite the knowledge that past attempts for professional soccer never really caught on with the fan base.

"I remember the Cincinnati Silverbacks (indoor team), … but I knew it was completely different, not just in soccer but a completely different city from when I was growing up and in those kind of times," Berry said. "I knew there was always club soccer, but nothing could have prepared us for what it is now. To have a day like (Tuesday), that was always in the back of everyone's minds. That was what we were talking about, what we were playing for, but to this day, every home game just gets bigger and bigger and it just keeps surprising you."

Berry scored a goal in the club's inaugural home game, a 2-1 win over Charlotte in front of 14,658 fans, and the memorable moments quickly piled up.

"Just when you think, 'Wow. This is the pinnacle,' " Berry said, "then you play Crystal Palace (in front of 35,000 fans), then we had that crowd in the playoffs -- granted we lost -- and then you go into the next season and it's every Open Cup game, every game. It just keeps getting bigger and bigger, and I'm excited for the rest of this season and the future."

After two seasons as a starting center back and captain, Berry decided to retire from his playing career during the offseason and joined the technical staff as a strength and conditioning coach.

Berry said he knew from the beginning he wanted to remain in Cincinnati long term, and knowing his MLS playing days were likely behind him, it seemed the right time this offseason to make the transition to a seemingly more stable job.

His role likely will evolve with the club's promotion to MLS, but he looks forward to being a part of the transition, just as he did in building up the USL team from the bottom.

"Anytime you go up a level, it's the speed of play and the ramifications and decision-making, because you can get away with a couple mistakes maybe in the USL and the lower leagues and guys won't put it away," Berry said.

The margin of error is thinner in MLS, he said.

"There are guys with the quality at the next level that if you give them a half-inch, they are going to put the ball away. That's what people will see once this comes up to MLS, just that final-third quality, how much quicker it is and much more athletic, but I tell you what, USL has really gotten a lot better. Those were some of our harder games playing in Chicago and Philly, having to play those lower-division teams in the Open Cup because the quality is still here and the gap is closing, but I think both leagues keep rising."

And Cincinnati is rising with them.