Slathered in gravy or stuffed with barbecue, these are the Top 9 tastiest biscuits in the Tri-State 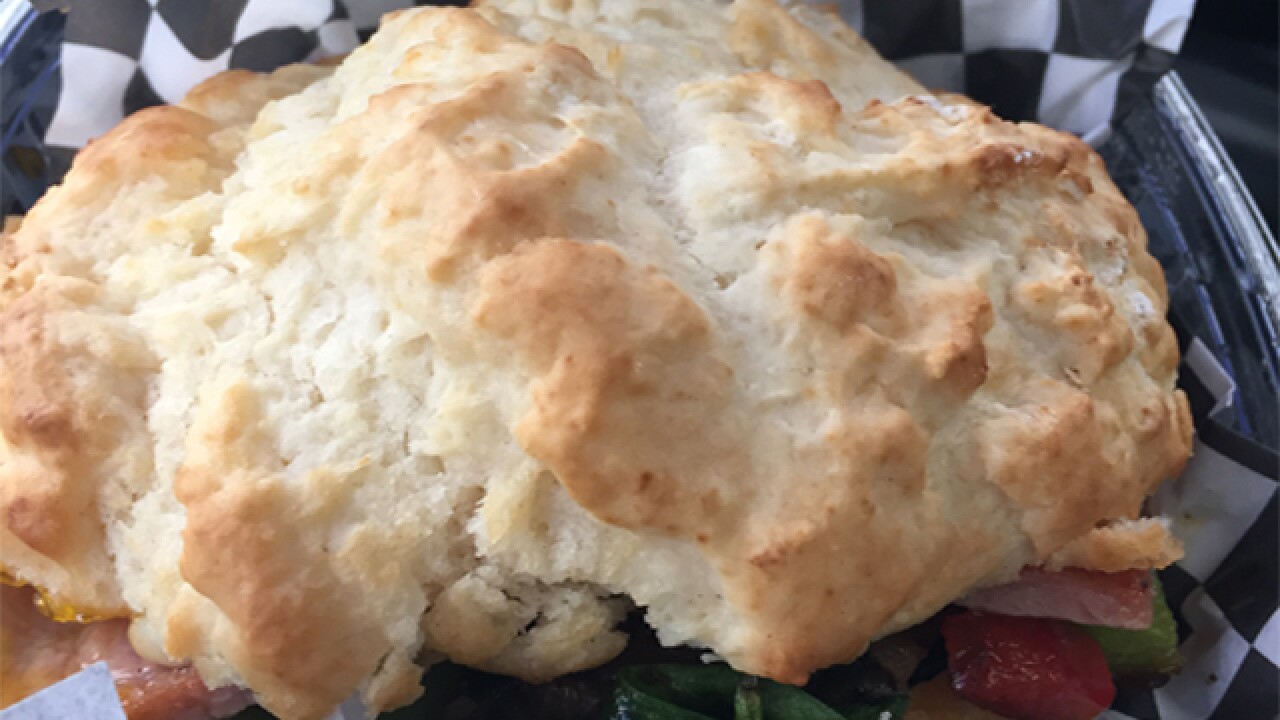 Copyright 2018 Scripps Media, Inc. All rights reserved. This material may not be published, broadcast, rewritten, or redistributed.
Provided
<p>Homemade biscuits are enjoying a renewed culinary popularity.</p>

Although homemade biscuits have been gracing many a Southern Sunday dinner table for generations, they also appear to be enjoying a renewed culinary moment.

Bright-eyed young chefs looking to chase the carbohydrate du jour all the way to the bank have stiff competition from the well-seasoned comfort-food contingent, especially in Northern Kentucky.

In an effort to assess the situation, I pulled on a pair of trusty elastic-waist pants and set to evaluating.

Here are my Top 9 places to get good biscuits.

If the late Edna Lewis and Jacques Pepin had birthed a culinary love child, this would have been it . Chef and owner David Willocks has reinvented an American buttermilk biscuit by utilizing the French technique of lamination. A croissant comprises many tender layers because its preparation includes folding the dough in multiple directions multiple times. Willocks' generously-sized square biscuit benefits from the same technique and yields a similar, delicate structure. This was far and away my favorite biscuit that I tasted.

Did I mention that I bought it at a bookstore?

The Baker's Table sells wholesale to Roebling Point Books in Covington and occasionally from the Lil's Bagels window on Greenup Street. Watch for a permanent brick-and-mortar location later this year.

Zumwalde was inspired by the cuisines of Charleston, South Carolina, and New Orleans, not to mention an abiding love for bourbon, and he was serving biscuit sandwiches years before the Over-the-Rhine crowd managed to "stake their claim." His divine buttermilk biscuit with mascarpone and bourbon-peach-pepper jam somehow manages to feel both gluttonous and genteel in the same bite. 603 Sixth Ave., Dayton, Kentucky.

To be clear, it's a takeout stand inside a Kennedy Heights Marathon station. Upon entering, you can't help but feel slapped by the tussling odors of bargain-basement nag champa incense and Cajun-style fried chicken. It's carryout, so you'll willingly suffer the offending odor for a few more seconds than usual. Go for the chicken, the boudin bites and the jambalaya, but don't miss the sticky honey-butter biscuits. Unlike some of their buttermilk counterparts, Jay's cake-like biscuits reheat especially well for breakfast the next morning -- assuming there's any left. 5361 Kennedy Ave. Krispykrunchy.com

Four little words appear innocuously halfway down the brunch menu: lard biscuits + butcher's gravy. If whole animal butchery is your passion, just the thought of this dish will spark considerable food lust. It's all that and then some.

Nino Loreto and Joe Helm's butcher's gravy is made from up to four different kinds of scraps from their in-house butchery endeavors, and it's the ideal topping for their fluffy lard-based biscuit. Make the pilgrimage . Culinary sustainability never tasted so good. 1313-1315 Vine St., Over-the-Rhine.

When a restaurant sticks around for 85-plus years on an especially busy stretch of Dixie Highway, there is a reason. And while the buttermilk biscuits at this Northern Kentucky institution aren't the sole factor (the impossibly chipper service, the reasonable prices and the home-style pies are also hot contenders), they are damn good.

Order a side of biscuits to enjoy with your country-fried steak or get them drowned in sausage gravy. Pro tip: If you stop in later in the day, ask your waitress to bake a fresh batch and then leave her a killer cash tip. Trust me, she has already earned it. 3140 Dixie Highway, Erlanger.

In Appalachian cooking they call them cathead biscuits, because they're historically the size of them. B&A Street Kitchen easily serves the biggest, softest biscuit of this bunch and (I can't believe I'm admitting this) it was enough to fill me up for an entire day. Their enormous Running the Garden sandwich ($5) is filled with sauteed peppers and onions, avocado and spinach. I paid an extra dollar to add an egg. I'd like to nominate this biscuit sandwich as a delicious solution to ending global hunger. The World Bank can thank me later. 1500 Race St., Over-the-Rhine.

My deep tendre for this untouchable Hyde Park diner knows no bounds. Like an impossibly chic grandmother, The Echo won't waste her time chasing the latest craze. (There's not a sous vide steak or compressed watermelon salad in sight!) Yet she wouldn't be caught dead skimping on the quality of ingredients in her craveable Americana fare. The buttermilk breakfast biscuits are no exception. They pop up under sausage patties on the Country Boy Benedict and are often slathered with sausage gravy as an accompaniment to platters such as the Hot Mess, Bonnie's Bounty and the Lumberjack. 3510 Edwards Road, Hyde Park.

This is ground zero for what could be dubbed the hipster biscuit scene. The branding is overtly heavy-handed (perhaps in an effort to franchise?) but the young staff is gracious and poised, and the food shows real craft.

Celebrity chef Christian Gill is more than just a guy with great hair -- his lard-based biscuit boasts subtle umami notes that even the best cook can't quite achieve with butter or shortening. Order his Sutter's Mill biscuit sandwich, stuffed with braised barbecue short rib and an apple slaw. It brazenly nails the trinity of rich, smoky and sweet. 1201 Broadway St., Pendleton.

I didn't grow up eating homemade biscuits. For years, Cracker Barrel was my gold standard. The Barrel further nurtured our family's dining loyalty with highly addictive golf tee games meant to while away the wait time on busy Friday nights, and I spent a good deal of my grade school allowance on jawbreakers from the country-kitsch gift shop.

Now that my excess quarters are funneled into 401(k) and 529 plans, the rocking chairs are looking pretty sweet, too. For corporate, homemade-tasting, buttermilk biscuit consistency, Cracker Barrel can't be beat.