Single moms of Over-the-Rhine form support group to help themselves, their kids and their community 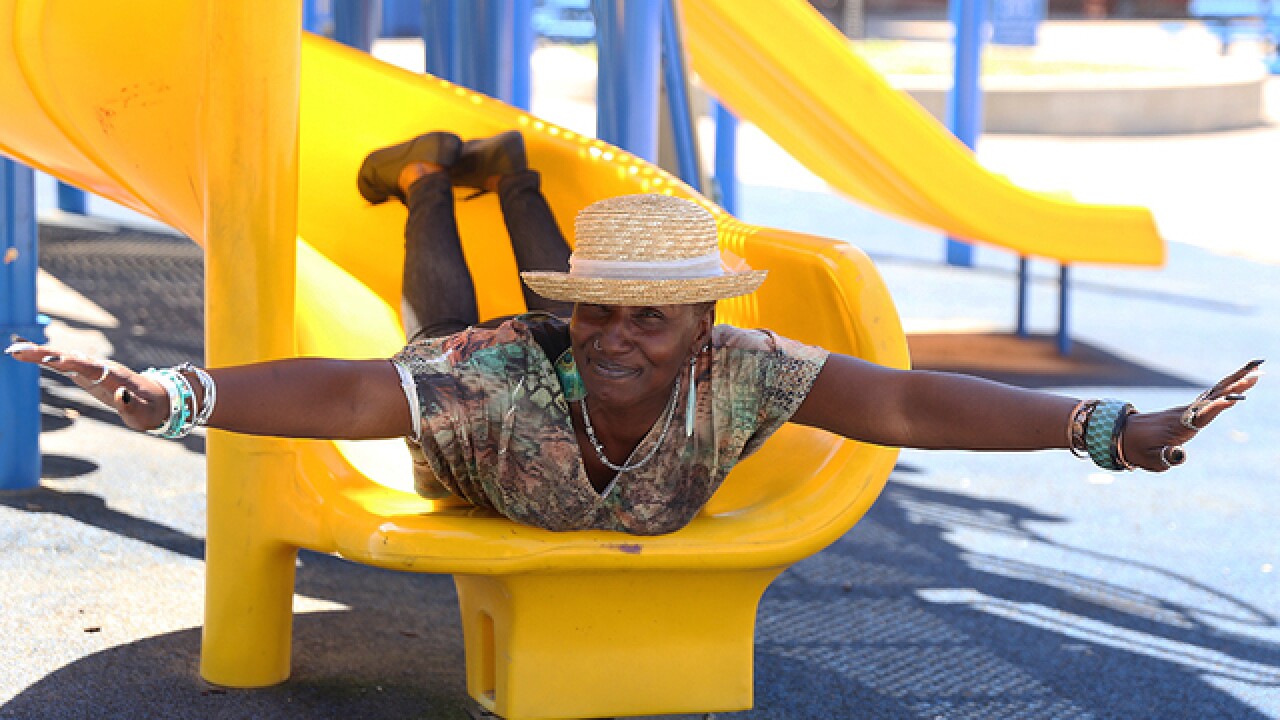 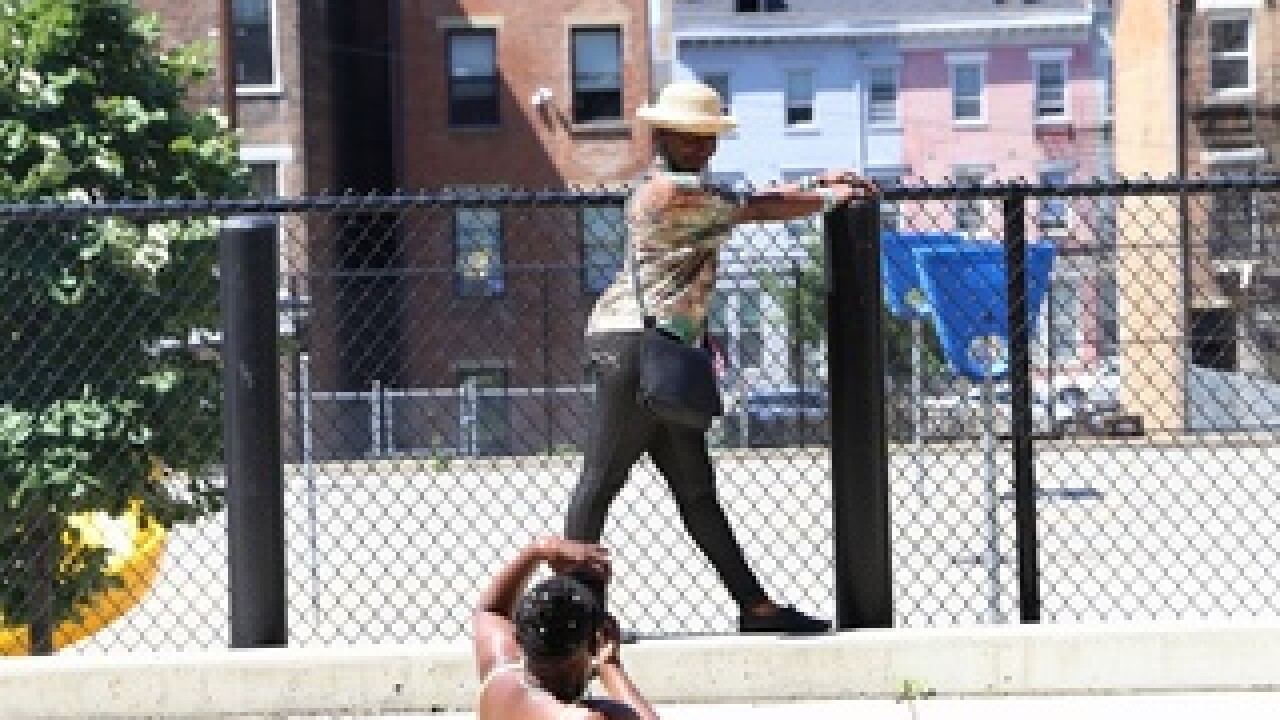 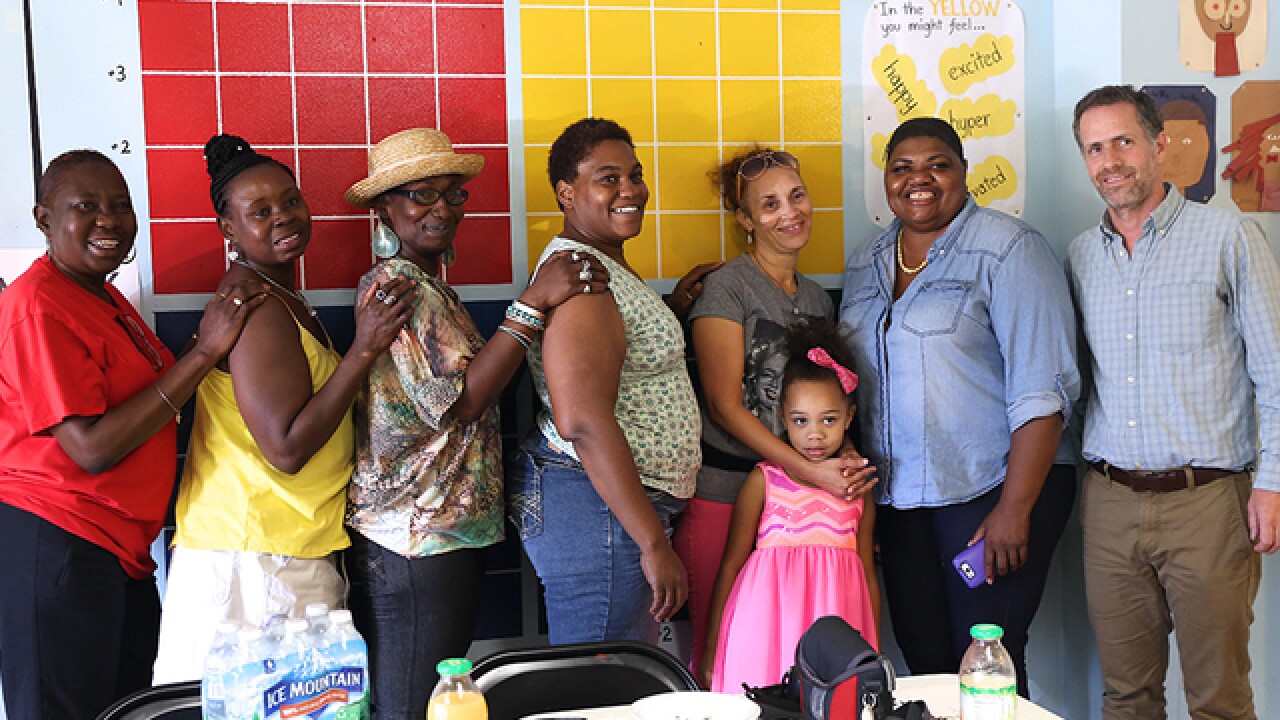 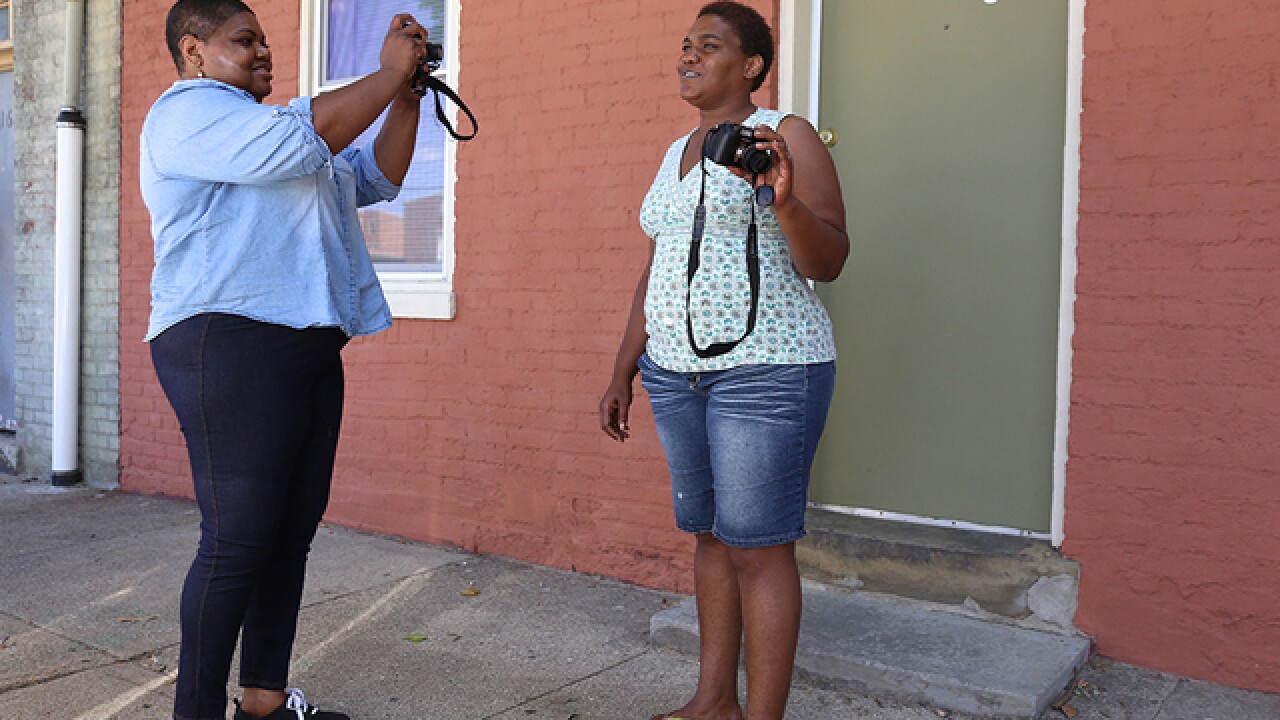 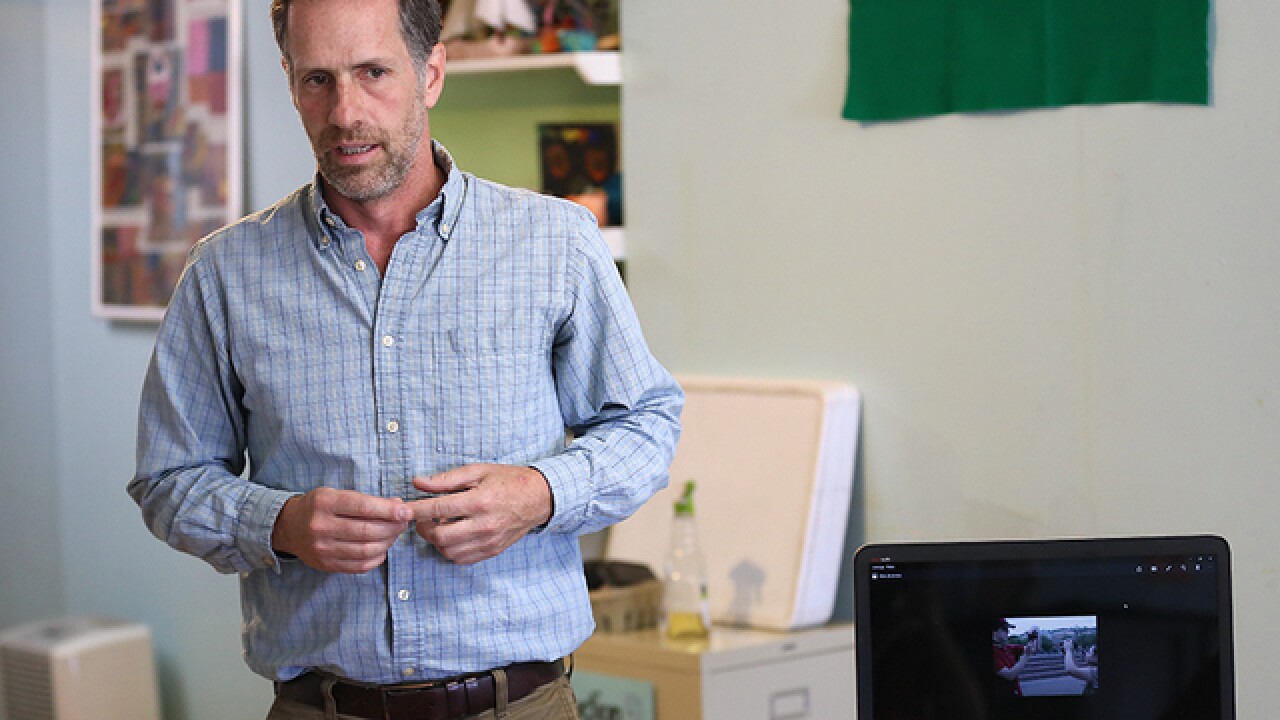 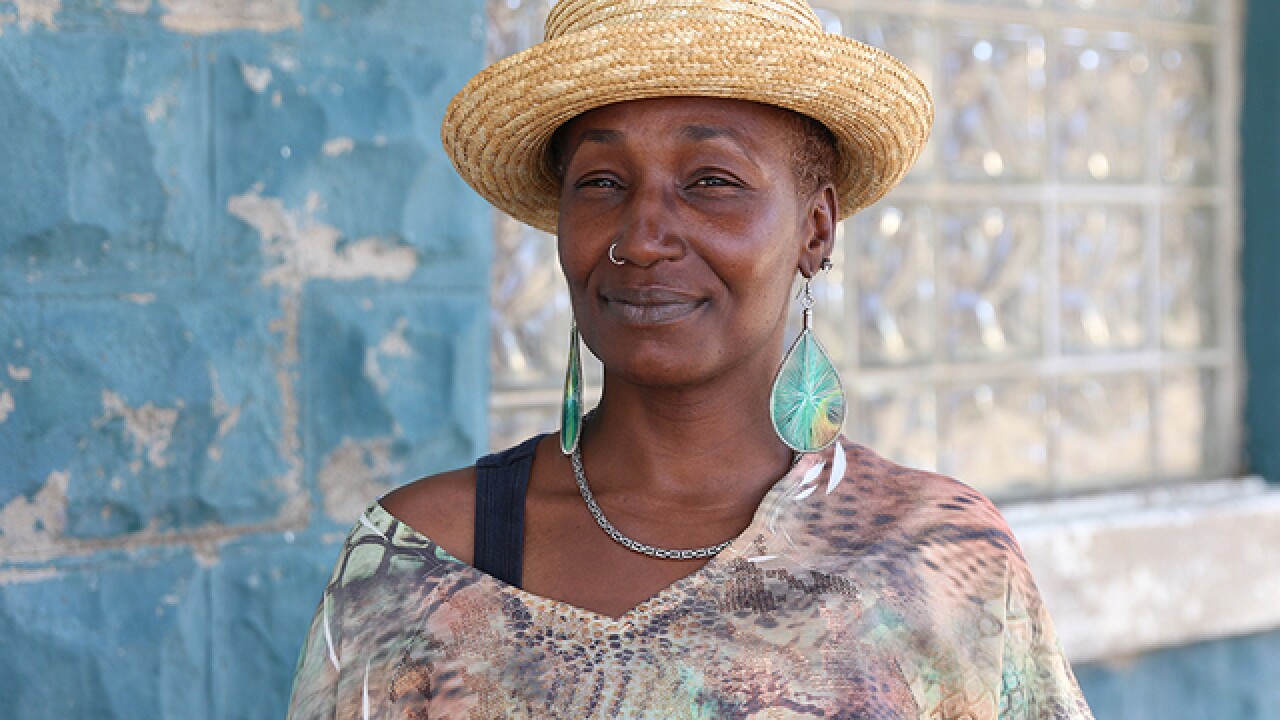 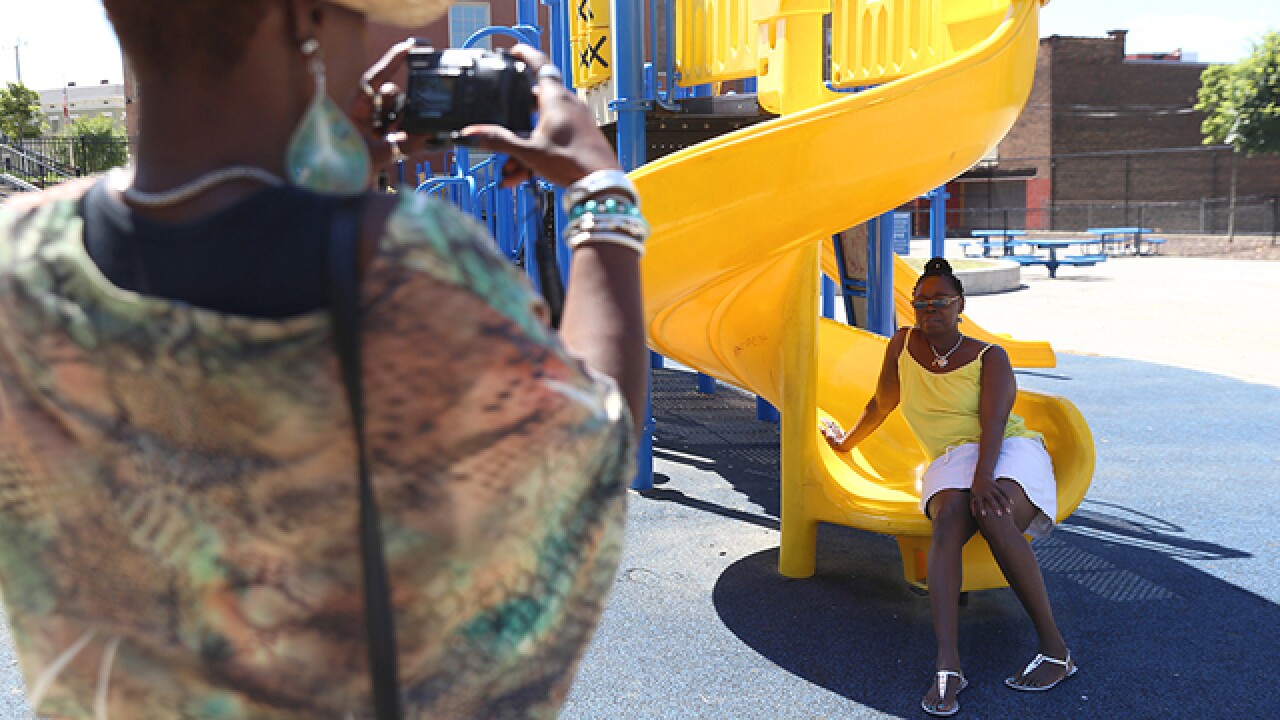 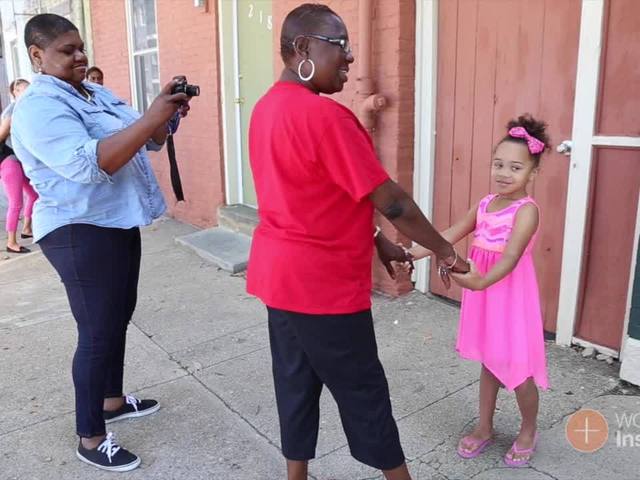 CINCINNATI — It's not quite noon on a recent Thursday in Over-the-Rhine, and an impoverished pocket of the neighborhood feels quiet and still.

Angela Merritt steps into the middle of East Clifton Avenue north of Liberty Street and lies down, centering her body on the yellow line before closing her eyes and playing dead.

"Like you always say Ms. Angie, the struggle is real," Waketha Akins calls from the sidewalk.

Valarie Dowell nods in agreement. "They was shooting all night up here," Dowell says, looking in the direction she had heard gunfire the night before. "All night."

Welcome to The Women of OTR Support Group, a small but mighty congregation of neighborhood moms who meet from 11 a.m. to noon each Thursday. They swap stories, offer advice and learn from each other and the occasional guest speaker.

Angela Merritt started the group in December after being part of a meeting at Over-the-Rhine Community Housing , a nonprofit that operates low-income apartment buildings throughout the neighborhood. Merritt was an AmeriCorps VISTA member working at Over-the-Rhine Community Housing at the time. She other staff members were discussing what to do about all the drug dealing on East Clifton Avenue where the agency operates subsidized apartment buildings — and where Merritt and her young daughter live.

Merritt spoke up at the meeting. She suspected some of the single moms on East Clifton were helping the dope boys, whether they meant to or not. She suspected that because she had been there herself.

"For myself, when I was younger and receiving assistance, I did some things to help get more money for my children because that money wasn't enough that they were giving me to survive or to have my children look decent," Merritt said later.

She knew the lengths that single moms living in poverty would go to in order to help their children. Maybe they let the dope boys charge their cell phones for a small fee. Maybe they got paid for more than that. She had done things like that years ago.

Merritt suggested starting The Women of OTR Support Group to create a stronger community among these neighbors in need. She gathered just a few moms at first. The group has grown over the past six months — both in its numbers and ambitions. Its members are convinced they can make a difference for themselves, their children and their community.

A Single Mother, Overwhelmed and Addicted

Merritt doesn't need someone from outside the neighborhood to tell her what needs to happen. She has spent enough time there to know, she said. She understands the struggles of moms living in poverty because she is one of them.

Merritt didn't grow up poor, but her childhood wasn't easy.

A man she trusted molested her when she was a little girl. She lived with the anger, guilt and shame for many years. She felt drawn to drugs and alcohol and started using when she was just 12. She started having babies when she was 19 to find love in a cruel world.

"By the time I was 25, I had three kids. I was on welfare. It was overwhelming for a single parent," said Merritt, who is now 47. "I was always looking for love, I should say, in the wrong places."

She began taking college courses when her kids were little but started snorting cocaine. Before long, she became consumed with getting her next fix and could no longer take care of her children.

Without her children to anchor her, Merritt became homeless, living on the streets of Over-the-Rhine, sleeping with men who could feed her drug habit — or with men who paid her so she could feed the habit herself.

Merritt was raped three times while she was living on the streets, she said.

She had another child while she was homeless and addicted. The baby girl was born addicted to cocaine, and Merritt's aunt took custody of her.

Merritt was homeless for 11 and a half years. She began to get scared that she would die alone.

"I just started praying more and was asking God to help save my soul," she said. "I had lost the ability to stop, and I didn't want to die in the streets because of the drugs and alcohol and homelessness."

Then one morning she woke up in an abandoned building near Washington Park and heard a voice.

She decided it was the signal from God she had been waiting for.

"I just started walking towards the Drop Inn Center," she said. "As I was leaving out of the building, people were calling me — the drug dealers, the people I used to drink and do drugs with. The voice said, 'Don't look back. If you look back, you won't make it.'"

Merritt didn't look back. She stayed at the Drop Inn Center homeless shelter for two and a half months. After that, she went to the Anna Louise Inn and stayed there for four months. She got connected with Greater Cincinnati Behavioral Health and got mental health counseling.

She finally started dealing with the childhood trauma that haunted her. She worked to forgive the man who molested her. And she started going to a 12-step program for her alcoholism and drug addiction.

Merritt had her fifth child after she got clean — a little girl who is now 7. Merritt and her youngest daughter live in an Over-the-Rhine Community Housing building on East Clifton Avenue — alongside so many other moms and kids who struggle to make it month after month.

Merritt figures all of the trauma and pain she survived help her understand the other moms of Over-the-Rhine better than some well-meaning person from outside the neighborhood.

"I can relate to a lot of the women because before I became homeless down here, I was struggling and battling other issues that kept me doing things that was unhealthy for myself and my kids," she said.

The Women of OTR Support Group is her way to help heal and be healed. And the group's members say that it's working.

On a recent Thursday, the women were gathered in an Over-the-Rhine Community Housing space where they meet.

Local photographer David Rosenthal was there, volunteering his time to give the women some basic tips about taking good portraits. He split the group into pairs, lent each pair a camera and then sent them outside.

Merritt paired up with Micko Shepard, whom she has known since they were on the streets together. Shepard is clean now, too, and is reconnected with her two grown sons and two grandchildren.

"I'm grateful Angie thought of this," she said. "We all at some point in our life need an outlet."

She and Merritt snapped photos of each other outside of buildings, in front of gates and on a nearby playground before Merritt posed in the street.

Nearby, Waketha Akins felt confident with the camera. She had been at the support group meeting the week before when Rosenthal came with tips on taking pictures of the neighborhood and seeing the beauty in a place that can be so harsh. She was particularly fond of a photo she had taken of a tree.

"Down here is rough," said Akins, who has 11 children and supports herself and six of her kids on less than $800 a month.

Akins is worried that her twin boys can't read as well as they should. There's only so much she can help, she said, because she reads at a fourth-grade reading level herself.

She went to the school board to complain, and a man there made her feel small and stupid.

Akins wondered aloud why schools that serve less affluent black children seem to be permitted to fail. She's certain that kids at the white schools can read on grade level, she said.

"White schools got everything," she said.

"But do we really advocate?" Valarie Dowell said, interrupting Akins. "When they (white parents) want something, they fill the room up. If we don't show up, they don't listen."

Dowell's children are grown, she said, but she advocates for her grandchildren — and for all the children of Over-the-Rhine and Cincinnati. Merritt chimed in, telling Akins that advocacy is the best way to bring about change.

"This is one way that people can see and hear that the struggle is real for us single-parent mothers," Merritt said. "Our children are dying. We are dying. The community is dying — losing hope."

Mothers have to work together to learn from each other and teach their children to speak up, too, Dowell said.

"And that's stopping the cycle," Merritt said. "This is how you do it. The proper way."

"Without going to jail," Akins said.

"Without getting killed," Merritt answered.

The women walked back into the community space to turn in their cameras.

Rosenthal promised to come back with photos printed for the women and more lessons to teach.

But as much as they can learn from him, it's a sure bet they will learn more from each other.

That's the power of The Women of OTR Support Group — the women themselves.

Lucy May writes about the people, places and issues that define our region – to celebrate what makes the Tri-State great and also shine a spotlight on issues we need to address. Childhood poverty is an important focus for her and for WCPO. To read more stories about childhood poverty, to go www.wcpo.com/poverty .

To read more stories by Lucy, go to www.wcpo.com/may . To reach her, email lucy.may@wcpo.com . Follow her on Twitter @LucyMayCincy.