City and county argue: What to do with the poo? 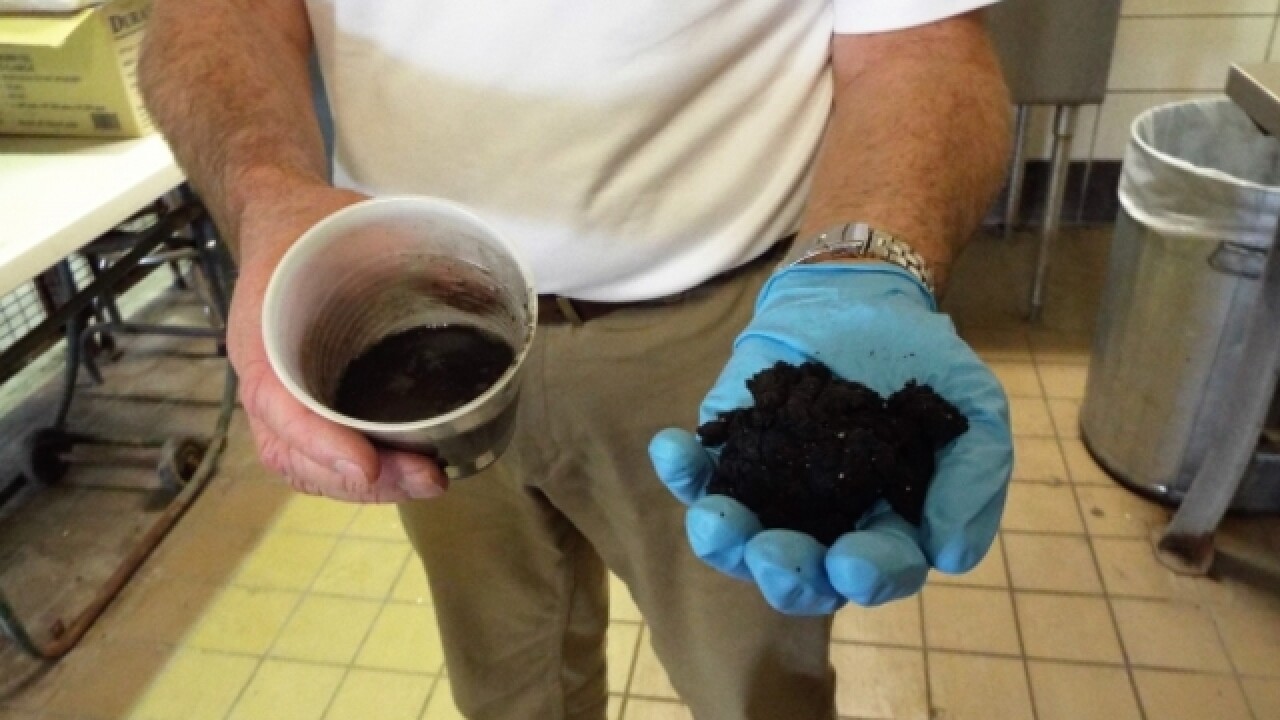 <p>Robert Bates, who oversees Louisville Metropolitan Sewer District's Morris Forman Wastewater Treatment Plant, holds a cup filled with waste that has been de-watered but not dried. In his gloved hand, he holds the pellets that form when the waste is dried. Kevin Eigelbach</p> 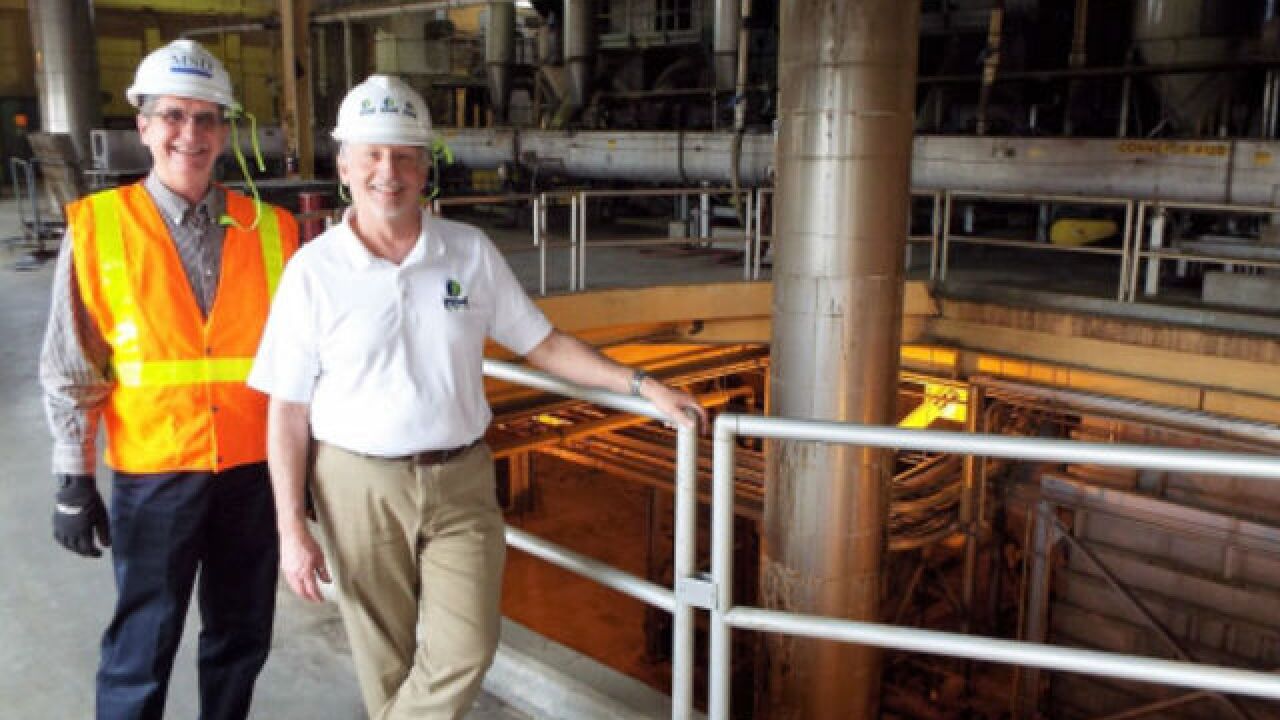 CINCINNATI -- What to do with the poo?

That’s the argument Cincinnati and Hamilton County officials are having about the solids left over when sewage is treated at the Metropolitan Sewer District of Greater Cincinnati plant on Kellogg Avenue.

Now, those solids are burned in the Little Miami solid waste incinerator next to the plant. But that plant is out of compliance with EPA rules for incinerators and is scheduled to close March 21.

As WCPO.com previously reported, city and county officials have not agreed on a temporary solution to the problem. But long-term, MSD wants to build two anaerobic bio-digesters that would make the solids usable as fertilizer or compost.

Though the idea may sound odd and downright icky to some, Cincinnati is by no means the first city to consider transforming poop into farm-grade fertilizer.

Fifteen years ago, the Louisville Metropolitan Sewer District spent $75 million on upgrades to its largest treatment plant, the Morris Forman Plant in the West End, that included a series of dryers that heat the sludge to 200 degrees, killing all pathogens, and reduce the waste to little black pellets of fertilizer.

(Dried sludge is only 5 percent water, but sludge that doesn’t go through the drying process is about 70 percent water and has the consistency of dough.)

Conway, Arkansas-based Mannco Fertilizer Co. sells those pellets to large farms or packages them under the name Louisville Green and sells them to farm supply chains. Farmers like the product because most of it is water-insoluble, and it won’t wash away after a big rain as chemical fertilizers do, said Robert Bates, who manages the Morris Forman plant.

In case you’re wondering, Louisville Green smells like dried cow manure or a hamster cage that needs to be cleaned. It’s not pleasant, but it’s much better than the treatment plant itself, which smells like the world’s biggest pit toilet.

Bad as that smell is, though, it was much worse before the installation of the dryers. The reduction of odors and landfill costs were the two biggest reasons Louisville MSD decided on the fertilizer option, said MSD Director of Operations Alex Novak.

The process not only saves money – it makes money.

Morris Forman treated about 100 million gallons of sewage per day last year, Novak said, and about 25,000 tons of fertilizer per year. Mannco buys it for $20 per ton, he said, but that increases to $25 per ton in April.

In 2013, MSD received $460,000 for its product, the most money it has ever generated. Since then, age-related problems with the drying system have reduced the amount of fertilizer produced and increased the amount landfilled. The revenue goes into MSD’s general fund, Novak said, and offsets landfill costs of $30 a ton for the sewage that doesn’t get dried.

Milwaukee’s been at it so long, in fact, that people see that sewer district as more of a fertilizer company than a wastewater treatment plant. MSD creates, packages and markets about 45,000 tons of Milorganite annually, he said, and it’s sold at hardware stores throughout the country for as little as $6 per a 36-pound bag.

Unlike Louisville Green, Milorganite finds its way onto golf courses and residential lawns, Spence said. But that didn’t happen without millions of dollars’ worth of marketing about the safety and benefits of the product, he said.
The Milwaukee MSD grosses about $8.7 million annually from Milorganite sales, Spence said, which is enough to cover its production costs and make a little money. But there’s also value in recycling something that would otherwise take up landfill space, he said.

There are about 30 other U.S. municipalities with similar programs, he said, and Milwaukee would like to see more. “It’s all about beneficial re-use,” Spence said. “That’s what drives us.”

Unlike Louisville or Milwaukee, Cincinnati would not dry the sludge but use an anaerobic process, in which microorganisms feast on it, creating gas that would be burned to reduce electricity costs. The end product would look and feel more like wet sand than pellets, said project director Max Spidare.

An outside contractor would take care of operating/maintaining the digester, marketing the product and delivering it to customers, Cincinnati MSD Director Gerald Checco said. About half a dozen potential partners have expressed interest in doing that, he said, including General Electric Inc.

It would take 18 to 24 months to get one or both digesters up and running, Checco said. But it’s something MSD might as well do now, he said, because the worldwide effort to reduce greenhouse gases will end disposal by incineration within 10 years.

Building a digester now “gives us the experience to move more boldly into non-incineration disposal,” he said.