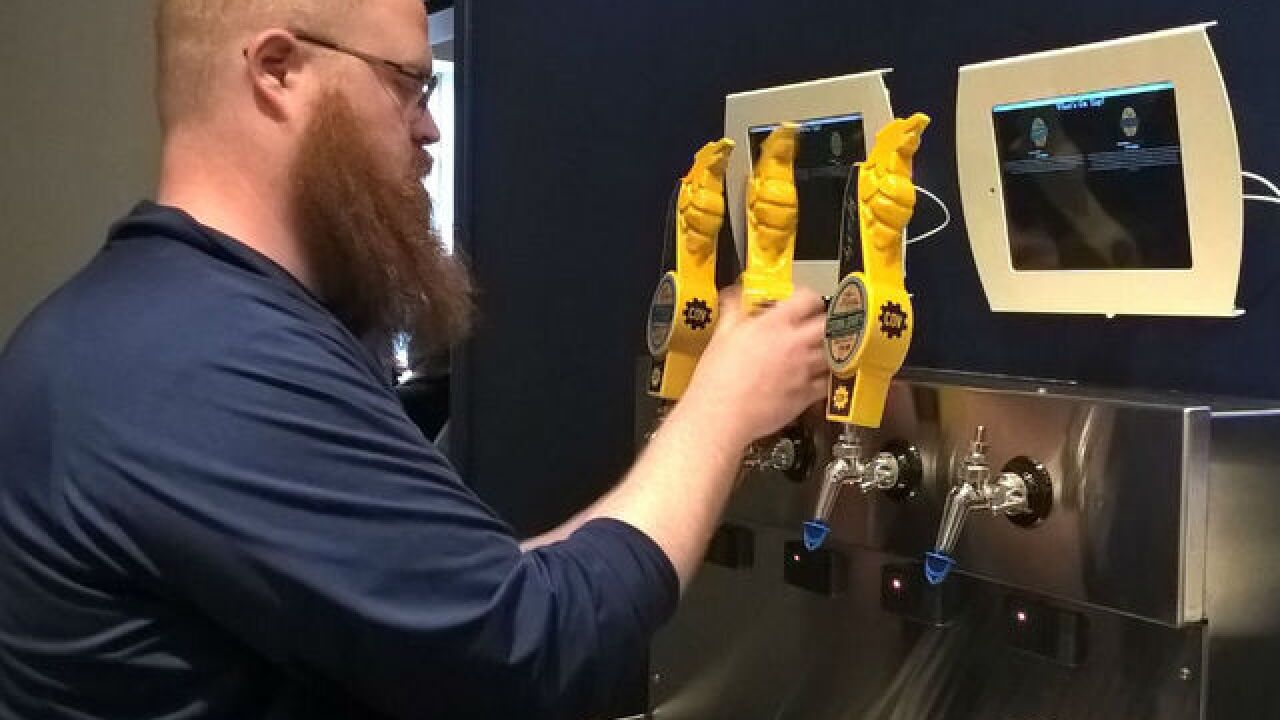 To pour or not to pour – for yourself – is the question facing breweries when it comes to their taprooms.

Taprooms have risen in importance for local breweries over the past three years, and as taprooms are built, updated or expanded, there are many features that breweries must consider. But while self-serve taps have been appearing more frequently in bars, restaurants and even Great American Ball Park, don’t expect that trend to extend to taprooms -- at least not at the moment.

Perhaps the biggest reason you won’t see many self-pour taps is because of the human interaction involved in ordering beer at a taproom. Ask anyone in a taproom, and they will tell you there is a premium put on customer experience.

“We never even really considered them for a few reasons. Primarily, we want customers interacting with us and our bar staff, not a screen,” said Brandon Hughes, co-owner of Nine Giant Brewing, which is currently constructing its taproom. “This lets us get to know our customers (and vice versa) and get vital feedback about their experience at our brewpub.

"Not only is it far more personable, but it also lets us help customers find beers that might best fit their tastes and interests, which we believe creates a better experience,” Hughes said.

"We like the idea of a human connection and the community experience when you have a knowledgeable bartender pouring and sharing about the beers," Stuart said.

Two local breweries with self-serve taps have found they work best with big groups. Moerlein Lager House has self-serve taps on only one table, which can accommodate up to 16 guests, and manager Justin Wiener said the taps are very popular.

"Generally, they are used for large parties," Wiener said. "We show them when they are seated how to do a proper pour."

Braxton Brewing has four self-serve taps in its special events room, but the taps are not used daily.

“We saw it in San Diego and thought it was a cool concept,” said Jonathan Gandolf, Braxton spokesman. “We love the technology, and it works well for our space. There are parties that love the novelty of pouring their own beer. We built it in a way we can pull anything we brew in there. We let our guests select what is served.

“The self-pour taps are great for events because the customer has typically already had that experience and there is additional value to being able to pour their own beer instead of making trips back and forth to the bar,” Gandolf said.

Still, he acknowledged that self-pour taps aren’t necessarily something Braxton would want to use for every customer that visits the taproom. “People are at the place you make the beer because they want that experience,” he said.

“When we were in San Diego, it was easy because it was all self-serve taps. But the inherent issue is: It takes some training to pour a beer. If you don’t do it right, you get all foam,” he said. "You don't want to charge the customer for foam, and you also don't want to waste beer."

“There's actually some skill to properly pouring beer, mostly as it comes to pouring a proper head,” said Nine Giant's Hughes. “A huge part of the taste of the beer actually comes from the volatilized aromatics from the head. Most customers using self-pour taps will probably try to minimize head.”

Sanitation can be an issue when it comes to pouring beer, as well.

“My understanding of these systems is that it allows customers to reuse glassware and pour their own beers. Reusing glassware is a huge no-no for bars because there's a very high risk of transferring a customer's germs that are on the glass to the tap faucet, and then to every beer poured from it until it's cleaned next,” Hughes said. “That risk is only compounded if people touch the tap faucet to their glass (which is also a no-no), but most people tend to pour beer that way if they aren't trained.