Saving a species: How does the Cincinnati Zoo's CREW team revive plants like the autumn buttercup? 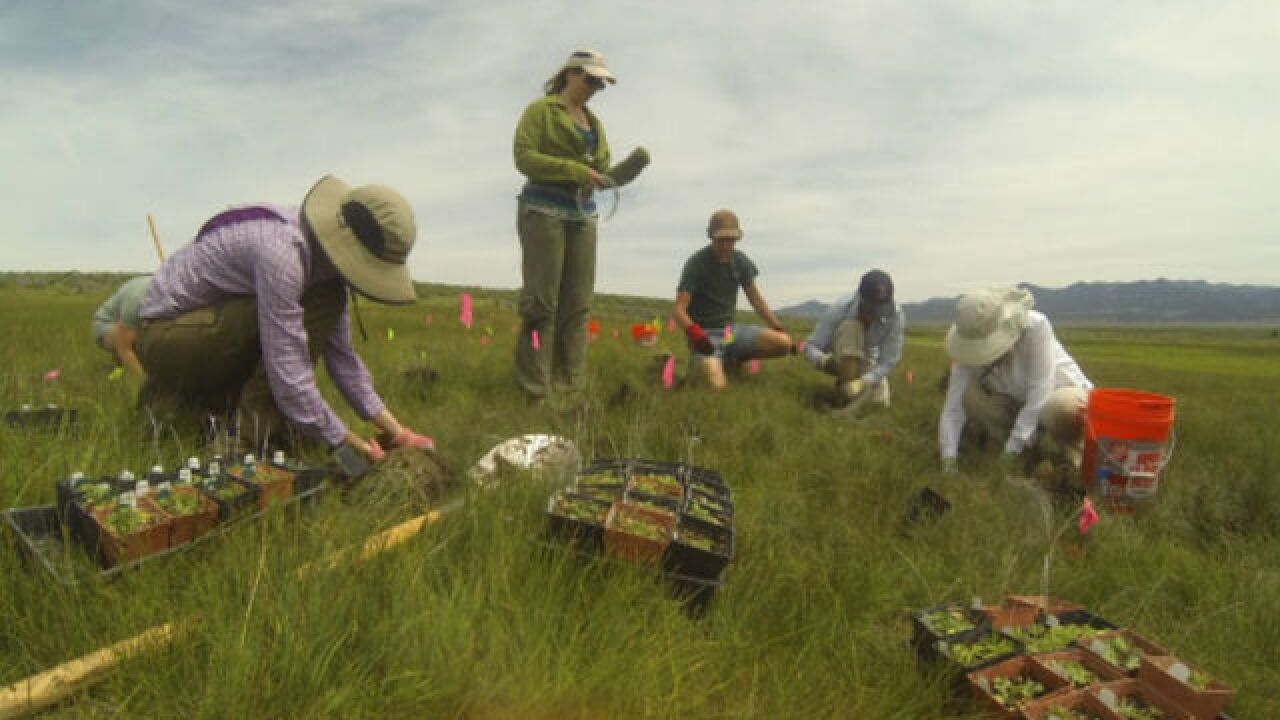 Copyright 2017 Scripps Media, Inc. All rights reserved. This material may not be published, broadcast, rewritten, or redistributed.
<p>In early June, volunteers with the Cincinnati Zoo and Botanical Garden's Center for Conservation and Research of Endangered Wildlife worked over three days to plant more than 900 autumn buttercups in an attempt to repopulate the species in its native Utah. (Photo provided)</p>

CINCINNATI -- Sometimes the survival of a species hinges on unraveling the mystery behind what makes it happy.

For instance, take the curious case of the autumn buttercup, Ranunculus aestivalis. For the past decade, the Cincinnati Zoo and Botanical Garden's Center for Conservation and Research of Endangered Wildlife, or CREW, has been participating in a joint effort to save the species from extinction.

The elusive perennial grows in only one area of the world, a small region near the town of Panguitch, Utah. Since being identified in the late 1800s, the federally endangered autumn buttercup dwindled at one point to only 20 remaining in the wild.

“I think it’s hard for people who don’t work with plants to really think about them as species,” said Valerie Pence, CREW director of plant research. “I think they think about them as a signature backdrop to our world and they’re very important in that way, but each individual is as much a species as an animal. It’s really important to convey that message in order to understand that those species can be endangered as well.”

In early June, 25 volunteers worked for three days to complete the most aggressive attempt to repopulate to date, Pence said. They planted more than 900 adult buttercups. In addition to 300 provided by the Arboretum at Flagstaff that were produced traditionally from seeds, she said, CREW provided 600 buttercups from cloning techniques using tissue culture stored at the facility’s CryoBioBank.

“(Flagstaff) would get one plant per seed, where we could multiply our plants and get anywhere from three to seven plants per seed,” Pence said. “We wanted to maximize the genetic diversity; that’s why we didn’t just take one seed and multiply hundreds from that just one.”

Pence said she’s optimistic about this year’s attempt, as a large number of buttercups seem to be thriving from the last out-planting in 2013. However, she said that’s not always been the case with the capricious species.

When the partnership of CREW, the Nature Conservancy, the Arboretum at Flagstaff, United States Fish and Wildlife Service and Weber State University formed in 2007 to take on the project, they believed the reason for the species decline related to lack of moisture in the soil, she said.

“So when we did the first out-planting, they planted in sort of a real wet area and a real dry area and to test that hypothesis, and as it turned out, the plants in the wet area were the ones that died first,” Pence said. “So it was the opposite of what we thought.”

During the next attempt in 2010, they encountered an infamous vole incident where the little critters devoured the buttercups like a salad bar, she said -- all because of ground vegetation overgrowth that resulted from restricted cattle grazing. After learning from their previous missteps, they now plant in dry areas, allow some cattle grazing and cage plants to protect them from voles.

“I think we’ll get a good survival based on the past survival and the best practices they used from the last time,” Pence said. “Hopefully this really will build up the population. That’s the main goal.”

“This project was a great opportunity to support both our mission and (CREW’s) very important conservation cause,” she said. “The young man that we partnered with and helped support in this project was already a local volunteer at the zoo.”

After volunteering the past two summers in the zoo’s horticulture department, Wolke said he jumped at the chance to work in the field with an endangered species. The experience involved slogging through muddy soil and digging in dirt under the hot sun -- activities he said he thoroughly enjoyed. He hopes the group's ongoing research will break the code as to what makes the autumn buttercup flourish.

“When they do start to get them to grow again naturally in their natural habitat, or figure out what was causing the decline, I’ll know that I contributed to that in planting however many of part of 920 plants I planted,” he said.“But I’ll be able to look back and I think it’s awesome.”

Sharing Wolke’s story through video will ideally inspire other young people to volunteer, Ruttkay said. Through his experience, she wants others to see how his local volunteer efforts in horticulture translated to a global scale and how they compare and differ. She said ultimately, they want encourage and illuminate the importance and impact of volunteering in all shapes and forms.

“CREW’s plan was to tell the scientific story of the trip, and we wanted to tell the story of engaging in volunteerism,” she said. “We wanted to give (Wolke) that opportunity to take his local horticultural efforts at the zoo global and be part of the global community.”

As 2017 marks the 30th anniversary of the Cincinnati Zoo officially becoming a botanical garden, Pence said it brings to the forefront the importance of trying to preserve endangered species of plants as well as animals. She explained that's why they continuously bank seeds and genetic plant material in their CryoBioBank.

"Really, the purpose is not just to keep them in a holding pattern forever. What you really want to do is to restore populations that are struggling in the wild, or replace them if they’ve gone extinct in the wild," she said. "So the restoration piece is such an important piece. I’m just really excited we’re able to be part of that."