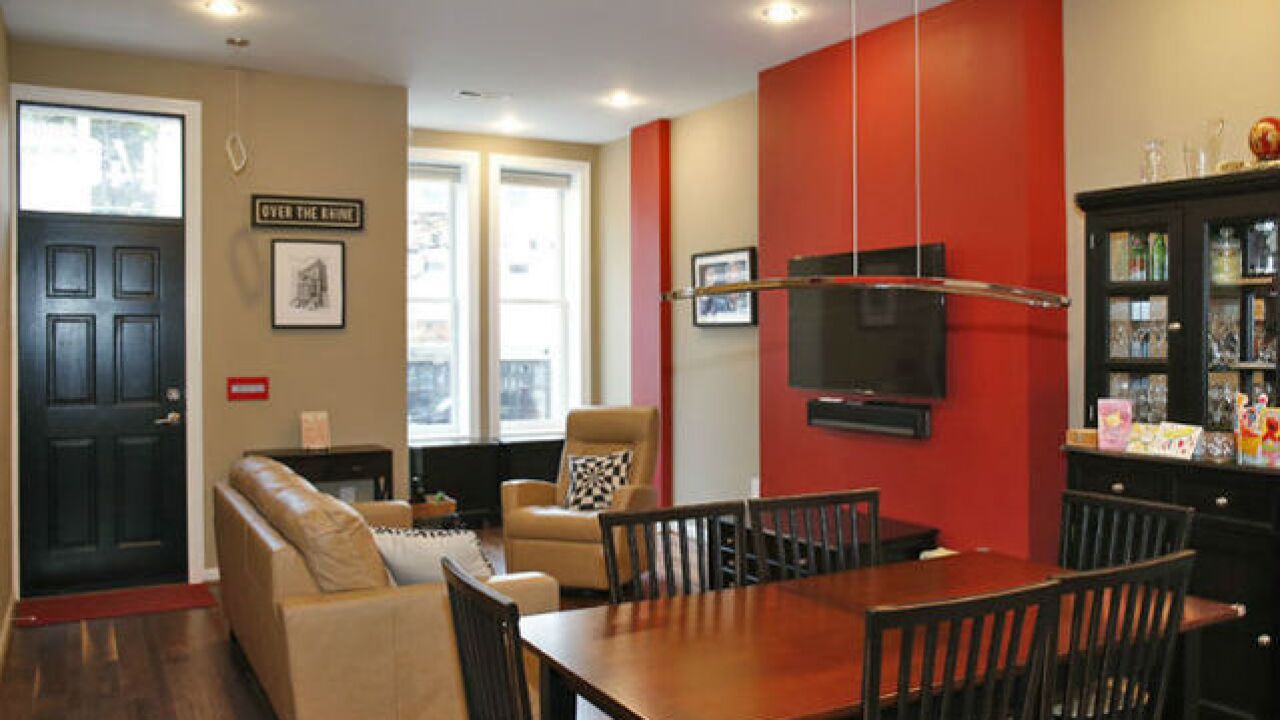 CINCINNATI — Andy Holzhauser is a green-living guy who didn’t know a lot about historical preservation in 2013. That's when he and his building partner took on a project to restore an 1890s Queen Anne tenement building located a Frisbee toss from Washington Park in Over-the-Rhine.

On Saturday, starting at 10 a.m., he’ll share his story during a day-long open house that benefits the Cincinnati Preservation Association.

RELATED: See a photo gallery of the home before Saturday's tour.

Those who pay the $5 admission to enter 1407 Elm St. will learn from Holzhauser about the ups and downs of the preservation process as well as the ins and outs of procuring historical and Leadership in Energy and Environmental Design (LEED) tax credits that made his project affordable.

Holzhauser — a Miami University graduate, former accountant and founder and CEO of the nonprofit Greater Cincinnati Energy Alliance — partnered in the project with Jim Daniels of Maestro Development/Daniels Homes, who owns the other unit of the U-shaped, four-level, brick building.

They took an essentially solid structure that had been abandoned for about 20 years and turned it into an old-but-new showcase that features a restored facade, solar panels, high-performance windows and insulation, state-of-the-art mechanicals, new staircases, rooftop deck, modern furnishings, a lower-level studio apartment (it’s furnished and for rent) and an expanded basement garage with a deck on top.

The half of the building where Holzhauser, his wife Janice Liebenberg and their 2-year-daughter have lived since October is close to 100 percent completed and occupied and shows few signs of restoration inside. But they are there, Holzhauser said, hidden behind new drywall.

“Most people’s gut feeling is if you want to preserve history you have to have exposed brick, but that’s not the case, Today’s drywall is yesterday’s plaster,” and achieving that original 1890s plaster-like look was a key to satisfying the review boards that award historical tax credits.

Gone from the living room and kitchen, which are in one long room inside the front door, are a fireplace and secondary chimney. But the bump-outs in the walls they occupied were preserved and dry-walled. (The fireplace bump provides a natural spot for a large, flat-screen television.)

One thing that’s missing from the big room is the original staircase that had been just inside the front door.

Holzhauser’s preservationist-approved plan to move it to beyond the kitchen allowed for a contiguous case of 97 steps from the sub-basement to the rooftop deck that overlooks the corner of Elm and 14th streets and Washington Park.

“It took a lot of research to validate that we were allowed to do that,” Holzhauser said.

The design of the house — which has 3 bedrooms, 3½ bathrooms, lower-level laundry and mud rooms and a half-new garage accessible via a shared driveway on the building’s backside — is unusual for Cincinnati, said the Cincinnati Preservation Association’s Margo Warminski.

Its twin, step-up entrances and raised-basement apartment are more common in big cities such as New York and Boston.

“I wish I knew who designed the building. It’s not an off-the-shelf, over-the-counter house design for OTR,” she said, adding that there are several similar to it on McMicken Street in the Brighton and Mohawk neighborhoods.

The Queen Anne facade is rare for Cincinnati as well, Warminski said, and the restoration work on it is difficult to discern.

A lot of work went into making the facade’s windows, decorative trim features and replaced brick meet preservation review standards, Holzhauser said. He and Daniels took photographs of the trim and original iron work to local artisan craftsmen to reproduce. And they had to replace the crumbling staircase up to Daniels’ unit.

The work is so aesthetically accurate “you won’t even know it’s new,” Warminski said.

“This building took five years, from incubating the interest until ultimately completing it,” Holzhauser said. “We were lucky. It had a solid roof and a dry basement. All things considered, we had some strong bones to work with.”

And being an energy-efficiency advocate, Holzhauser knew their investment in green materials and systems would be paid off in 7-8 years through energy savings. The three-panel solar system alone should reduce their utility bills by $10,000 over the next 15 years, he said.

Liebenberg, who is manager of corporate and employee engagement at ArtWorks, loves that she can walk to work, day care and Washington Park. That Holzhauser can walk to his work downtown allowed them to sell one of their two cars.

They have no yard, but the park makes up for that, the couple said, and the whole urban environment — which soon will include streetcars passing right in front of their building — suits Tiffin, Ohio, native Holzhauser and South Africa native Liebenberg, who moved to Cincinnati in 2001.

“I fell in love with this buildings when we saw it, the warmth you feel when you walk up the steps,” Liebenberg said.
“We’re going to be here a long time,” Holzhauser said, who moved to Over-the-Rhine in 2009 but kept his condominium in Columbia Tusculum as a fall back.

The Saturday open house will be the fourth the couple have hosted.

“It’s part of the commitment we made to make it all work,” Holzhauser said. “To the extent that we can inspire others, we want to share the mistakes we made and the work of the people who helped us.”

Warminski said the preservation association is prepared for an overflow turnout, like the one that showed up for its tour earlier this year of the Samuel Hannaford family home in Spring Grove Village.

“We’ll take as many people as will fit. If we have a big crowd, we’ll keep them on the steps and keep them entertained,” she said.