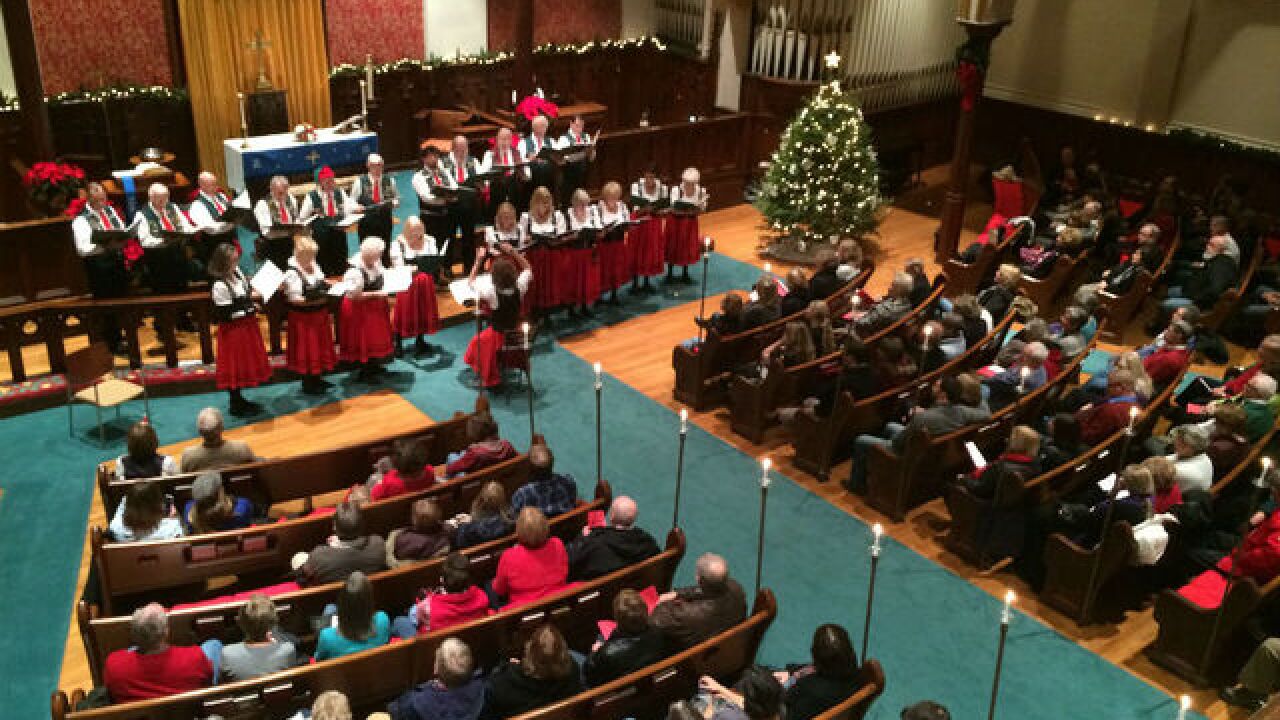 Copyright 2017 Scripps Media, Inc. All rights reserved. This material may not be published, broadcast, rewritten, or redistributed.
Provided
<p>A choir signing during Christmas Saengerfest 2015 in the sanctuary of First Lutheran Church in Over-the-Rhine. (Provided)</p>

CINCINNATI -- If the weather’s good on this Friday and Saturday evenings, upwards of 1,500 people are expected to come through the doors of First Lutheran Church at 1208 Race St. in Over-the-Rhine.

They’ll come to hear performances by some of the 20 choirs or bands performing in Christmas Saengerfest, a festival of Christmas music held at six Over-the-Rhine venues.

It’s a big deal for churches like First Lutheran, which don’t have large congregations anymore, but still provide vital services for the poorer residents of this rapidly gentrifying neighborhood.

First Lutheran became a Saengerfest venue four years ago, pastor Brian Ferguson said. You could make the case that before that, the last time more than 1,000 people passed through the sanctuary doors in two days was 100 years ago, he said.

“It’s neat to see the church being used for what it was designed for,” Ferguson said.

German immigrants established First Lutheran in 1842 and built its present building in 1894. Like most downtown and Over-the-Rhine congregations, members moving to the suburbs have cause the congregation to dwindle.

About 55 people now attend Sunday morning worship service, Ferguson said, which is an improvement over the 30-odd who attended four years ago. It’s hard to bring in new members, he said, because the people moving into nearby homes are often millennials, a generation churches struggle to reach.

That’s why events like Saengerfest are so important, Ferguson said. Any positive connection you can make between people and sacred spaces is good. When the candles are burning and the choirs are singing Christmas music, he said, it feels like a worship service.

“It’s great music,” said Father Tim Sucher, pastoral associate for St. Francis Seraph Roman Catholic Church, another Saengerfest venue. “If somebody is looking to get into the Christmas spirit, that is sure a great way to get into it.”

St. Francis became a Saengerfest venue through its association with American Legacy Tours, a tour company that began in Newport in 2009 but moved to Over-the-Rhine in 2010. The company put St. Francis on its Queen City Underground Tour so visitors could see the crypt beneath the main altar.

American Legacy Tours started Christmas Saengerfest in December 2012 after the five owners noticed that churches in the neighborhood were not experiencing the benefits of the Over-the-Rhine renaissance, co-owner Brad Hill said.

“Churches are so important to the fabric of our city,” he said. “The services they provide, and the spiritual support they provide is huge.”

To create its Christmas Saengerfest, the company modified a Cincinnati tradition of choir festivals held in the spring. First held in Cincinnati in 1849, the original Saengerfest grew by 1870 to more than 2,000 singers and more than 60 choirs. Saengerfest is German for singer festival.

Interest in Saengerfest gradually dwindled after the creation of May Festival, a two-week choral festival now held at Music Hall. The last original Saengerfest was held in 1952.

The company continues to run the festival as a thank you to Cincinnati and as a way to show off neighborhood churches, Hill said. But it’s never turned a profit for the company, Hill said.

Expenses include hiring a shuttle service to take attendees from venue to venue, paying the choirs to perform and giving 100 tickets to each hosting venue.

This year, four of the venues are churches. The other two are Memorial Hall and the Christian Moerlein brewery. The latter was added because so many attendees complained that there were no venues where they could buy dinner, Hill said.

One of the newest venues is Prince of Peace Lutheran Church, 1528 Race St., a congregation established in 1849 that moved into its present location in 1871. About 50 people now attend Sunday worship, Pastor John Suguitan said.

Prince of Peace is a good example of a small church with a large community impact. Aside from the Sunday morning worshippers, from 150 to 250 people use the church weekly, Suguitan said. They come for free programs such as a community Wednesday night meal, an adult literacy class, a tutoring/mentoring program for kids, a daily Bible study/lunch.

The church became a Saengerfest venue in 2016, after the church raised more than $250,000 to restore its sanctuary, which it hadn’t used for worship in more than 30 years. Now, the church uses the sanctuary all the time, including for performances by local artists the second Sunday of every month.

“That sanctuary is wonderful,” Suguitan said. “The acoustics are amazing. It’s a wonderful spot to offer to the community.”

A church building should be open as much as possible because it belongs more to the community than to anyone else, said Ian Strickland, pastor of Over-the-Rhine Community Church, another Saengerfest venue.

Most of the people who attend don’t live in the neighborhood, so they rarely express interest in worshipping at the church, he said. But hosting is a “low-overhead” opportunity to benefit others that doesn’t require much from the church.

“It’s more about offering a resource we have to enjoy the season and bring people joy,” he said.

If you go: Christmas Saengerfest happens from 7-11 p.m. Friday and Saturday at six Over-the-Rhine venues. Tickets are $30 for each night, and may be purchased here.