XU No. 2 in RPI heading into conference play 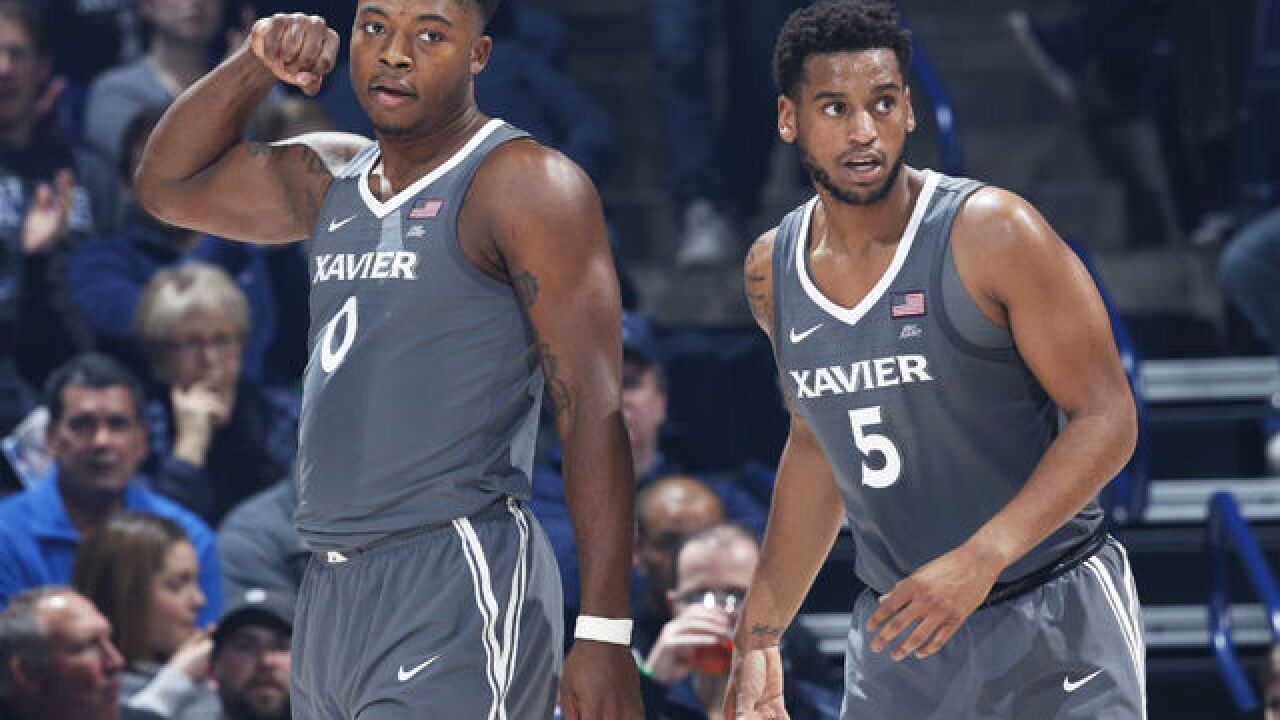 Image copyright 2017 Getty Images. All rights reserved. This material may not be published, broadcast, rewritten, or redistributed.
Joe Robbins | Getty Images
<p>Tyrique Jones #0 and Trevon Bluiett #5 of the Xavier Musketeers react in the second half of a game against the Marshall Thundering Herd at Cintas Center on Dec. 19, 2017. Xavier won 81-77. (Joe Robbins/Getty Images)</p>

The Musketeers (12-1) are No. 2 in the RPI with the nation’s 16th best strength of schedule. They’ve tied the best start in program history through 13 games, ascended to No. 6 in the Associated Press Top 25 -- just one perch off their program-best ranking of No. 5 -- and won seven straight games.

Undefeated Villanova continues to occupy the No. 1 slot in the latest national polls. But Xavier has a huge target on its back, too, making Wednesday’s 8:30 p.m. Big East opener at Marquette the start of a whole new gauntlet.

The Musketeers will receive the best shot of the Golden Eagles, and every team thereafter in the 18-game Round Robin league slate.

“We have nothing but the utmost respect for Xavier,” Marquette coach Steve Wojciechowski said in Tuesday’s Big East coaches’ teleconference. “We’ve played a few of the best teams in the United States already in Purdue and Wichita State. I think Xavier’s the best team we’ve played thus far.”

Xavier fell to Marquette last season -- twice. In the first outing, Xavier was six games removed from losing Edmond Sumner to a season-ending knee injury and Trevon Bluiett was out with a sprained ankle. Turnovers and a thin roster took a back seat to the spectacular performance of Marquette guard Markus Howard, who erupted for 34 points behind nine 3-pointers.

The teams met three games later, on senior day at Cintas Center. It was the last XU loss in a six-game skid, and even the return of Bluiett couldn’t stop a Marquette juggernaut that scored 25 points off turnovers.

Marquette finished the season ranked sixth among 10 teams in the Big East standings, proving just how tough a league game can be on a given night. Xavier went 9-9 in the league, finished seventh, and later reached the NCAA tournament’s Elite Eight.

Based on the victories Xavier has amassed this season -- a resume that has just one loss, to No. 3 Arizona State on a neutral court -- the Musketeers are winning at the NCAA Selection Committee’s new Quadrant System. The system divides games into four quadrants of value based on location and RPI. There is a greater worth for road wins and neutral court victories.

A win at Marquette would qualify for Quadrant 1 territory, as would road victories against every Big East team except Georgetown and DePaul.

There will be no rest for the weary.

“It’s a very good league that we’re in,” coach Chris Mack said before Xavier departed for Marquette. “We’re very fortunate. We’re going to have wars every night. Not a lot of time off for us -- we don’t have a bye until about the sixth week of conference play. So here we go.”

Xavier has a leg up on some of its league mates by virtue of three seniors -- Bluiett, J.P. Macura and Sean O’Mara -- who are accustomed to elite-level competition and know what it takes to win high-stakes games on the road. Hostile opposing crowds often elicit a, well, competitive spirit (see: Macura’s gator chomp at Wisconsin fans).

As the Musketeers hunt for a Big East regular-season title, they have to keep pace with, and overtake, Villanova. Losses to most other league teams won’t blemish their resume but could play a role in postseason seeding.

One game at a time, right? The most clichéd answer actually is the most apt here as a now-healthy Xavier tries to extend its record to 13-1 and deny Marquette a Top 10 win. Each win could will pay dividends for a Musketeers team with big goals in mind.

“They present problems on both ends of the floor,” Wojciechowski said. “That’s why they’re a team that I think can win a national championship.”

Shannon Russell is a freelance writer who covers Xavier basketball for WCPO.com. Follow her on Twitter @slrussell.