Russell: Trevon Bluiett is in a shooting funk and the Xavier Musketeers are struggling as a result 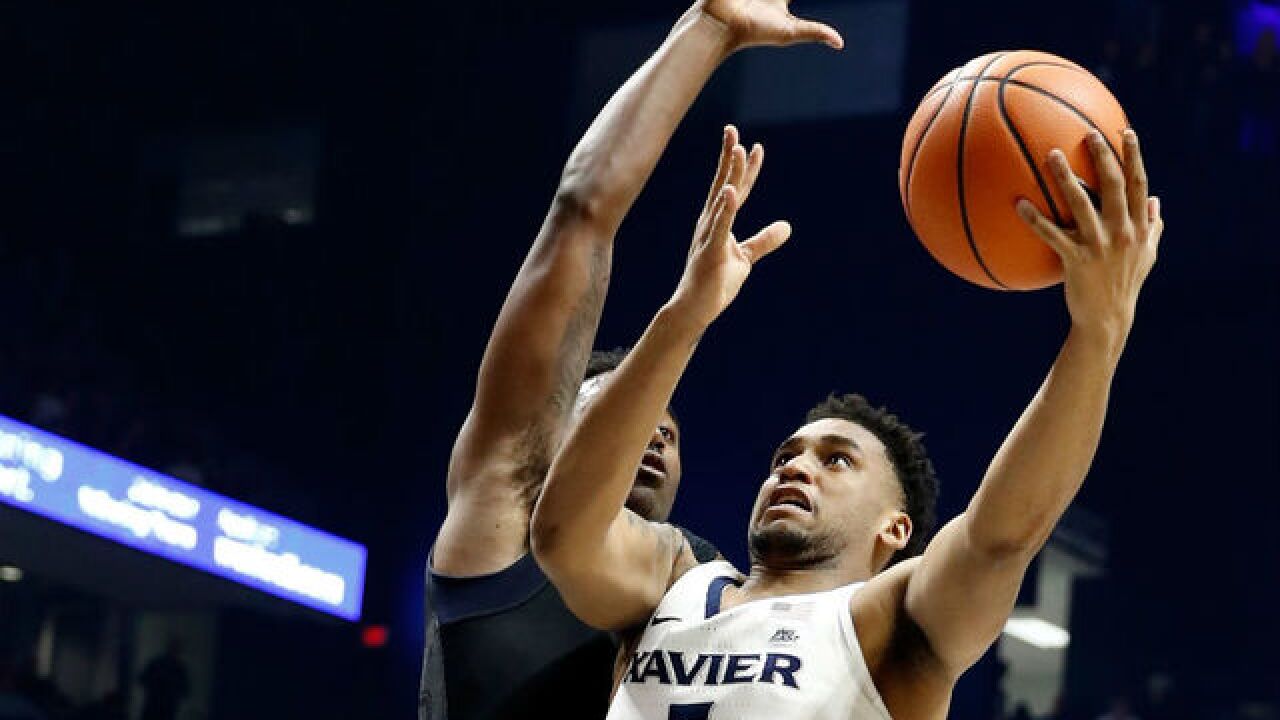 Image copyright 2018 Getty Images. All rights reserved. This material may not be published, broadcast, rewritten, or redistributed.
Andy Lyons | Getty Images
<p>Trevon Bluiett #5 of the Xavier Musketeers shoots the ball against the Butler Bulldogs at the Cintas Center on Jan. 2, 2018. (Andy Lyons/Getty Images)</p>

CINCINNATI -- In what has become an all-too-familiar script, Xavier standout Trevon Bluiett struggled with his shot in Wednesday’s loss to No. 1 Villanova at the Wells Fargo Center in Philadelphia.

An early 3-point attempt looked good but rimmed out. An off-balanced attempt fell short. Then another. Before long, Bluiett had missed four of his first five field goals and No. 10 Xavier faced a deficit it never could overcome.

Bluiett finished the 89-65 rout with 11 points, well below the 19.4-point team-leading average he owned entering the contest. The troubles on offense prolonged a head-scratching trend of late, and that’s that the senior from Indianapolis has shot just 34.2 percent in Xavier’s last eight outings.

It’s no coincidence that Xavier has struggled in that stretch, needing comebacks for some wins and absorbing two of its three losses along the way. Bluiett scored 12 points in the first half at Providence. He never scored again.

In the last two games alone, he has gone just 8-for-25 from the field.

What makes the slump so perplexing is that this is the year for Bluiett. It’s why he returned to college (twice) after considering leaving early for the NBA draft. It’s the last piece in a shining four-year career, one in which he already has claimed the fifth spot on Xavier’s all-time scoring list and could ascend even higher.

Bluiett has the chance to go out on his terms. So what’s the hitch?

Asked after the Villanova game whether Bluiett was struggling with his confidence, coach Chris Mack said, "I think so."

"I think he's healthy. I think he's been beat up a little bit but I don't feel like health is a concern," Mack said.

The truth is, even seniors struggle with their confidence at times. Matt Stainbrook did during his final Xavier campaign. The woes made his 26 points and nine rebounds in a thrilling regular-season finale victory at Creighton a welcome catharsis.

Bluiett by his own admission has had confidence issues occasionally in his Musketeers career. He said recently in a FOX feature that he was “used to scoring the ball without any struggles,” making a sophomore slump among the toughest challenges in his career.

He has always bounced back.

This time free-throw shooting is an additional culprit. It’s an area in which Bluiett has excelled, a familiar routine, and the epitome of concentration.

Bluiett was a study in coolness at Wisconsin (10-for-10) and Marquette (10-for-11). Most recently, he went 2-for-5 at Providence and 1-for-5 at Villanova -- unusual lapses by a player who hasn’t missed three or more free throws in any other outing all season.

The snowball effect seems to have gained momentum through Bluiett’s shot selection and opponents’ pressure. It’s also bigger than just Bluiett. J.P. Macura shot 30 percent and committed five turnovers in Xavier’s losses to Providence and Villanova. Kaiser Gates has only taken four shots in both those games combined.

Xavier (15-3, 3-2 Big East) will go as far as its upperclassmen take it, and right now some of those players are pressing. A return to Cintas Center for Saturday’s game against No. 25 Creighton may provide the remedy, as XU is 11-0 on its home court this season.

"We have a really good team. We didn't play very well. Villanova had a lot to do with that," Mack said. "But it's a long season and we have to bounce back and rebound. As bad as we feel right now is as good as we can feel on Saturday."

Bluiett’s shooting struggles have been a common denominator in Xavier's three losses thus far. The Musketeers are at their best when Bluiett is at his best too, and No. 5, by his own admission, hasn’t performed at his top level.

Just a week ago he said he was playing “rushed” in a way he hadn’t earlier this season. He thought more practice reps would recast his poise, but re-establishing consistency in live game action could be more effective.

The last time Bluiett played like, well, Bluiett was in the Dec. 9 win over Colorado. The 6-foot-6 guard scored 25 points, made half his 3-point attempts and went 6-for-7 from the stripe.

Now, his leadership skills and ability to have a short memory are crucial as the Musketeers seek a return to the win column. With both, Bluiett is due for a whopper of a game.