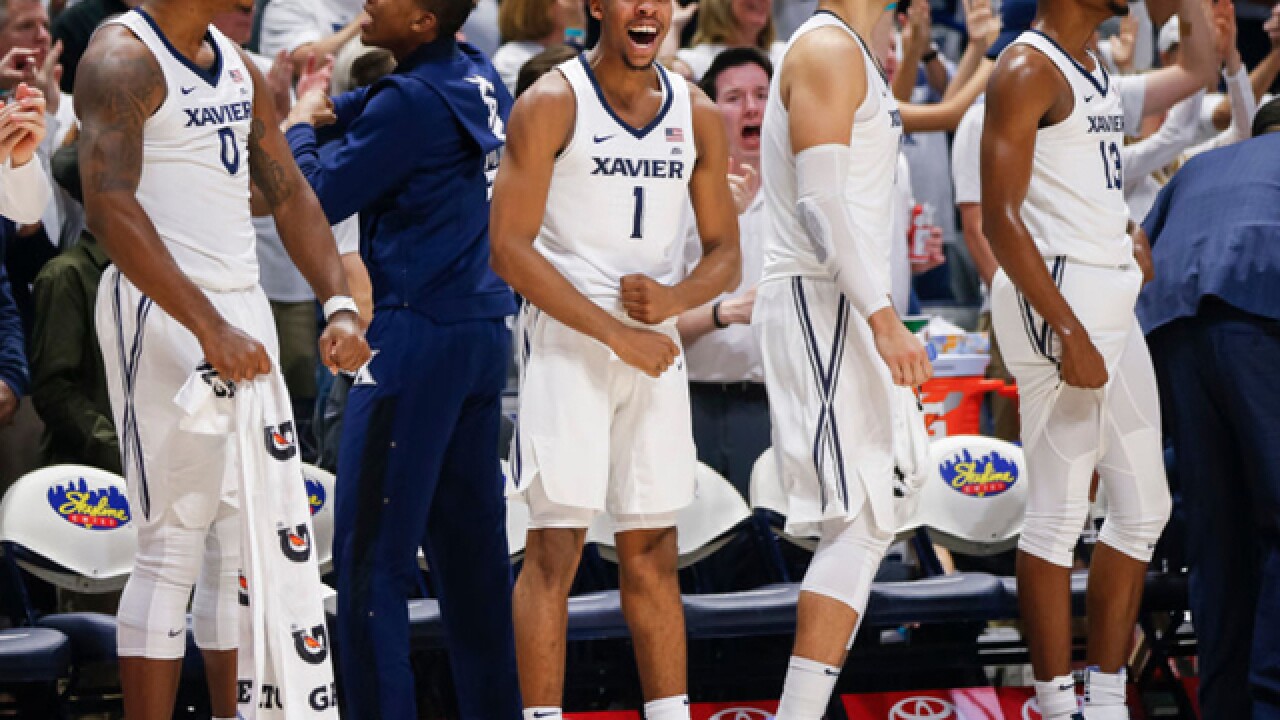 CINCINNATI – Post-game frustrations took center stage after Saturday’s Skyline Chili Crosstown Shootout, but the biggest headline of the afternoon was No. 21 Xavier’s 89-76 victory over No. 11 Cincinnati before a Cintas Center record crowd of 10,817.

Elated Musketeers embraced and greeted fans after thwarting UC’s bid to win its first Shootout at Xavier since 2001.

Not only did Xavier (7-1) spoil UC’s undefeated start (7-1), but it avenged last season’s loss to the Bearcats at Fifth Third Arena.

For Xavier senior Trevon Bluiett, the victory was a long time coming.

“I wanted it bad,” said Bluiett, who scored a team-high 28 points behind five 3-pointers.

Xavier won its 35th straight non-conference game and secured a resume-building victory at the expense of its crosstown rival. Here are takeaways from the win.

1. Will the real Kerem Kanter please stand up?

Kerem Kanter didn’t grow up in Ohio and had no rooting interest in the Crosstown Shootout until leaving Wisconsin-Green Bay to become a Xavier grad transfer. But in the grand tradition of seniors stepping up in the Shootout, he emerged as one of the game’s top players.

Kanter scored 17 points, his most in a Musketeers uniform, including eight straight midway through the first half. The 6-foot-10 forward buried two 3-pointers in the stretch, which erased his 0-for-6 start from the perimeter this season.

“It was my only (Shootout) so I wanted to have a 100 percent winning percentage,” Kanter said. “It was a great atmosphere and I was glad I was part of the rivalry. And I’m going to remember it for the rest of my life.”

Coach Chris Mack said Kanter played well in the preseason but battled a surprising lack of confidence in several early regular-season games. Kanter’s coming-out party was against Hampton (15 points). He followed that up with 12 points against Arizona State.

Kanter is unique as a post player with the ability to stretch defenses, making his perimeter shooting and interior scoring abilities difficult to guard. He appears to finally be finding his footing with the Musketeers, which bodes well for the front court in other big games ahead.

2. It’s all about the rebounds.

Rebounding was the Musketeers’ mission, and it showed in a 44-27 final margin. Led by Kaiser Gates’ 10 boards (to go with his 10 points for a career-first double-double), Xavier limited the Bearcats to five second-chance points.

“We did not let them get an offensive rebound the first four minutes of the game, which, man, that’s all we preached for three to four days in the lead-up. And if you can keep a team like Cincinnati off the glass and take care of the ball…you give yourself a chance to win,” Mack said.

Xavier bested No. 16 Baylor on the boards just days prior. In fact, the Musketeers have only lost one rebounding battle thus far – in the loss to Arizona State in Las Vegas.

With seven players on Saturday contributing at least three rebounds each, the even distribution and consistent patrol of the glass proved to be a major linchpin of the victory. Xavier’s second-chance point total? Nineteen.

The Musketeers are now 7-0 when out-rebounding opponents.

Xavier sharpened its teeth on Wisconsin, Arizona State and Baylor before facing the Bearcats, and that experienced showed. It’s why the Musketeers surged ahead by as many as 23 points, and why they persevered despite scoring as many second-half points as UC (46).

The Shootout meanwhile was the first in a series of quality match-ups for UC. The Bearcats had their way with the likes of Western Carolina and Coppin State before facing XU. The gauntlet of Florida, Mississippi State and UCLA awaits.

Cronin’s concern entering the Xavier game was the Musketeers’ ability to deny UC shots it usually takes, and indeed the Musketeers reframed those options. Kyle Washington never scored. Jacob Evans had just five of his 23 points in the first half.

Cronin said UC let its lack of offense rattle it and defense wasn’t a constant “until it was too late.”

Xavier battled nine second-half turnovers and a scoring drought that allowed UC to creep within nine points in the last 1:26.

Depth, lessons learned against difficult adversaries, and the desire to beat the Bearcats helped the Musketeers stay the course.