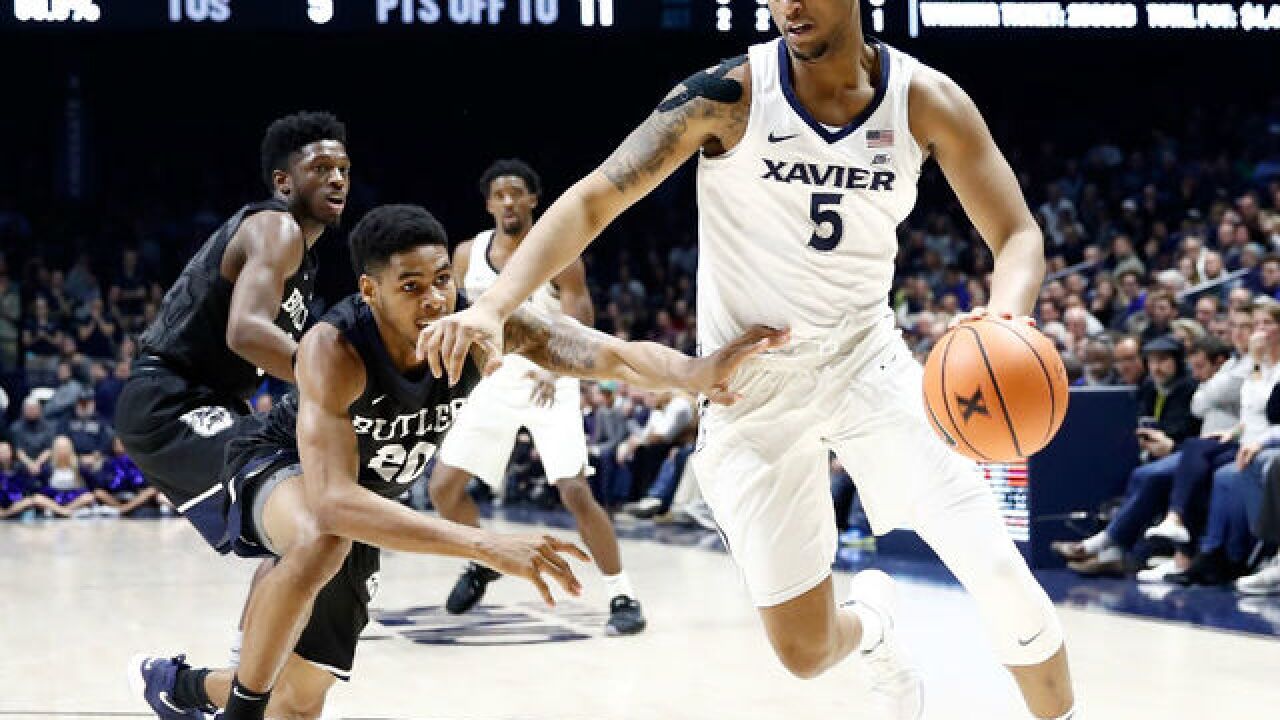 Image copyright 2018 Getty Images. All rights reserved. This material may not be published, broadcast, rewritten, or redistributed.
Andy Lyons | Getty Images
<p>Trevon Bluiett #5 of the Xavier Musketeers dribbles the ball against the Butler Bulldogs at the Cintas Center on Jan. 2, 2018. (Andy Lyons/Getty Images)</p>

CINCINNATI -- Xavier senior Trevon Bluiett didn’t look like himself in the first few minutes of Tuesday’s 86-79 victory over Butler at Cintas Center. Four of his first five shots were off the mark, an uncharacteristic trend for the normally efficient player.

Bluiett noticed it, too.

“I felt like I played a little rushed and sped up on the offensive end, and that’s something I wasn’t doing earlier in the year,” Bluiett said.

From the box score, his early hiccups weren’t obvious: 21 points, a team high, with a team-second seven rebounds. Bluiett moved into fifth place on Xavier’s all-time scoring list, upping his career total to 1,902 points, and slightly increased his team-high season average to 19.8 points.

Now imagine how good Xavier can be when Bluiett starts playing his best ball.

This team, potentially Chris Mack’s best, has the chance to be scary-good come March. The Musketeers (15-1, 3-0 Big East) already operate at an elite level, from winning 10 straight games to all 11 at home thus far.

They’ve tied program records with the No. 5 ranking in the Associated Press Top 25 and No. 4 perch in the USA Today Coaches Poll. They’re No. 2 in the RPI. They beat a Butler team that knocked off former No. 1 Villanova, and they’ve won all three true road games they’ve played.

Balance and depth are part of the formula but the seniors are the X-factor: Bluiett, J.P. Macura and Sean O’Mara. Bluiett, a staple on Big East weekly honor rolls, will go down as one of the top players in program history.

Mack agreed with Bluiett’s post-Butler assessment that he wasn’t yet playing at his highest level and attributed it to a pair of early season injuries. A shoulder ailment afflicted Bluiett for a time, limiting his shooting, and a hamstring tweak affected his conditioning.

“It’s hard. This league…you just can’t walk in and not practice and think you’re going to play well. I thought he had a great practice (Monday). He’s going to get everybody’s best. And if there’s anything that I know about Tre, he’s going to continue to work at it,” Mack said.

Rest comes quickly for Xavier, which has Wednesday off, but there’s little time to spare as Providence awaits Saturday. No. 3 Villanova, four days later.

This season provides some striking parallels to Xavier’s record-setting start in 2015-16. That team erupted to a 16-1 record and ascended to new heights in the polls. Adversity was no stranger -- Edmond Sumner’s scary fall at Villanova, and his exit on a stretcher, was a prime example -- but resilience, talent and teamwork prevailed.

There was a bulls eye on that team. This one, too. Asked whether it felt any different this time around, Macura simply said the team can “never can be satisfied.”

“It’s really important for us to take every practice the same, and work really hard and stick together,” Macura said. “I think we took our foot off the gas a little bit two years ago and I think that this group is really going to push each other. And we’re going to work together to try and make a run.”

The loaded Big East provides chance after chance for the Musketeers to sharpen their skills, and even in the early going they stand out. XU is the only 3-0 team in the league, and Seton Hall (2-0) remains the only other Big East club without a conference loss.

Credit is due to the Musketeers’ coaching staff, a group that largely has remained intact year-in and year-out. Ninth-year coach Mack is win away from tying Pete Gillen for the most coaching victories in program history (202).

With home sellout crowds on tap for the rest of conference play and multiple Top 25 opponents in the conference schedule, the Musketeers should be among the country’s best-prepared teams in three months’ time.

And when Bluiett starts playing to the best of his abilities? Hang on for the ride.