Russell: Freshman Naji Marshall has made an instant impact for the Xavier Musketeers 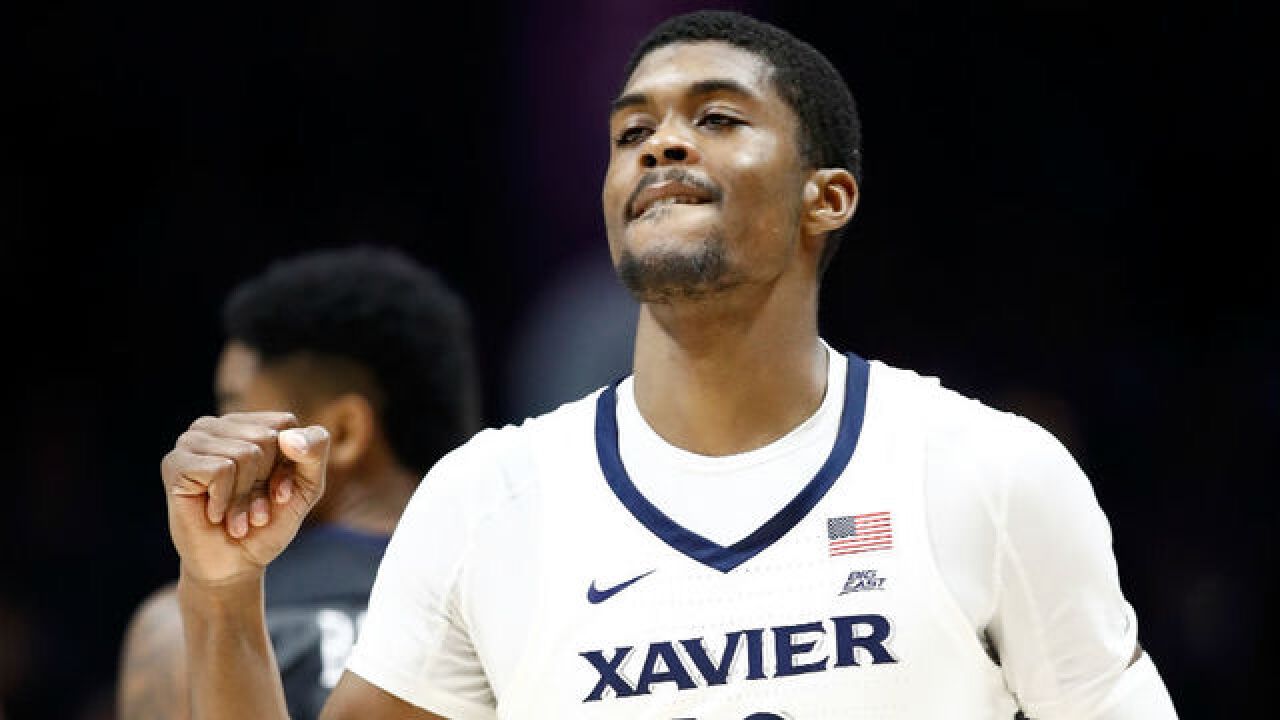 Image copyright 2018 Getty Images. All rights reserved. This material may not be published, broadcast, rewritten, or redistributed.
Andy Lyons | Getty Images
<p>Naji Marshall celebrates after the 86-79 win over the Butler Bulldogs at the Cintas Center on Jan. 2, 2018. (Andy Lyons/Getty Images)</p>

“I want you to acknowledge that this is the head honcho,” Gates said, grinning and nodding at Marshall. “It’s a saying we have. A honcho’s a leader. So, head honcho.”

It may have been a joke, a way to needle his rookie teammate, but Gates’ words carried some weight. Marshall started the Creighton game -- a reward for his hustle on the glass and defensive intensity in Xavier’s recent loss at No. 1 Villanova -- and he scored 10 points in 26 minutes against the Bluejays.

The 6-foot-7 wing averaged 11.5 points, 2.5 rebounds and 1.5 assists in the Musketeers’ 1-1 week versus two ranked opponents. He was two days away from earning Big East Freshman of the Week honors.

In that moment though, Marshall was most occupied the win over Creighton, the end of Xavier’s two-game skid, Gates’ joshing and a couple on-the-record questions. Such as: What does he want to improve on the court before the season’s end?

“I just want to keep getting better overall in my game, period. I think on the offense, sometimes I rush it. I make plays harder that are really easy, like landing on two feet, pulling up for a jump shot, shooting over small guards,” Marshall said.

Marshall has made an impact thus far with his high-flying athleticism, defensive anticipation and offensive tenacity. Although turnovers borne of ill-advised passes have at times reaffirmed his rookie status, Marshall also has competed with the poise of a player ready for the college game.

In 19 outings, he has averaged 7.7 points while shooting 56.4 percent from the field and grabbing 3.4 rebounds. He scored a career-high 15 points against East Tennessee State University but one of his most memorable plays came at Northern Iowa.

Marshall stole the ball with three seconds left, dunked it, and held a finger to his lips with a “Shhhh!” to Panthers fans.

“Northern Iowa is a good team. The crowd, they were getting into it and yelling at us. I just wanted to dunk it and (silence the noise),” Marshall said.

He saw subsequent chatter about it on social media and thought it was “pretty cool” that he, a freshman, received “a lot of publicity on Twitter.”

Marshall’s recruitment took flight before that, though, on the heels of a senior year high school state championship. Marshall led Eleanor Roosevelt to the Class 4A title and had a breakout summer on his AAU team, DC Premier, which is part of the Under Armour circuit.

Three national recruiting sites rated Marshall a four-star prospect. ESPN tabbed him as the 20th best player at his position in his class.

“He really values the defensive end, which our team needs. He also brings a versatility on the wing that I think can be really disruptive. We haven’t had a stopper on the wing maybe since Remy Abell. And Remy had his shortcomings because he had short arms. He was like an alligator that played hard. But not Naji, man. He’s long and he really values that. That’s great to see. Our team needs him,” Mack said.

Paul Biancardi, ESPN’s national director of recruiting and player rankings, included Marshall among his 12 Sleeper Freshmen picks in October. Marshall went 4-for-4 for 12 points with four rebounds in his collegiate opener against Morehead State in November.

Despite the year at prep school, Marshall worried that his transition to college in Ohio would be difficult. He said it has gone “way better” than he imagined because of tutors that help him with academics, because his teammates are a tight-knit group, and because he likes the coaching staff.

He still misses his family, especially his mother, Rayna Whitted.

“I’m a mama’s boy,” Marshall said, smiling. “I talk to her every day. I just texted her after the game was over. She said good luck and something like, ‘Shoot a pull-up jump shot.’ She was mad at me about something.”

Marshall’s dad, Maurice Marshall, was a professional boxer before becoming an engineer. Marshall said in his Xavier media guide profile that he wants to be an engineer someday, too, specializing in gaming.

For the time being he’s enjoying his freshman campaign. His teammates seem to enjoy him equally.

The moment Gates disappeared during Marshall’s post-Creighton interview, freshman Paul Scruggs appeared. He held up his cell phone, acted like he was recording Marshall’s quotes and nodded in agreement with his answers.

So Naji, how about that Paul Scruggs? What do you think of him?