Russell: Back to winning, can Bearcats avenge last year's loss to UCLA? 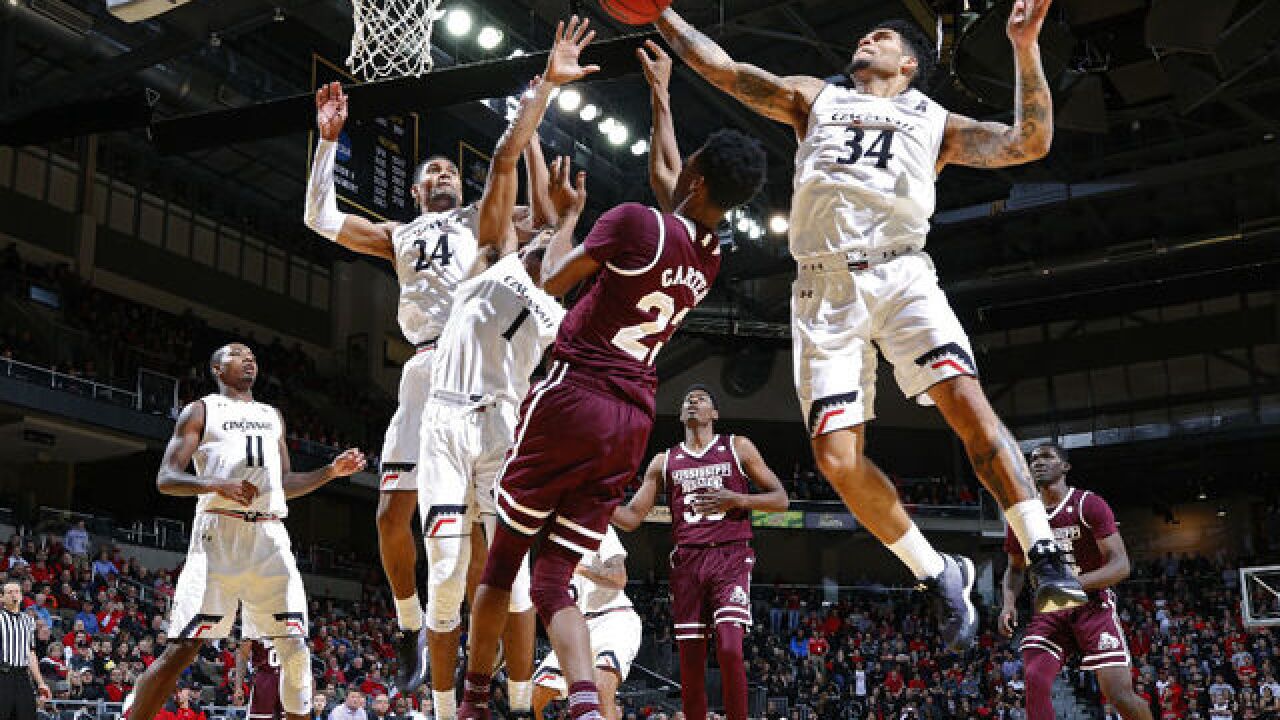 Image copyright 2017 Getty Images. All rights reserved. This material may not be published, broadcast, rewritten, or redistributed.
Joe Robbins | Getty Images
<p>Jarron Cumberland #34 and Kyle Washington #24 of the Cincinnati Bearcats defend against Tyson Carter #23 of the Mississippi State Bulldogs in the second half of a game at BB&T Arena on Dec. 12, 2017 in Highland Heights, Kentucky. Cincinnati won 65-50. (Joe Robbins/Getty Images)</p>

HIGHLAND HEIGHTS, Ky. -- For the University of Cincinnati’s men’s basketball team, Wednesday is a day of rest.

No practice. No film sessions. No instruction. Zilch.

After three emotional games in a row -- back-to-back regular-season defeats for the first time since December of 2015, followed by Tuesday’s 65-50 triumph over formerly undefeated Mississippi State at BB&T Arena -- coach Mick Cronin said the Bearcats (8-2) deserve a break.

The accolades that heralded this season’s start have taken a beating. A UC team hailed by some critics as the “best” in Cronin’s tenure was outplayed by Xavier in the Skyline Chili Crosstown Shootout at Cintas Center and fell to Florida on a neutral court.

The Bearcats started this campaign ranked 12th in the Associated Press Top 25. They ascended to No. 11 before tumbling to 17 and, most recently, 25.

Social media, of course, can be a wicked place after a loss or two. The effect on players was Cronin’s biggest concern in the aftermath of the two defeats, and a big reason why a victory over the Bulldogs was crucial.

“The hardest thing in this day and age is keeping your guys focused and together after a loss because the world is coming to an end.”

Practices after the Florida defeat became exercises in learning from mistakes and looking toward the future. It was time to get “back to being the Bearcats,” junior Jacob Evans said, and that meant defensive toughness and relentless effort.

UC displayed both against Mississippi State.

Coach Ben Howland was caught off guard by the frequency of zone defense UC played and described the Bulldogs as “really inept” in attacking it. The Bearcats held Mississippi State (8-1) to a season-low point total and 30.2 percent shooting with two long field goal droughts.

An 0-for-10 stretch in the first half was overshadowed by an 0-for-14 marathon in the second. UC’s half-court stinginess generated 11 blocks and forced the lion’s share of Mississippi State’s 16 turnovers. The Bulldogs surrendered 22 points off miscues.

Just wait until next year, Cronin cautioned, when that youth-laden team hosts the Bearcats. Howland’s glut of freshmen and sophomores will be seasoned.

Regardless, Tuesday’s win was immensely valuable for the Bearcats’ resume by virtue of Mississippi State’s perch at No. 31 in the RPI. Based on a new quadrant system the NCAA selection committee rolled out this season, the outing meets Quadrant 2 criteria as a home win over a team ranked 31st to 75th in the RPI.

The new system features four quadrants in descending order and places significant value on road and neutral games. That makes the Bearcats’ other Top 50 RPI win -- over Wyoming in Grand Cayman -- even more coveted. It falls in Quadrant 1 as a victory over a 1-50 RPI team on a neutral court.

UC has a big chance for another quality win Saturday at UCLA. The Bruins are 97th the RPI and could account as another Quadrant 2 victory. A defeat of UCLA also would give the Bearcats their first true road win this season.

UCLA knocked out UC from of last year’s NCAA tournament, adding a potential subplot, but Evans said it’s a new season and a new Bruins team. Steve Alford’s group, which received votes in both national polls this week, recently lost in overtime at Michigan and remains undefeated at home.

“We know we just have to be ready to go into the lion’s den, as Coach would say,” Evans said.

While the Bearcats took a step forward by returning to the win column Tuesday, they must play better at UCLA if they’re to return home victorious.

One key for UC will be shoring up its work-in-progress offense. The Bearcats haven’t found fluidity without the graduated guards Troy Caupain and Kevin Johnson, often stumbling while trying to adjust to an offense tailored to the current backcourt. Passes have been late and turnovers have been frequent as players have navigated new territory.

“But I wouldn’t just point to our turnovers,” Cronin said. “I would point to our field goal percentage as well as overall offensive efficiency. The KenPom (points per possession) is an area we have to improve.”

UC’s chance to reassert itself comes at 3:30 p.m. Saturday in Los Angeles. As the Bearcats continue their identity-finding mission, the lessons learned in the first 10 games may be the elixir for a long and successful season.