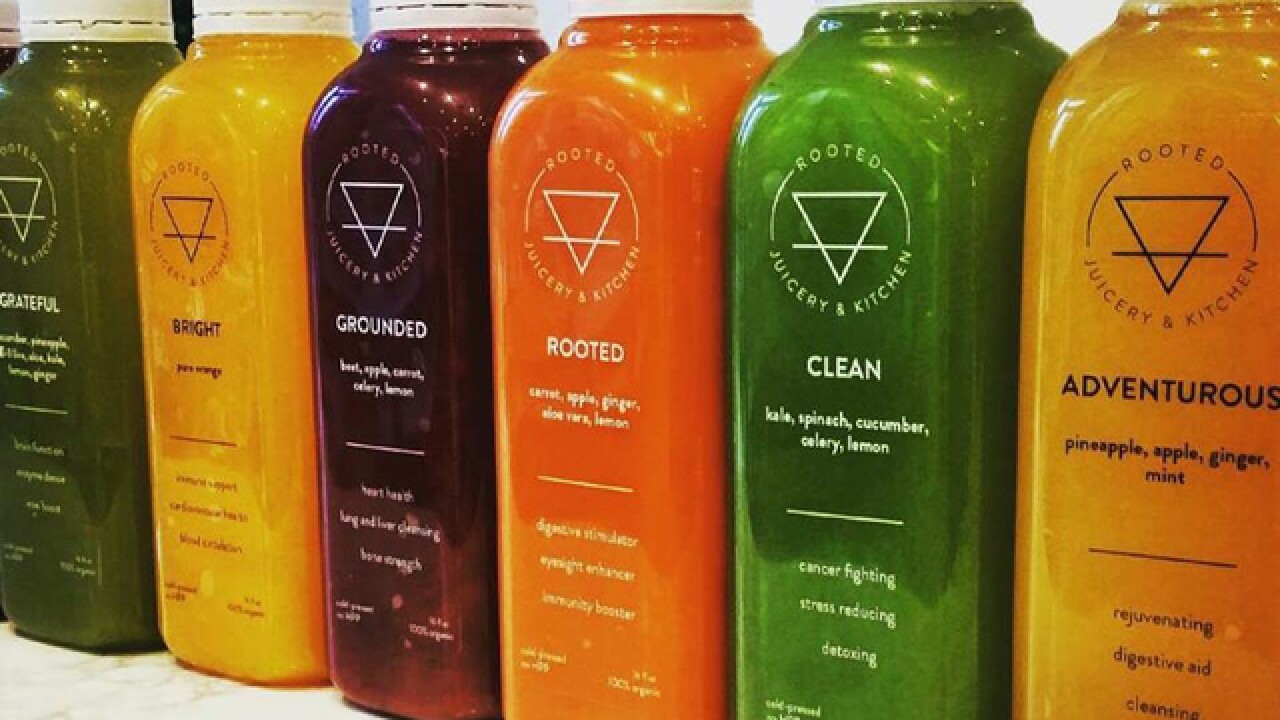 Copyright 2017 Scripps Media, Inc. All rights reserved. This material may not be published, broadcast, rewritten, or redistributed.
Liz Engel | WCPO contributor
<p>Rooted Juicery & Kitchen is expanding for the third time, this time to Downtown Cincinnati.</p>

CINCINNATI -- An Oakley business that specializes in plant-based foods and juices has expanded for a third time in less than three years -- this time with a Downtown store that promises some new, health-inspired twists.

Rooted Juicery & Kitchen debuted its newest digs at 17 E. Sixth St. in the Central Business District on Nov. 20. Although the spot will cater heavily to the work crowd with its normal array of grab-and-go goodies such as salads, sandwiches, soups, juices, smoothies and acai bowls, it also boasts a coffee and elixir bar, firsts for the fast-growing business founded in 2015.

Drinks include espresso, cappuccino, a charcoal latte and cold brews; remedies, or non-coffee-based drinks and teas; and a full matcha, or green tea, menu that includes matcha lattes, matcha shots and matcha lemonades.

Customers can also add an array of superfood boosts such as blue majik, hailed for its anti-inflammatory properties, or maca, an energy enhancer, said Rooted owner and founder Megan Tysoe.

"We're really taking traditional drinks and finding ways to add our twist to them," Tysoe said. "I think that's another thing that really differentiates the store."

Rooted's smoothies, cold-pressed juices, nut milks, raw desserts and food products are all organic and made in-house from scratch -- and Tysoe plans to expand on that concept, too, with the food Downtown. Rooted will serve toast and bagels, including a charcoal version served with a side of vegan cream cheese, but will add new selections, such as a superfood porridge and matcha waffes.

"We're kind of testing those items," Tysoe said. "We still want food that can be prepared quickly but is still the highest quality. We've been really excited with how people have been responding so far."

Rooted is partnering with Pendleton's Urbana Cafe to implement its coffee program. Newcomer Prospect Jam Co. is providing the preserves.

Fern, a plant shop based in College Hill, aided in the store's design, which leans heavily on succulents and greenery.

"Obviously, everything we do is plant-based, so that really fits with our brand," Tysoe said. "When you walk in, I want you to feel the same way the food makes you feel: clean, energized, happy, grounded but also welcome. For the Downtown store, I also wanted it to be a little bit unique, modern."

It's Tysoe's third store in less than three years. The Cincinnati native, who earned her business degree from Georgetown University, quit her corporate gig in NYC investment banking to pursue her passion for healthy eating. She attended the Natural Gourmet Institute, a plant-based culinary school, and interned at a vegan, plant-based, organic, raw-food restaurant in Florida before deciding to move back to Cincinnati to open her own outfit.

Rooted debuted in Oakley in July 2015, and Tysoe opened a satellite store in Mariemont the following April.

The Downtown location neighbors GNC, Panera and Zablong Pizza, as well as the backside of Rock Bottom Restaurant & Brewery.

"It was probably the most requested spot that we got for the third store," Tysoe said. "Being Downtown means a lot to us with everything going on in the city, and the energy down here is great. It's really fun."

Tysoe said there aren’t any current plans for further expansion, despite similar appeals from customers to add stores in Northern Kentucky, Kenwood and West Chester. For now, the focus will be settling into the new norm, and traffic Downtown has been strong so far, she said.

"It's definitely been quick growth for us, but it's been in the right way," she said. "We're just so excited. Personally, I think the shift to healthier eating and (eating) plant-based foods isn't a fad; it's really a shift. I'm excited to see where it goes next."