First-come-first-served event is this Saturday 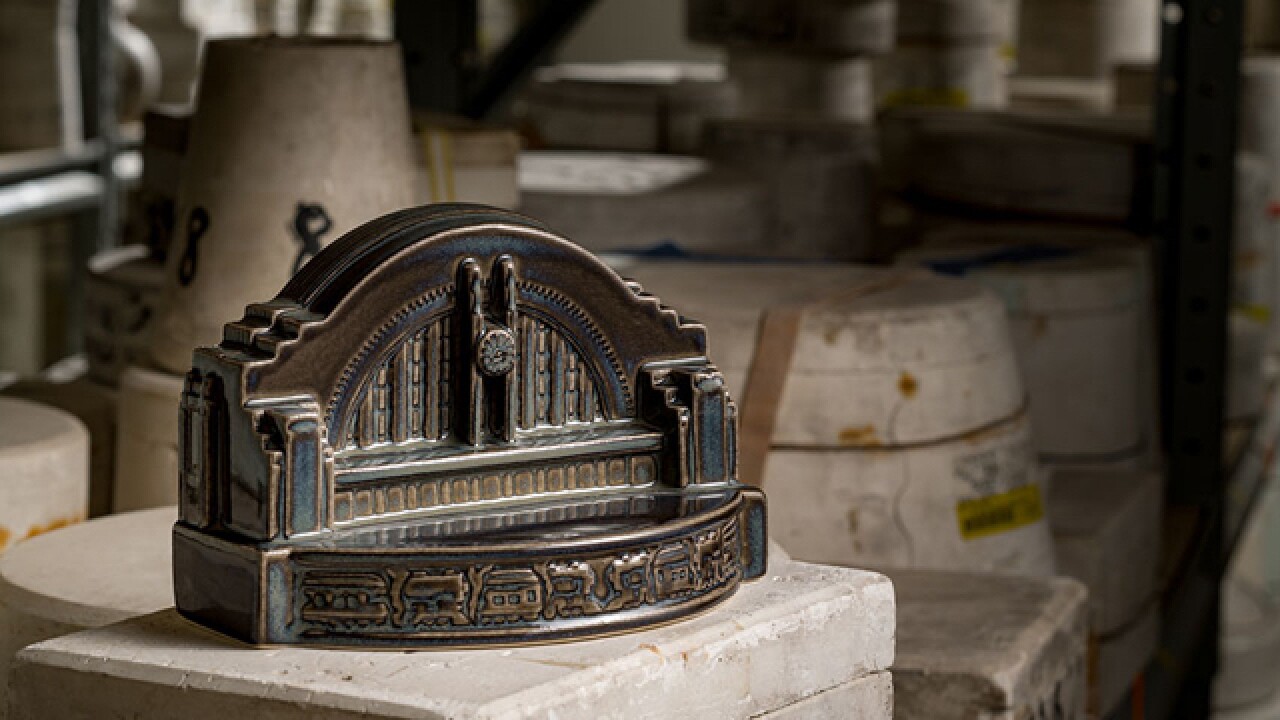 Copyright 2018 Scripps Media, Inc. All rights reserved. This material may not be published, broadcast, rewritten, or redistributed.
<p>Provided by Rookwood Pottery.</p>

CINCINNATI -- It has been six years since "Antiques Roadshow" came to Cincinnati and 31,000 people learned they wouldn't get a free appraisal of two of their antique and collectible possessions.

Those art pottery owners who were not among the 6,000 lottery winners for the 2012 PBS shooting will have a second chance from 10 a.m. to 2 p.m. Saturday when Rookwood Pottery will offer free appraisal of up to five pieces by 22-year "Roadshow" appraiser and Cincinnati auction gallery director Riley Humler. The pottery is located at 1920 Race St., in Over-the-Rhine.

The first-come-first-served event is unusual for Cincinnati's 138-year-old pottery and signals a new direction for the company: to link its glorious past with its emerging present.

Vintage and new Rookwood will be on display -- and for sale -- and Rookwood's resident historian, George Hibben, will be there to provide perspective on the company's leadership in the original American art pottery movement and its revival.

It's a rare chance, Hibben said, to find out if Grandma's vase you inherited is worth more than the $15 she paid for it 50 years ago or if the fireplace surround in your 1921 home is Rookwood or not.

"Of course, we'd like to see a lot of Rookwood pieces, but we're hoping to help find something that's a diamond in the rough." Hibben said.

It hasn't happened yet to Hibben, who started collecting art pottery in 1988 after an "Antiques Roadshow" moment happened to his secretary. She bought a 50-cent piece of Rookwood at a yard sale that the Cincinnati Art Museum appraised at $5,000.

"When I heard that story of a local find, my curiosity piqued, and I started educating myself about this wonderful local thing called Rookwood pottery," said Hibben, a veteran Rookwood employee who specializes in beer steins and leads tours of the pottery's manufacturing plant.

Humler, who said he has handled and sold more Rookwood pieces than anyone in the world, bought his first piece of Rookwood 46 years ago in his hometown of Louisville. The first live appraisal he witnessed was one he conducted while working at Cincinnati Art Galleries, above which is the East Sixth Street Humler & Nolan auction house.

Misunderstanding value "continues today when people don't take the time to find out what their pieces are worth," he said.

Saturday's Rookwood event welcomes all types of pottery, not only Rookwood, which is just one of many prolific Ohio clay belt potteries active in the late 1800s through the 1950s. Those who own art tile fireplaces, bathrooms or water features can bring in pictures to show Humler, Hibben said.

After a more than 55-year absence from Cincinnati, where Rookwood was founded in 1880 by Maria Longworth Nichols (later Storer), the company returned to the Queen City in 2006. It began creating new and archival products that were based on its collection of vintage molds created by early greats such as Kitaro Shirayamadani, John Dee Wareham, Louise Abel and William McDonald. Some of those molds also will be on display Saturday.

The company, which produces both art pottery and architectural tile, has faced stiff national competition during its comeback. Its product line has ranged from original and production vases and funerary urns to sports trophies, holiday ornaments and animal figurines, all featuring glazes created by its staff artists.

"We want to marry our beautiful forms with beautiful glazes," Carroll said, adding that the company's goal is to relaunch the Rookwood brand "onto a national stage. We're posturing to be what Rookwood was -- a powerhouse, an American company that produces goods you can't find anywhere else."

Buyers of new Rookwood will see future forms, some which reshape archival ones, as well as a new heritage line of utilitarian pieces such as plates and serving ware, Carroll said.

"We are focused on putting art back into Rookwood," he said. "We want to rock the boat a bit, using values that are both traditional and modern."

Saturday's event, Carroll said, will put that goal in focus and allow millennials, gen-Xers, baby boomers and echo-boomers to experience an iconic local business. Hosting a "Roadshow" appraiser is key, he said.

"(Humler) is kind of 'the man' in terms of putting any context into what Rookwood is all about," Carroll said.

For more details, visit the event page on Facebook.