And it keeps stuff out of the landfill 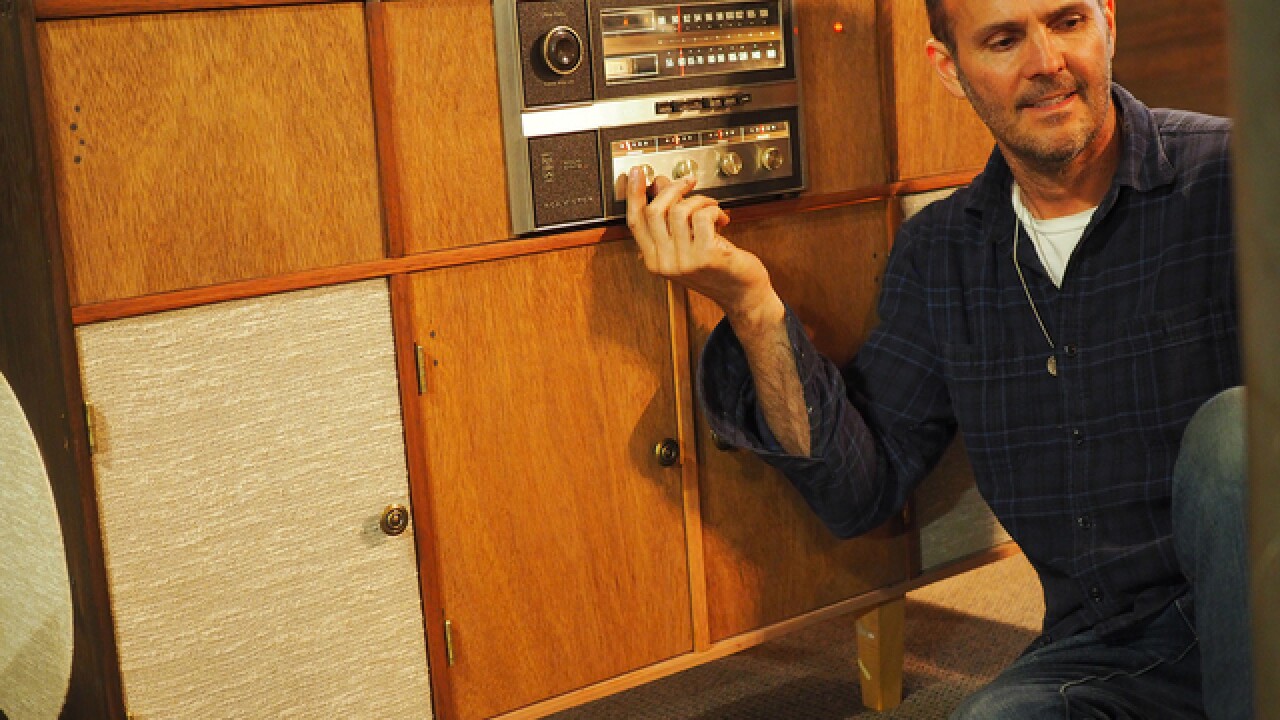 CINCINNATI -- David Rueve and the 1960s-chic hi-fi console he crafted from recycled parts are ready to be auctioned at a May 19 fundraiser cleverly titled ReUse-apalooza Designer Challenge.

The annual Easterseals event benefits its wroker development programs, including Building Value in Northside where the challenge will take place.

Here's how it works: Professional and amateur recyclers and up-cyclers like Rueve were credited with $125 to shop Building Value's Northside retail shop, which is filled with salvaged construction and household items. Their challenge was to create any kind of wall art, light fixture, decorative item or furniture that fits on a 4-foot-square pallet.

All projects were due at Building Value by May 8, a deadline the four-time participant Rueve met with weeks to spare.

"It was a mess when I found it," Rueve said of the hi-end RCA Victor cabinet hi-fi he recycled. "And it took some work. But now everything works -- AM/FM/AFC, phono, tape (which is now set up for iPod, etc.), lights, all tone controls, all eight speakers," Rueve said. "It sounds amazing. I mean really good."

Rueve said he's happy his girlfriend nudged him toward a project involving electronics.

"She said, 'You should build something with a record player in it,' " Rueve explained. "You know, record players are really hot. I thought I could put it in a mid-century cabinet that wasn't too heavy to carry away, that would be desirable.

"Hopefully it will go for a good price and make a good contribution to the cause."

The "cause" is Easterseals programs like Building Value that helps people develop skills that will land them a full-time construction job. Building Value's three- to nine-month program puts people to work dismantling buildings and provides them a minimum wage. The program, Rueve said, also helps participants with housing and transportation.

Pam Green, president of Easterseals, said that 86 percent of the program's participants land full-time jobs. It also helps keep hundreds of thousands of pounds of building materials out of landfills, according to Building Value.

ReUse-apalooza is held under a tent set up on Building Value's parking lot at 4040 Spring Grove Ave. The funky event includes valet parking, food, drink, live music and dancing and culminates with the auction. New this year will be a People's Choice Award dubbed "The Hammy."

Rueve's not counting on winning the hammer-titled award, but he hopes his hi-fi pulls a big price -- $200 would be good, he said, but $700 would be better -- and he knows he's going to have a blast at ReUse-apalooza.

"It's a fundraiser, but it's also a great party," Rueve said. "Once you go, you'll go again next year. It's a real good mixer with a lot of interesting people. You make friends you see at the same party that you otherwise wouldn't cross paths with -- and you catch up with them."

"The challenge helps draw people to Building Value and show them how a corroding panel could become a beautiful bar. We had some really competitive bidding last year. We had some great pieces," Dyehouse said.

Rueve used part of his $125 allowance to buy a 1967 RCA Victor hi-fi cabinet that originally cost "north of $700" and "weighs as much as a gorilla." Much lighter was a custom-made plywood cabinet in Building Value's inventory. He picked out vintage curtain fabric to face two of his new cabinet's four doors and the round openings for the bass speakers on the ends.

Rueve disassembled the Victrola console, preserving everything, even the screws. He removed and recycled its electronics, including the turntable, amplifier, two 15-inch woofers, two tweeters, two mid-range speakers and two horn speakers.

In the process, he came across some curious stuff. Inside the console was a civil defense-preparedness card and two small mug shots of an unknown man that likely were intended for some kind of identification badge. Rueve said he hoped to integrate them all into his design.

A native and current resident of Clifton, Rueve earned a business degree from the University of Cincinnati. As the son of an electrical engineer who saw hi-fidelity music systems evolve in the 1950s, Rueve picked up a lot of tool skills as a boy.

He said he became enthralled with Volkswagens in his youth and worked on many a Beetle, bus and Karmann Ghia. He owns and operates Auto Foreign - Bosch Car Service and Metro Scooter at Dana Avenue and Montgomery Road.

Rueve said he has been "repurposing stuff probably my whole life" and discovered Building Value 10 years ago. He likens it to "a thrift store for building materials" and has recycled several purchases made there for his own home.

If you want to build or replace something in your home that has to match what's original "you can find it there," Rueve said of Building Value. "You might have to make a couple of trips, but you can find it."

"My philosophy is that it's like a thrift store. If you take from the system and don't put back into it, it doesn't work. ReUse-apalooza is one way to put back so it can work."

Tickets for ReUse-apalooza cost $35 and can be purchased online or at the door.