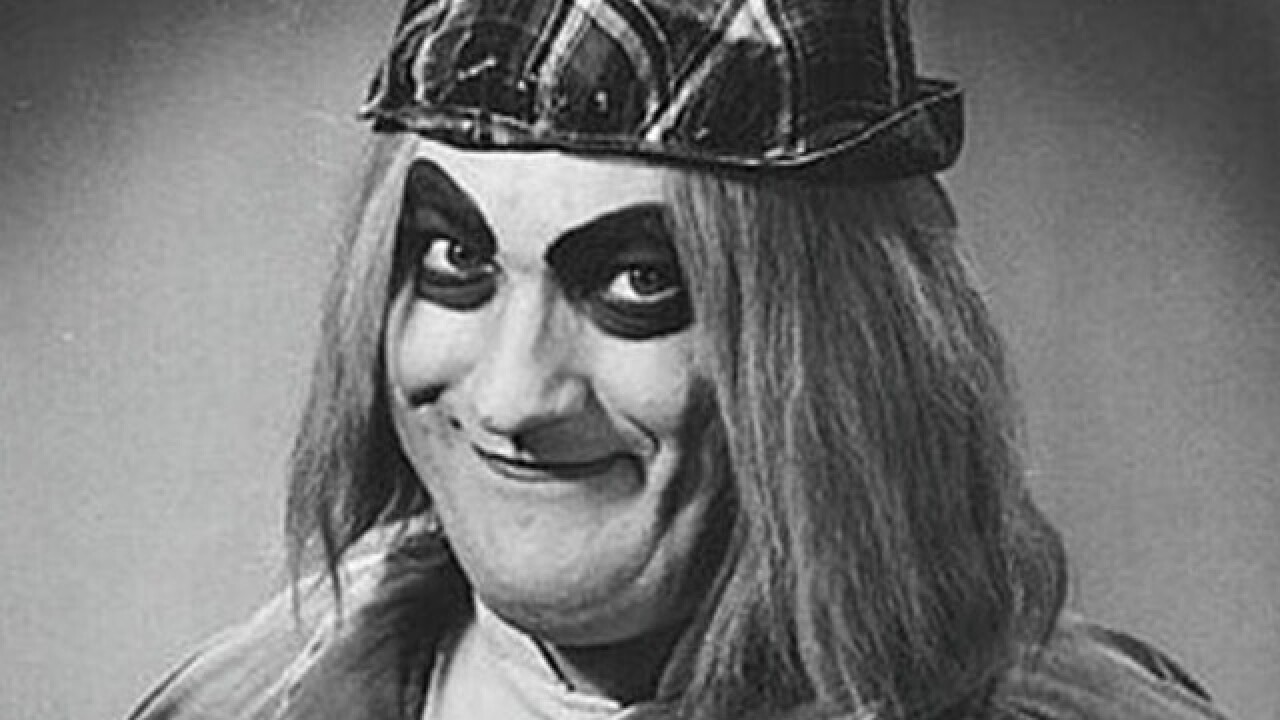 CINCINNATI -- In the early days of television, the Queen City produced an impressive assortment of local television stars. Alongside legends like Paul Dixon, Uncle Al, Bob Braun and Skipper Ryle, Cincinnati had the goofy and lovable Cool Ghoul.

He was easy to identify by his orange-tinted wig, pale complexion, smokey eyes, wool cap, red cape and ever-present tongue flipping that created his trademark sound. It was sort of a cross between blowing a raspberry and saying blah-blah-blah really fast.

Just ask any Cincinnatian of a certain age to imitate it. They will know.

The Cool Ghoul was a character created by Dick von Hoene of Price Hill. He got his start on WCPO radio in the early 1960s on a show called “Bob Smith’s Monster Mash,” playing a silly and not-so-scary ghostly guy.

In the early 1970s, he gave his radio persona a human look when he brought the character to Cincinnati’s newest television station, WXIX, for a show called “Scream-In.” The show featured classic horror films from the 1940s and 1950s with the campy Cool Ghoul introducing the movies and giving small doses of comedy and music leading into commercial breaks. The live show, with no staff writers, featured jokes and skits Von Hoene created and performed off the cuff.

The show ran on Saturday nights for only three-and-a-half years, but the Cool Ghoul lived on.

Cincinnatians will remember seeing the Ghoul at events like Reds Opening Day parades and making appearances at Coney Island, LeSourdsville Lake Amusement Park, Holiday on Ice and on television specials through the years.

His daughter Vanessa von Hoene Ives, 43, lives in Cincinnati and remembers her classmates being fascinated when she brought her dad to show-and-tell at Covedale Elementary.

“He loved to perform,” she said. “But he always felt very blessed and humbled that his character turned into four decades of work.”

Her dad always referred to The Ghoul in the third person, to clarify that it was a character he played, not who he was.

“When people would stop him on the street when he was out of costume, he would always say hello and was friendly, but he did not speak in the Cool Ghoul voice unless he was in makeup.

His career led to stints as a substitute teacher, then back in front of the camera as a reporter at WXIX, then on to news director for that station and, later, at Storer Cable.

In addition to news director, he also hosted “Northern Kentucky Magazine” for several years in the late 1990s. He interviewed myriad guests on that show, from big names like Chubby Checker to spokespeople promoting local organizations and events. His daughter said everyone wanted to be on the show because it was not scripted and he made people feel like they were in his living room.

Von Hoene grew up on the West Side and earned a bachelor’s degree in history and a master’s degree in theater from the University of Cincinnati.

“He was a very strict father, always enforcing rules and manners to my sister and I,” said von Hoene Ives. “But he did teach us about makeup, since he wore more than my mom.”