Remember This: For decades, WEBN ruled this town, and its popular T-shirts were must-have apparel 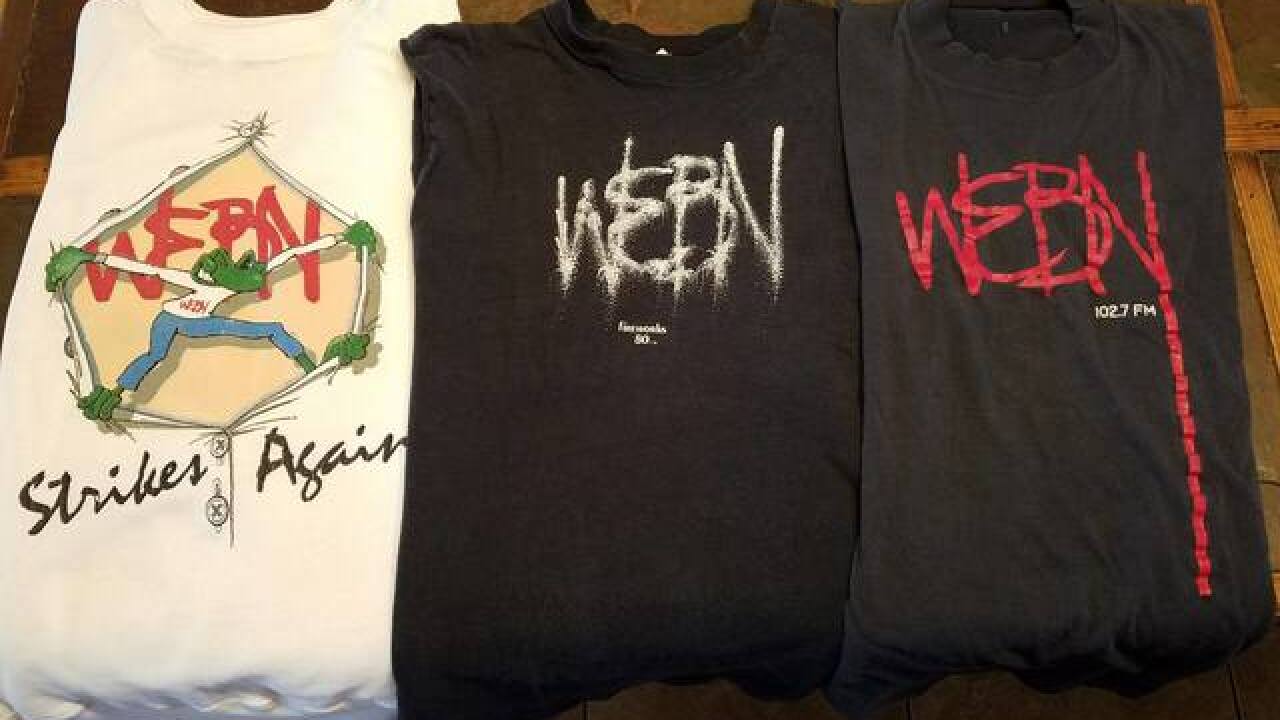 Copyright 2017 Scripps Media, Inc. All rights reserved. This material may not be published, broadcast, rewritten, or redistributed.
Provided
<p>David Williams has lived in Arizona for years but occasionally wears one of his WEBN shirts. (Photo provided by David Williams)</p>

CINCINNATI -- Sometimes a shirt is just a shirt. Other times, it's so much more.

There was a time when WEBN T-shirts were part limited-edition, must-have apparel; part creative graphic entertainment that was highly anticipated for months; and part cultural signifier that said, "I get it. I'm in the club."

That vibe extended to its wildly popular shirts; for years, the station issued at least three new versions annually -- a spring edition, a fall one that commemorated the Riverfest fireworks bash, and a winter version. Each shirt was sold for only six weeks, and when they were gone, they were gone.

Ritter oversaw everything for the T-shirts and other products, including creative direction, building and working with a retail distribution network, purchasing directly from textile mills, working with printers, and more. So deeply was he involved in the WEBN garment phenomenon (which eventually included hats, jackets and more), everyone at the station simply called him by the nickname Garmento.

"I used to go to a lot of trade shows, and people were always surprised that a radio guy would care so much about the details of screen printing and textiles and so on," Ritter said. "But that's how we attacked everything; we wanted everything at that level of creativity and performance -- advertising products, revenue products, garments. We were truly a different kind of radio station."

It's hard to imagine any local radio station anywhere having the kind of clout these days that WEBN had in Cincinnati in the 1970s, '80s and even into the '90s. After all, stations are largely owned by mega-corporations these days and run from far-away cities, their music programmed by metrics and formulas instead of the instinct of disc jockeys with their pulse on local tastes and tolerances.

Founded in 1967 by Frank Wood and programmed and run by the Wood family for years, WEBN was a cultural phenomenon, from its boundary-pushing contests to events like the April Fool's Parade or Kite Fly to the nationally recognized fireworks show that jams both sides of the Ohio River every Labor Day weekend.

For Jay Gilbert, who worked for the station for 38 years and was beloved for his smart, smart-ass commentary, there was nothing else like it.

No one is sure quite which T-shirt was the station's first, but Gilbert figures it was in the early '70s, and the shirts were handmade silkscreen versions made in someone's house. The shirts didn't yet feature Frog, the troublemaking amphibian with no name but endless smirks and attitude. He made his way onto a shirt in the '70s to "sell" Tree Frog Beer (the station's fictional brew that "doesn't taste like much but gets you there quicker") and eventually became WEBN's official mascot, Gilbert said.

In the summer of 2000, WEBN recorded the above promotion for its latest T-shirt. Longtime station employee Jay Gilbert's daughter, Lisa, is singing.

Frog became so popular that WEBN even ran him for Cincinnati City Council in 1975, and he garnered enough write-in votes to mess up the vote tally. He was featured on every shirt from '82 on, said Ritter, wreaking havoc with a devilish gleam in his eyes.

"The 'action' was always either anticipated or had just happened," he said. "He was dragging a match or about to detonate dynamite."

A favorite shirt for Ritter featured Frog in front of a mantel at Christmas holding a musket, with Rudolph mounted on the wall.

For WEBN listeners, the shirts sent a message that the wearer was in on the music and the madness. Many fans collected every shirt and had drawers full of them.

Deer Park native David Williams started listening to WEBN in 1971 or '72, after getting out of the Navy, and had his share of shirts over the years. He still owns a T-shirt and sweatshirt that he busts out occasionally where he lives in Glendale, Arizona. No one there takes note of the significance of the shirts, but he knows.

"The station was just so creative back then. Jay Gilbert had a brilliant sense of humor," said Williams. "It was a huge part of the local culture, and the shirts were a shorthand that you were part of it."

Unlike Williams, John Calhoun had never heard of the station while growing up.

"I was a black kid in Walnut Hills listening mainly to R&B," he said.

Neither rock 'n' roll nor WEBN was on his radar, but after high school he fell in love with both. Today he counts Rush, Led Zeppelin and Pink Floyd as his favorite bands, and he is the proud owner of a pretty rare WEBN T-shirt, likely from the early '70s, featuring a hot air balloon image that was part of lots of early promos and visuals for the station. Calhoun no longer wears the shirt, worried that he'll rip it in its fragile state, but he won't ever get rid of it.

"I like Cincinnati history," Calhoun said. "When I saw that hot air balloon design, when a friend was giving the shirt away, I thought, 'I better get that.' "

Gilbert has cartons full of WEBN shirts in his basement, sometimes to his wife's consternation. The most rare one he's aware of is a bright yellow cicada-themed shirt from around 1987, which he wore years later to a fireworks anniversary bash and got lots of feedback.

Perhaps oddly, Garmento himself never wore and has never owned a single WEBN shirt, thanks to Ritter's fear of messing up the voodoo (not unlike a baseball player refusing to change his lucky socks). Over the years, WEBN won plenty of awards for the creativity of the shirts and the promos surrounding them, Ritter said, and the station even won national recognition for its processes and quality.

"Impressions" magazine, for example, once recognized the station for a printing innovation. And there were some years that the station's revenue from the shirts was more than some station's total revenue, he said.

WEBN's promotions for its shirts drew as much attention as the shirts themselves. Click above to hear an ad from the summer of 1999, when the world feared "Y2K."

Still, that's not what it was about for Ritter, Gilbert and the others who loved the station and its irreverent shirts.

"Frank Wood always said the most important piece of equipment at a radio station was a typewriter -- it's what you did between songs, the creativity, that keeps people there," Ritter said. " The T-shirts were part of that phenomenon."