Remember This: For 20 years, Timberwolf Amphitheater provided the soundtrack to our summers 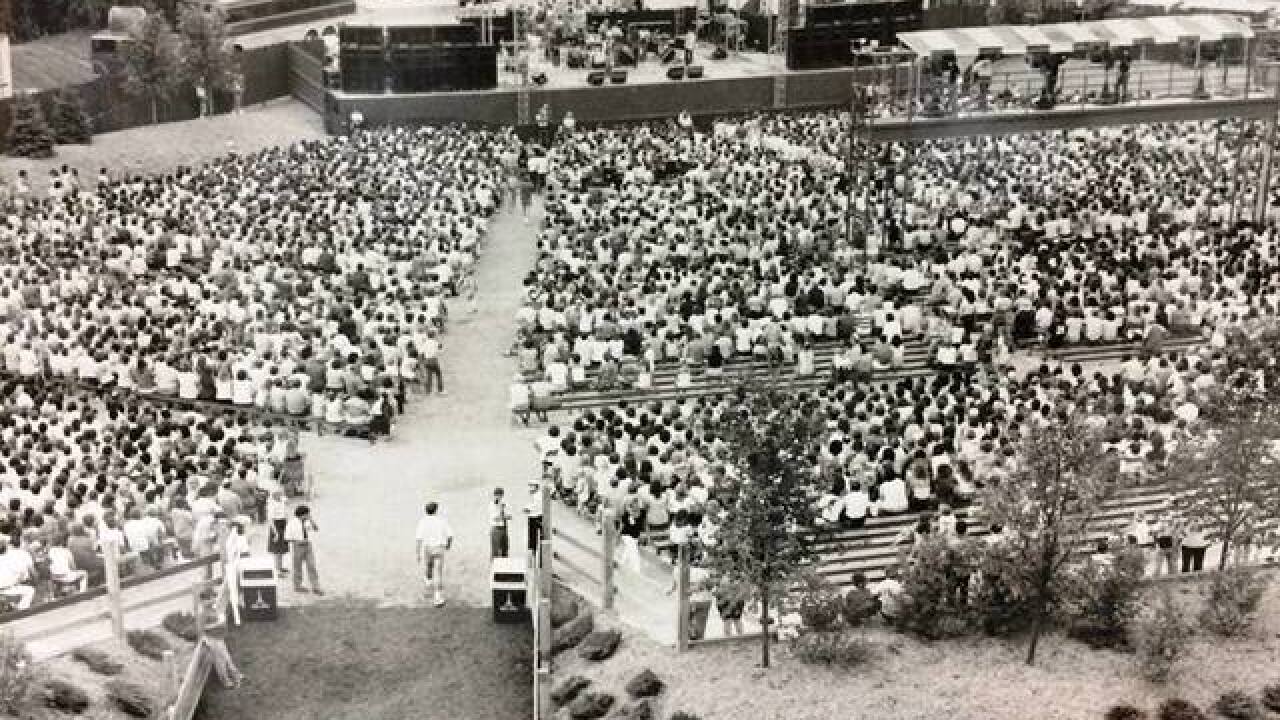 Copyright 2018 Scripps Media, Inc. All rights reserved. This material may not be published, broadcast, rewritten, or redistributed.
Provided
<p>A big crowd greets the band Air Supply at the first concert at Timberwolf Amphitheater at Kings Island, on July 9, 1982. (Photo provided by Kings Island)</p>

MASON, Ohio -- On summer evenings, visitors walking in to Kings Island are awash in the sounds of the season: the splash of water slides, peals of laughter, the unmistakable belly-rattling roar of roller coasters barreling down towering hills.

For many years, there was another layer to that symphony of sound: Songs from some of the biggest names in pop, rock and country music as they entertained crowds at the Timberwolf Amphitheater. With a capacity of 10,000, the outdoor facility played host to a Who's Who of musicians for more than 20 years.

It started on July 9, 1982, with chart-topping soft-rock group Air Supply. Over the years, everyone from the Beach Boys to Britney Spears, Duran Duran to Eric Clapton, James Taylor to the Pointer Sisters took the stage.

"That was really the place to go," said Louise Bruening McGuffin of Western Hills, who spent much of the 1980s jamming out to shows. "Everyone you knew went there -- lots of my friends."

McGuffin worked for Kings Productions from 1984-89, making costumes for Kings Island shows and characters. Although outfitting Fred Flintstone, Barney Rubble and their ilk was a pretty cool way to make a living, attending concerts by artists like the Moody Blues and Chicago made the summers.

No concert at Timberwolf was more memorable than Jimmy Buffett and the Coral Reefer Band. Buffett's shows at Riverbend Music Center have been the stuff of legend for many years, drawing national attention for the creativity, wild costumes and fanaticism of Parrotheads.

What many people don't know is that Parrothead fervor got its start at Timberwolf in 1985, as documented in "Escape to Margaritaville: The Musical."

McGuffin can still recall the sea of craziness: Partiers in parrot headgear, Hawaiian shirts and leis on every person, beach balls and beers and a 6-foot blow-up Gumby. One of the people in her group of friends that night was Kadir, a new acquaintance from Turkey whom she invited to experience an American concert.

"He was floored by it, totally in awe," McGuffin said. "He was like, 'Americans are crazy!' "

For Julia Hayes of Morrow, Buffett was also one of the concerts that she'll never forget. Working as a buyer at the time for Kings Island, Hayes got to enjoy Timberwolf shows with her colleagues, many of whom she still keeps in touch with decades later.

The Beach Boys concert was her favorite -- ‘I remember it like it was yesterday!" -- but she and her friends also saw everyone from Tears for Fears to Kenny Loggins. One of her funniest memories of those times came when a colleague brought her elderly mother to a country show and took pains to score seats right in front of the stage.

"But her mom was so mad because the sound system was so loud her pants legs vibrated the whole time," Hayes said.

Probably her coolest memory: As a buyer, she picked out and purchased all 10,000 of the numbers that were affixed to the venue's seating benches.

The music hasn't totally stopped at Kings Island, but it certainly is playing a different tune. Judging by social-media posts and chats with local music fans, many people thought Timberwolf closed years ago. That's not the case.

The venue still occupies the same footprint it has since 1982, said Chad Showalter, director of communications for Kings Island, but it no longer competes in the world of big-name popular music. Instead, the facility hosts many cheerleading and dance competitions, is rented for private events and, for 25 years, has been home to the popular three-day SpiritSong, a Christian music festival. (It will be held June 21-23 this year.)

The music has mellowed, but the memories live on for countless Cincinnatians. Toni Wright of Hyde Park can still hear the excited screams and see the frenzied sea of teen girls at a New Kids on the Block concert -- quite a heady experience for a Donnie Wahlberg superfan who was not quite 10 years old.

Like Hayes and McGuffin and, well, frankly, seemingly half the population of Cincinnati, Wright once worked at Kings Island -- for six years, in fact -- which afforded her the chance to catch plenty of Timberwolf shows. To her surprise, she discovered that she loved country music after catching a Faith Hill appearance, and she found herself loving the country music festivals most of all.

Those shows were always sellouts, the music was catchy, the overall vibe was laid-back and fun, and the people-watching was endlessly entertaining.

As soundtracks to the summer go, it doesn't get much better than that.